Haeju is the capital South Hwanghae Province and is located on the west coast of the DPRK. The northern part of has a series of ridges whereas the southern part leads to the sea. It has been since times past a major port city for trade with China.

Located by Haeju Bay, this area is home to some beautiful natural scenery as well as ancient relics. We usually arrange trips here as part of our independent tours for those interested in medieval Korean history as well as in hiking. Below we list the main sites that you can visit in this relatively unknown to foreigners part of North Korea.

Approximately 750 metres high, offers some absolutely stunning views of a lake, hills and the valleys that surround it. Those interested in Korean history can visit the the Hyonam and Myoum temples as well as the mountain fort.

Located in between Haeju and Sinwon, which is where the goat farm is located, the highest point here is Sollyu Peak and almost 950 metres high. The Suyangsan Waterfall has water plunging down from no less than 128 metres.

Another point of interest here is a fort built in the Koguryo Kingdom (37 BC - 668 AD) which was eventually defeated by Silla which, in turn, was defeated by the Koryo Dynasty (almost 300 years after the diminish of the Koguryo Kingdom). Many founders of the Balhae Kingdom (Bohai Kingdom in Chinese) were former members of the Koguryo Dynasty. Please check our Helong page for more information regarding the Bohai Kingdom which was established in the now Korean Autonomous Prefecture of China, Yanbian. The Mt. Suyang fortress is just over 5 kilometres long and links various peaks. Bastions and sites used by generals can still be spotted and hikes on its walls can be arranged.

As we leave the provincial capital and before arriving in Sinchon a stop at a local goat farm in Sinwon country, Kyenam Farm, can be arranged. The farm itself has more than just goats and one of the farm’s staff will guide us around the facilities. Going to a farm allows us to see how farmers work in North Korea and have a greater understanding of the system in the country (please note that this is not a cooperative farm). 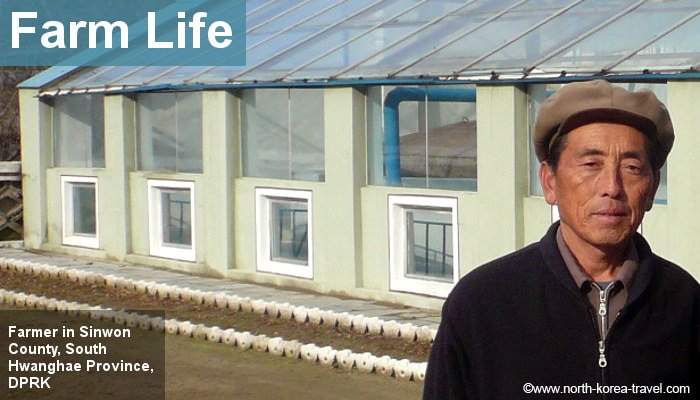 The city of Haeju itself is interesting too and not that often visited by foreigners. There is a statue of a younger Kim Il Sung in the central square and many murals showing the achievements of the President.

This consists of 9 valleys which holds many historical remains and buildings. One example is the Sohyon Lecture Hall which is located in the 5th Valley (Unbyong) of Sokdamgugok which was used by a confucian Scholar Ri I in the 1500s.

After a visit to this city a trip to Sinchon is usually arranged. One of the most fascinating parts of this route is the route itself. Roads are literally off the beaten track and more often than not turn into smaller bumpier roads going through rural areas of North Korea.

If you are interested in knowing more about the historical aspects of Korea as well as in outdoor activities we strongly recommend a trip to this region of the DPRK.