Panmunjom - the scariest place on Earth? 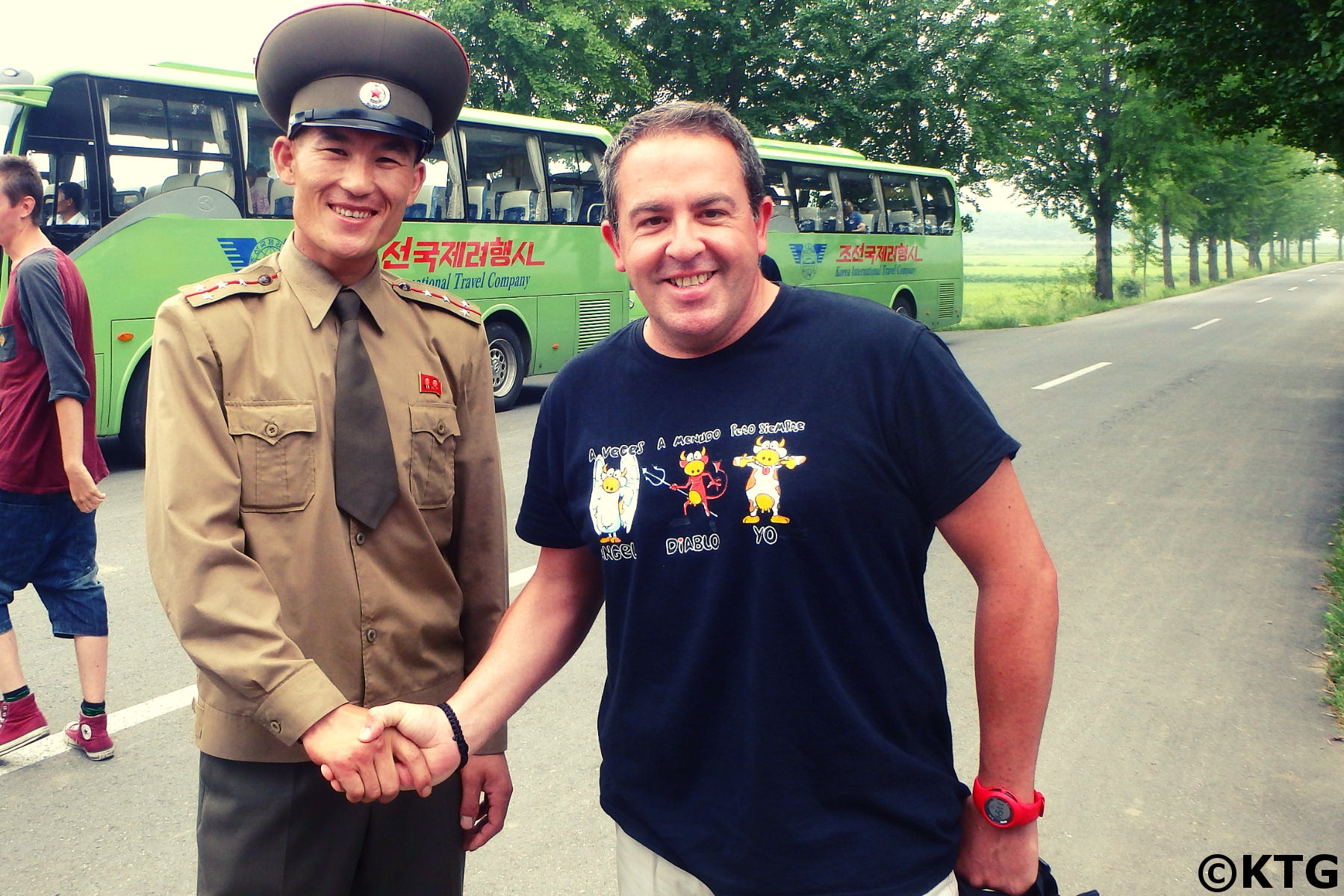 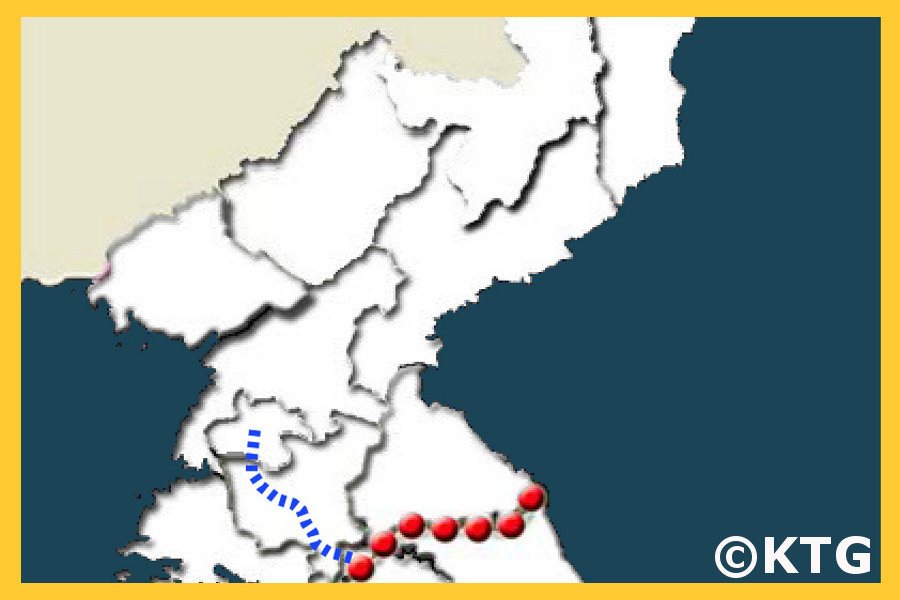 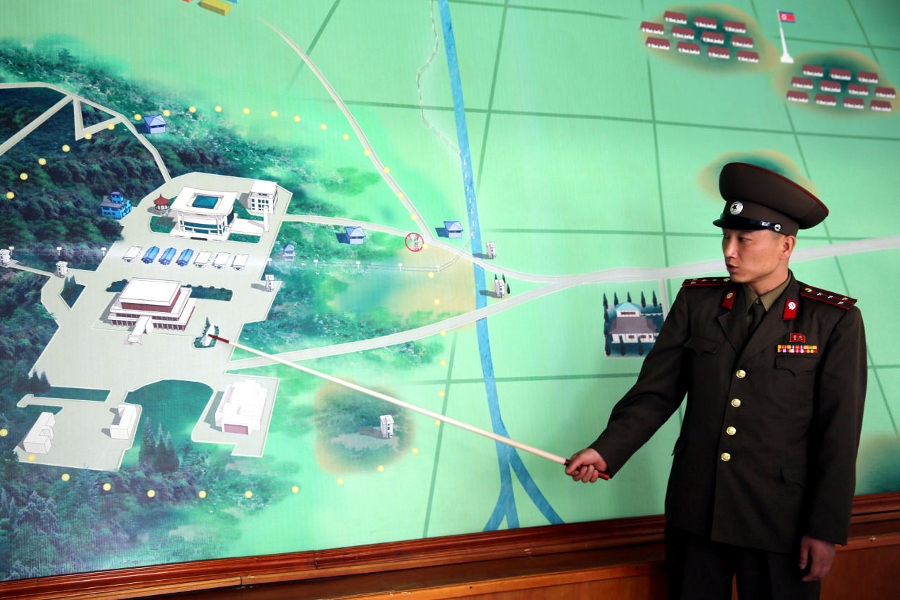 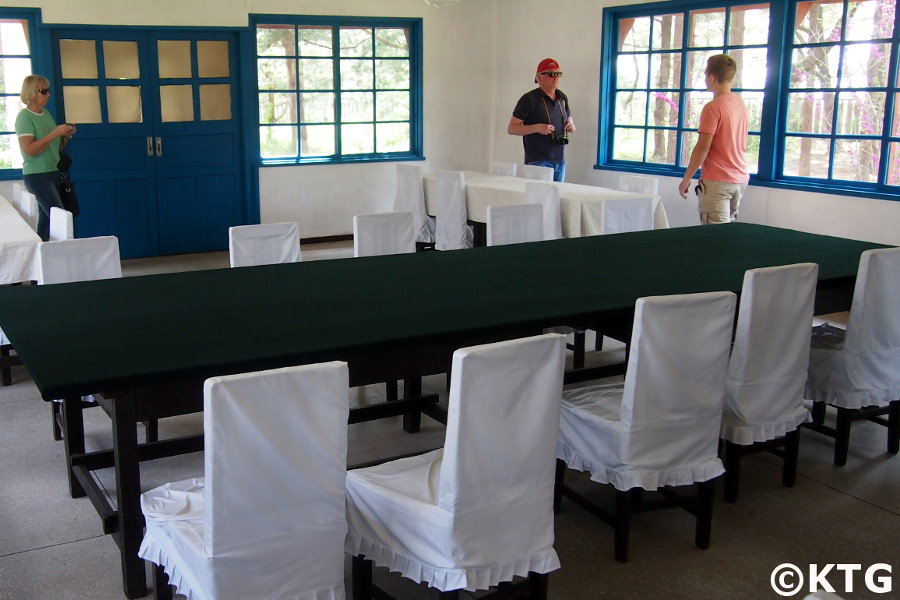 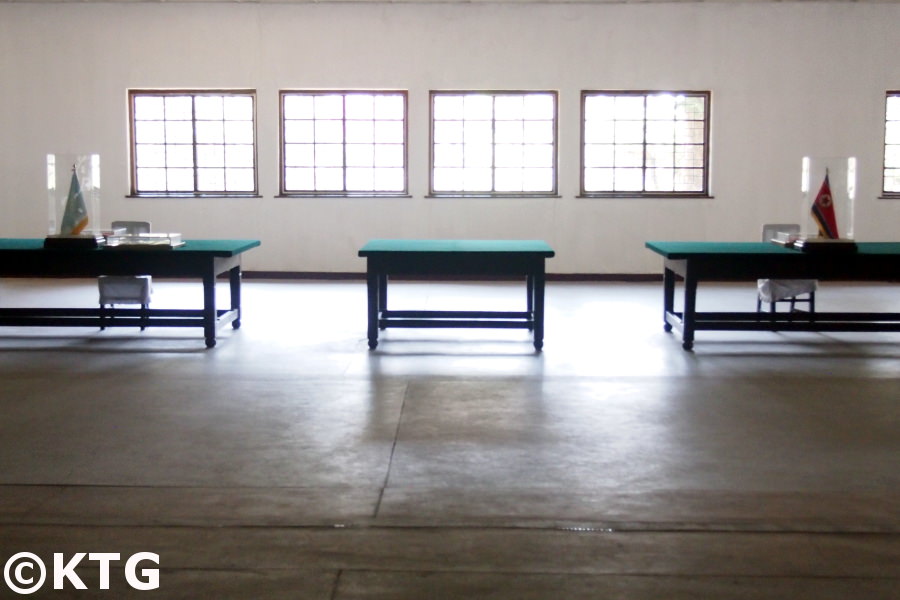 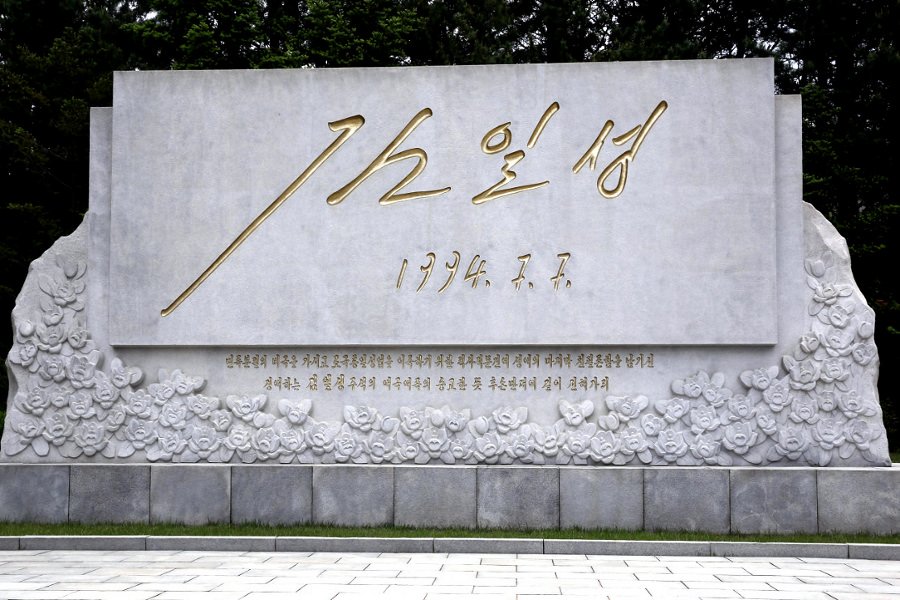 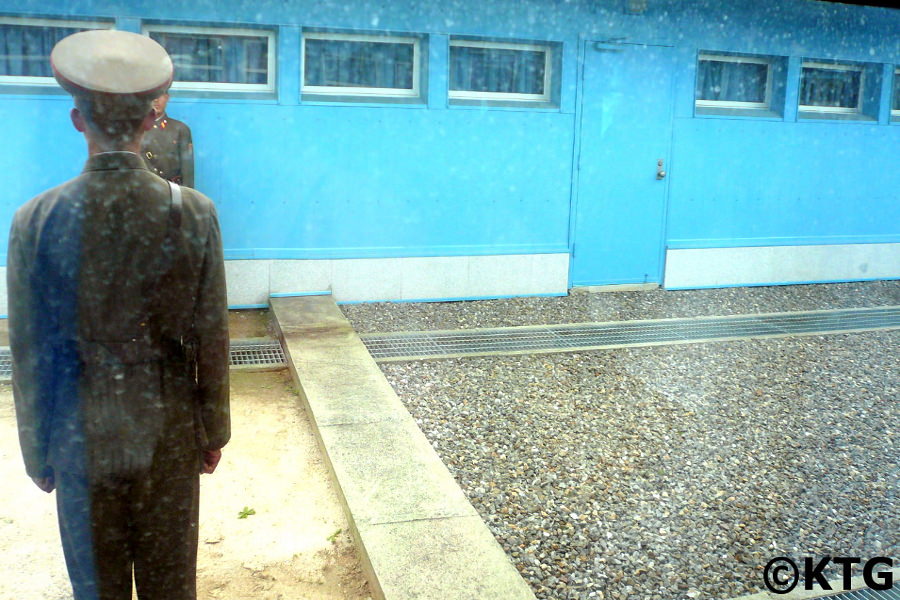 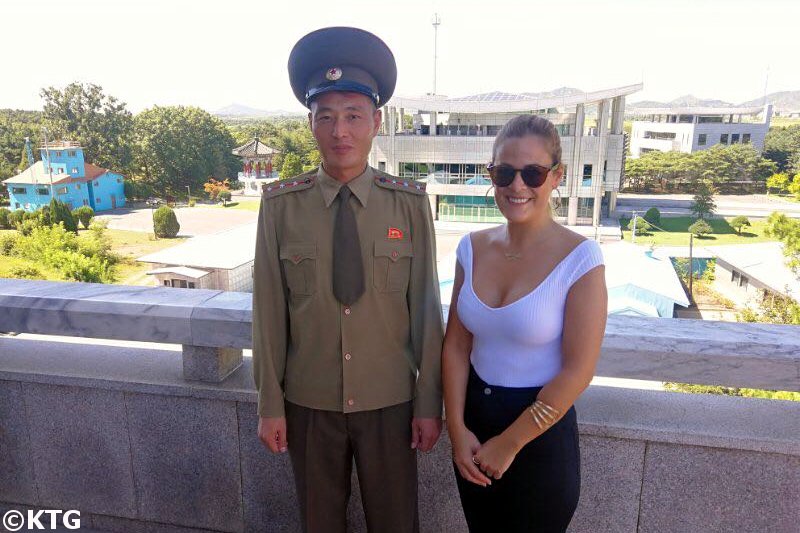 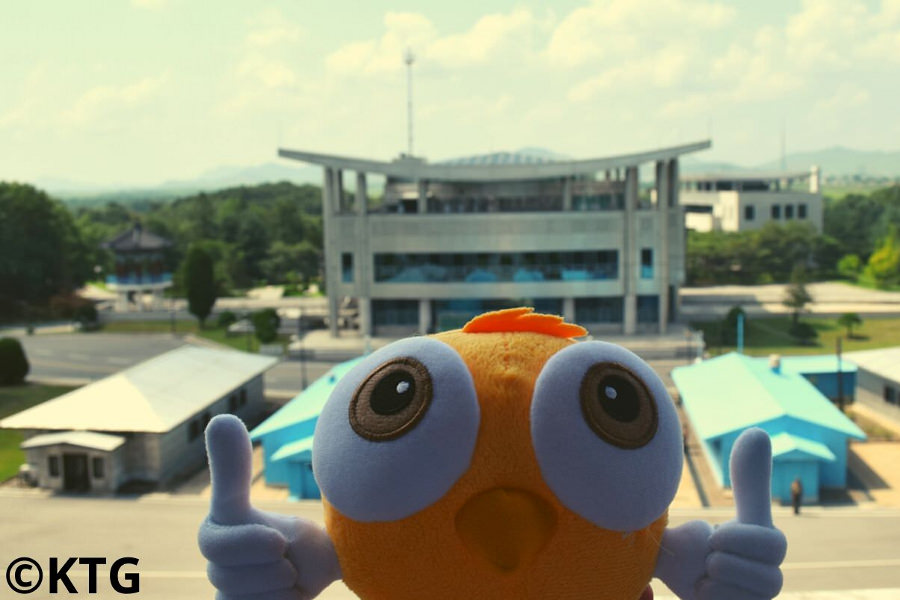 Panmunjom is where the Korean War Armistice was signed in 1953. North and South Korea are still technically at war as peace treaty was never signed.

It was agreed that a no-man's land 4 kilometres wide and 250 kilometres long stretching across the Korean Peninsula would be created. This is known as the Demilitarised Zone (DMZ). The most militarised de-militarised zone and borderline in the world, it was described by former US President Bill Clinton as the "scariest place on Earth".

The scariest place on Earth? KPA officer shakes hands with a traveller from KTG before we move on to the Hall of Armistice Talks.

Panmunjom (Panmunjeom) is the most visited place of the DMZ. Many tours run from Seoul to the Joint Security Area. If joining one of our tours you will have the chance to see the dividing line from "the other side" and hear the North Korean version of the Korean War. 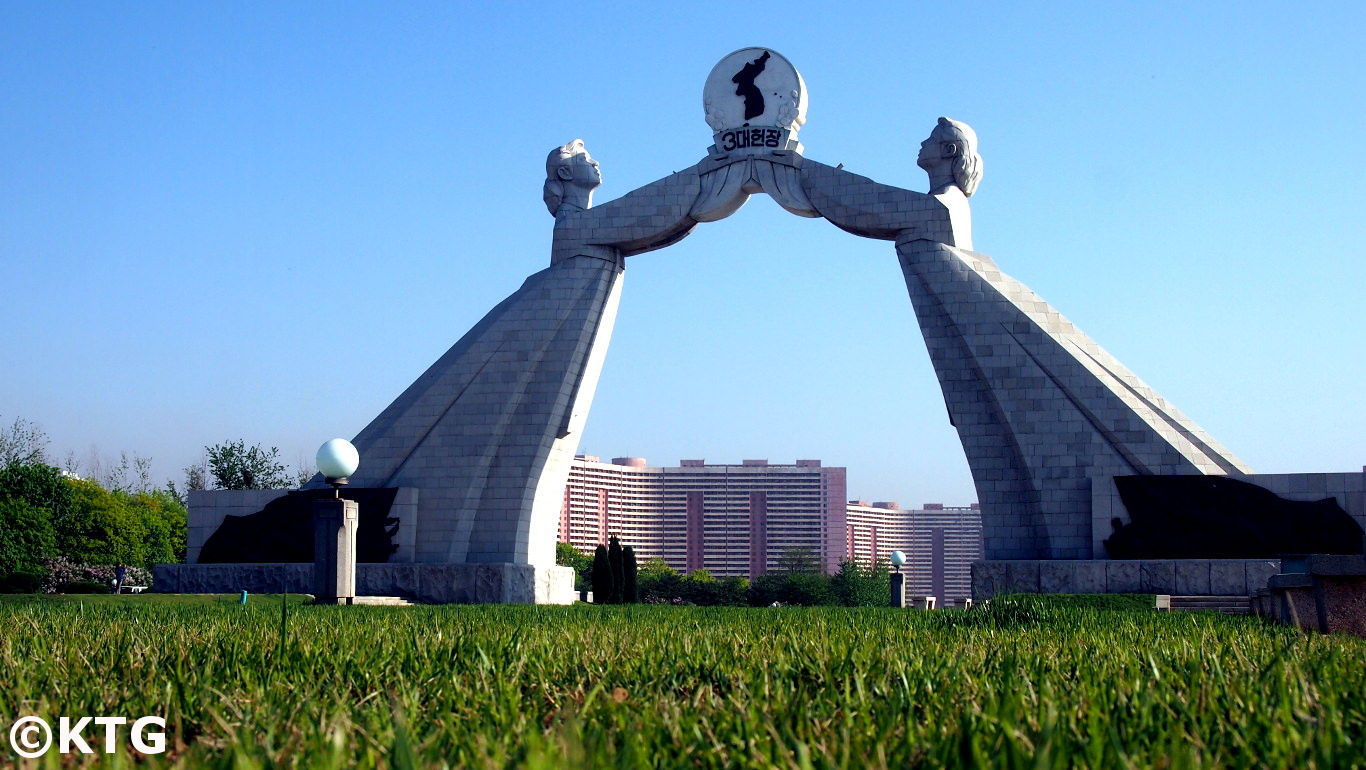 Panmunjom is located 168 kilometres south of Pyongyang and just 8 km away from Kaesong city. The ride takes around 3 hours each way. 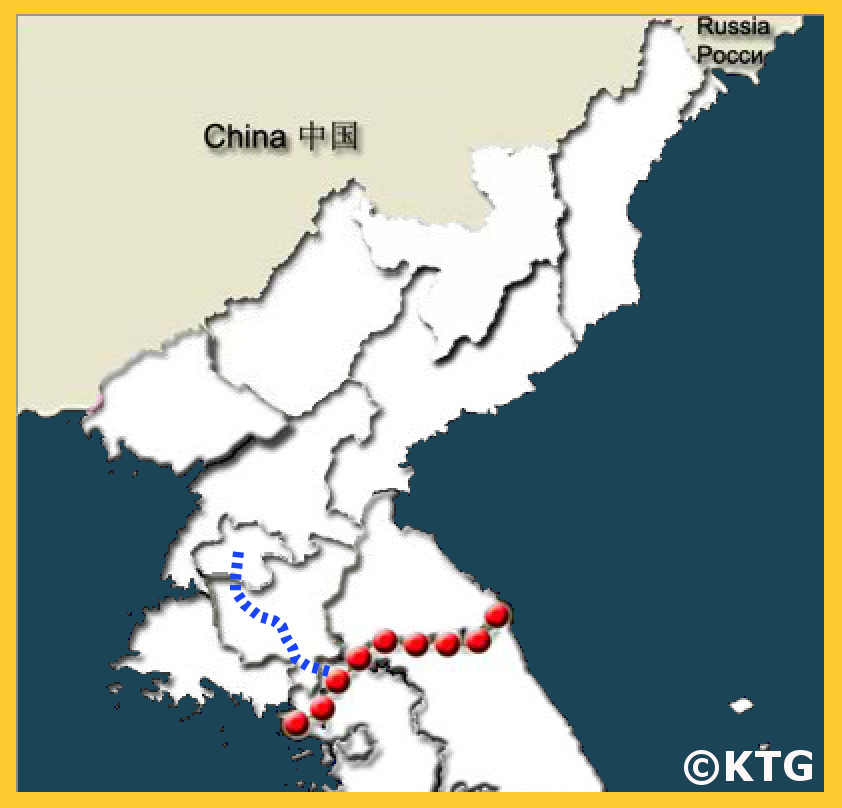 When heading there we have a break at a tea house that is built over the highway that connects Pyongyang to Kaesong; Tongil (meaning reunification in Korean) highway. We usually have a 10 minute break there. You have some coffee, tea, snacks and buy souvenirs too. 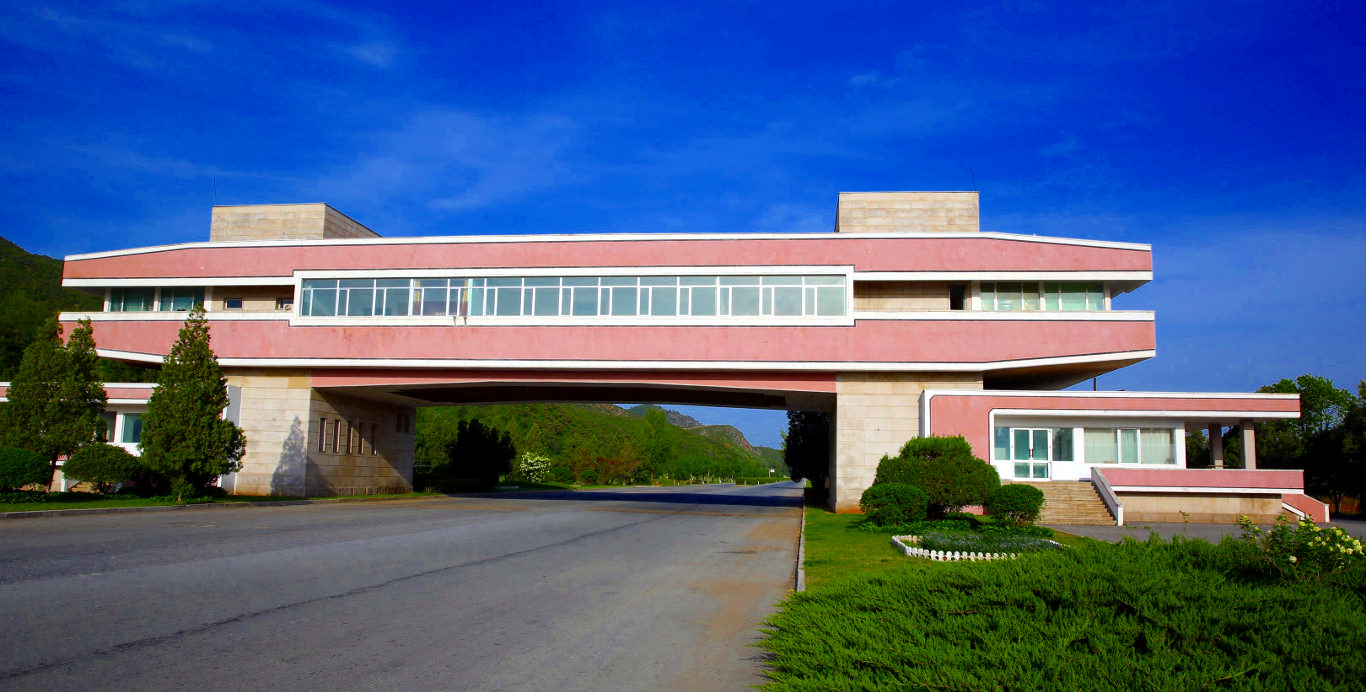 Tip: not many travellers do this, but if you go up the tea house you can get some great shots of the highway! Check our Youtube video below:

Once we arrive at the car park of Panmunjom we get off our bus/car. There is a building to our right and toilettes are on the left hand side. 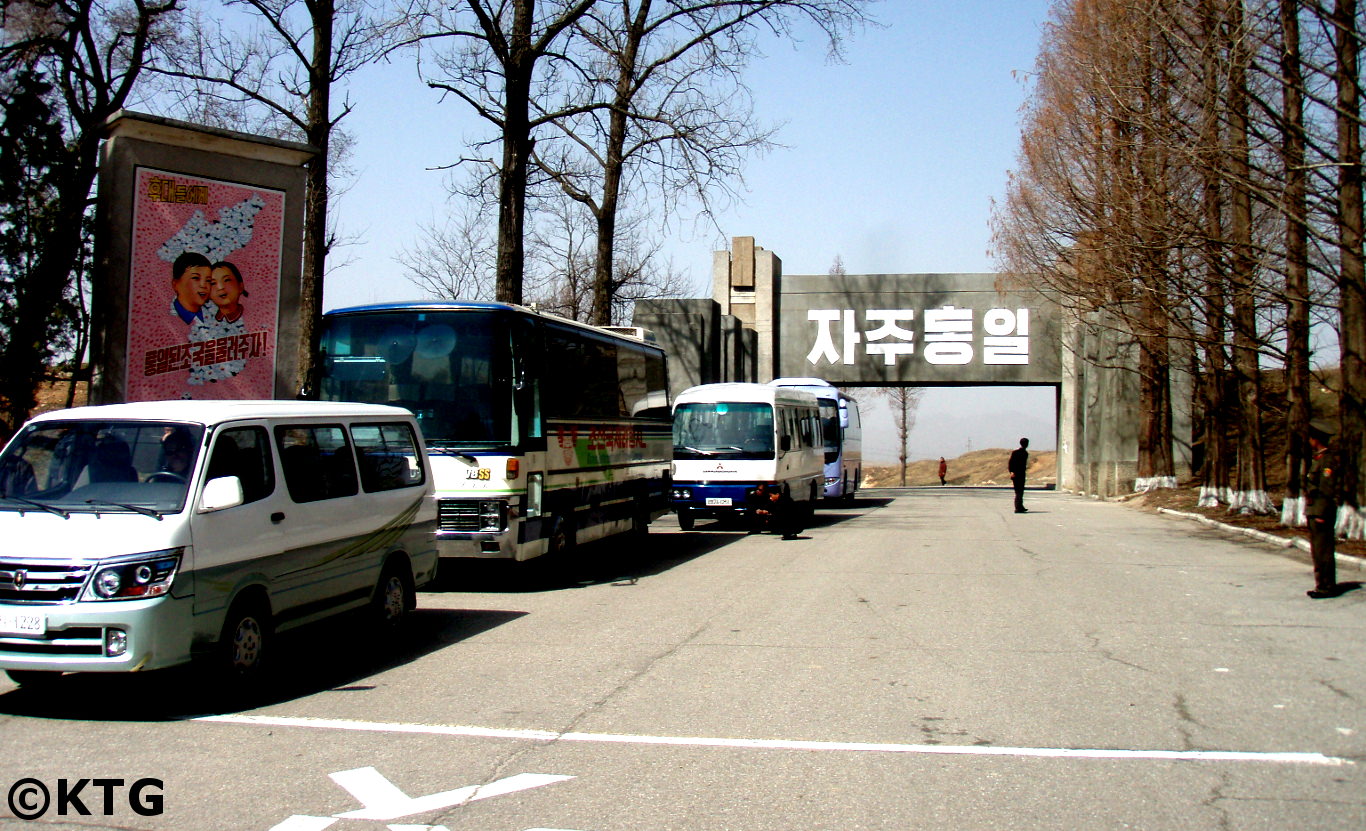 The building to the right consists of a souvenir shop and a room where a soldier will give us a briefing about the Truce Village. After the soldier gives his briefing we exit the room and line up. Each group is then to walk straight, one by one, back on the bus where at least a soldier (sometimes more) will accompany us. 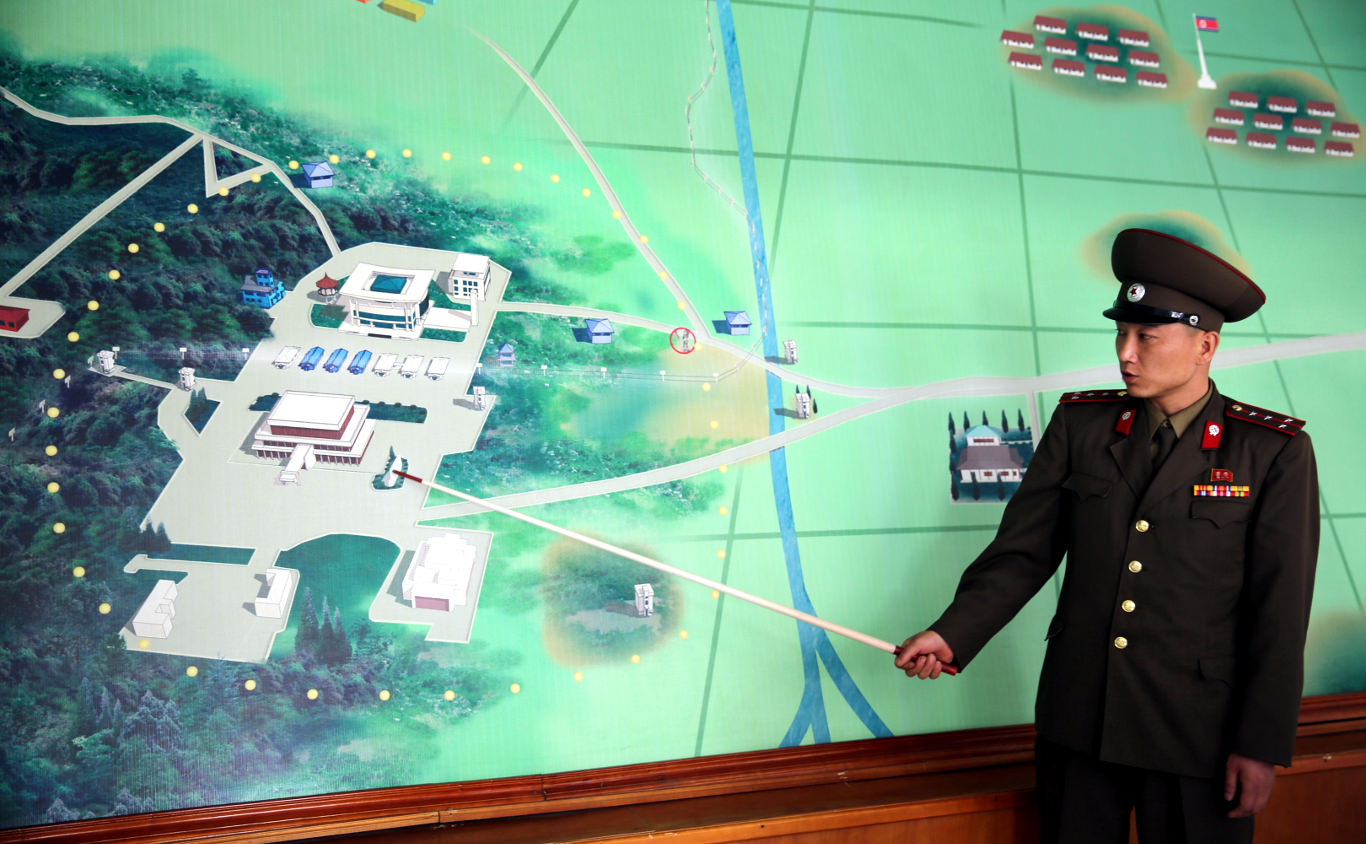 KPA officer briefing us on Panmunjom at the DMZ.

We then drive from there to the Peace Museum which is where negotiations took place during the war. As we head there you can see locals farming the lands and, almost out of nowhere two large flag poles, rising high in the sky, one with a giant DPRK flag and, the one on the South Korean side, with a South Korean flag. 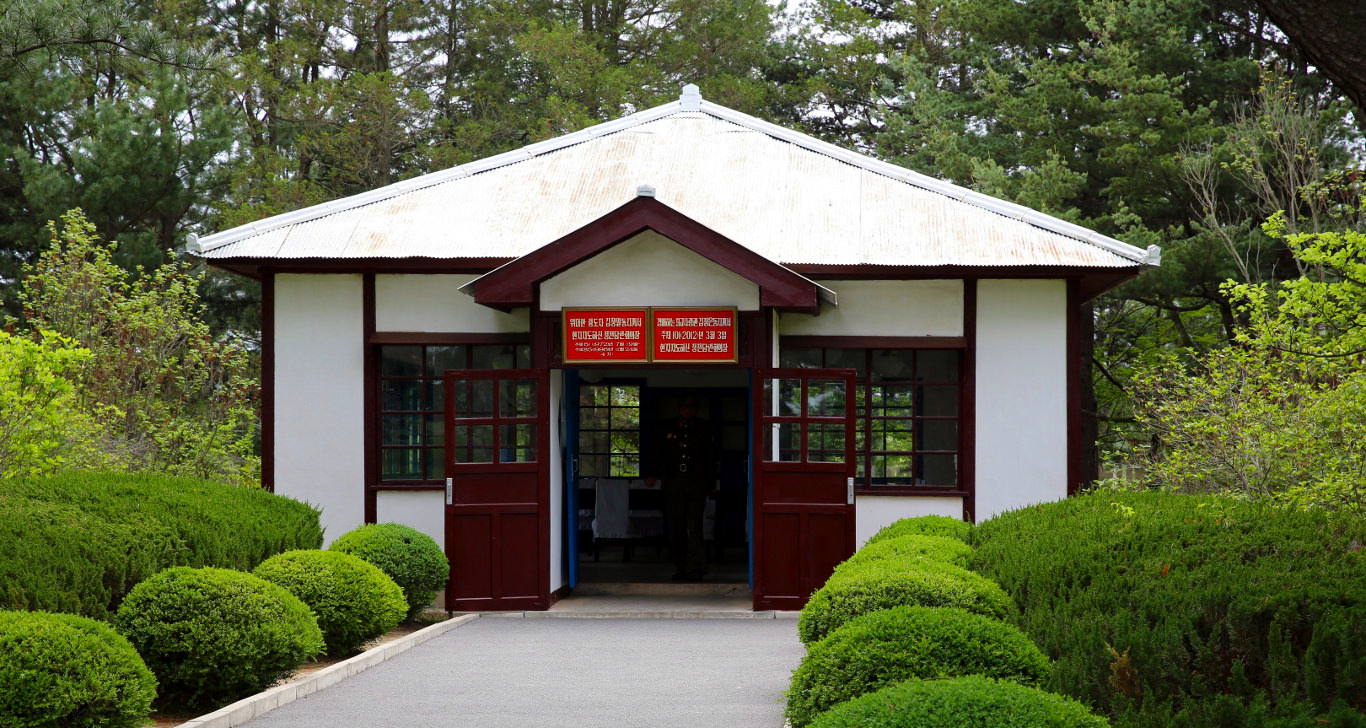 When we get off the bus we will have to line up again and the soldier will guide us. We see where negotiations between the DPRK and US led forces took place. The original tables and chairs are still there. 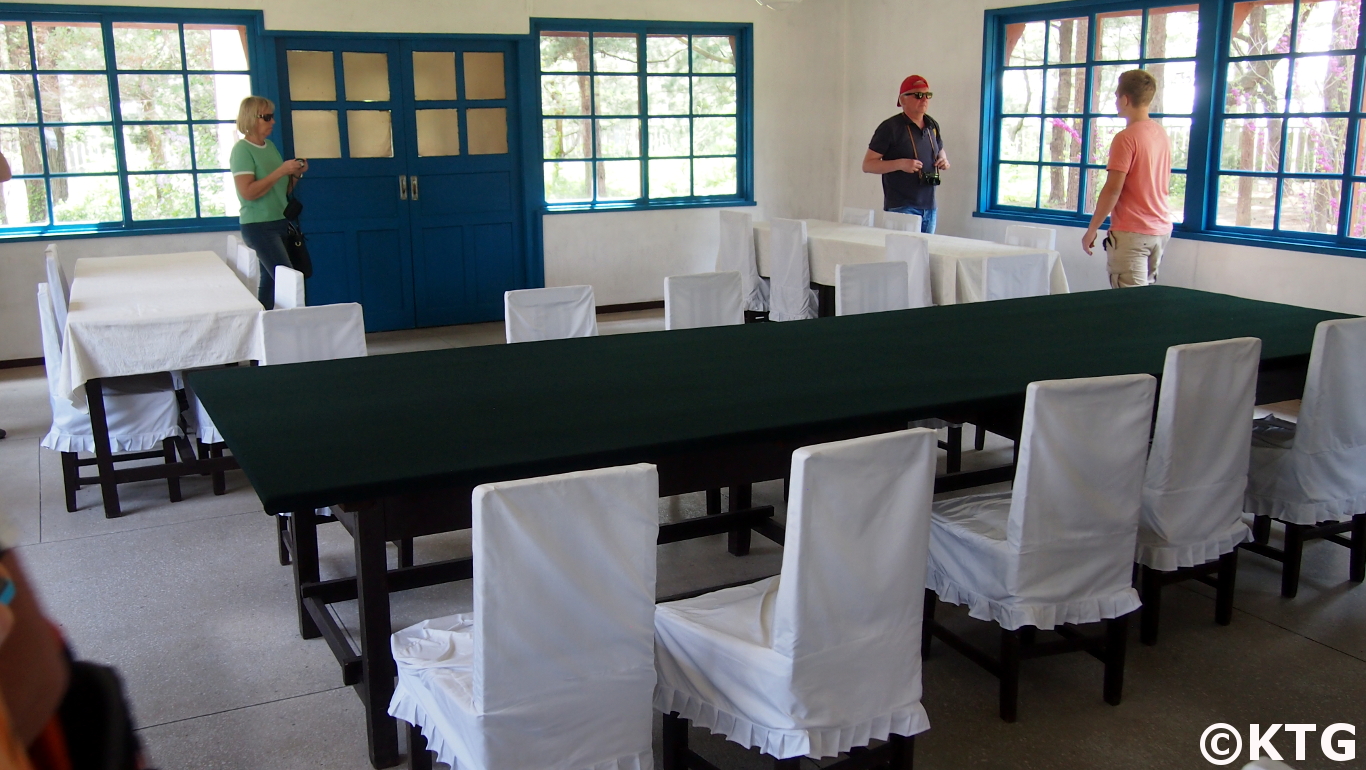 Next is the museum where the armistice was signed. You can see the original UN flag used as well as pictures and weapons related to Panmunjom. 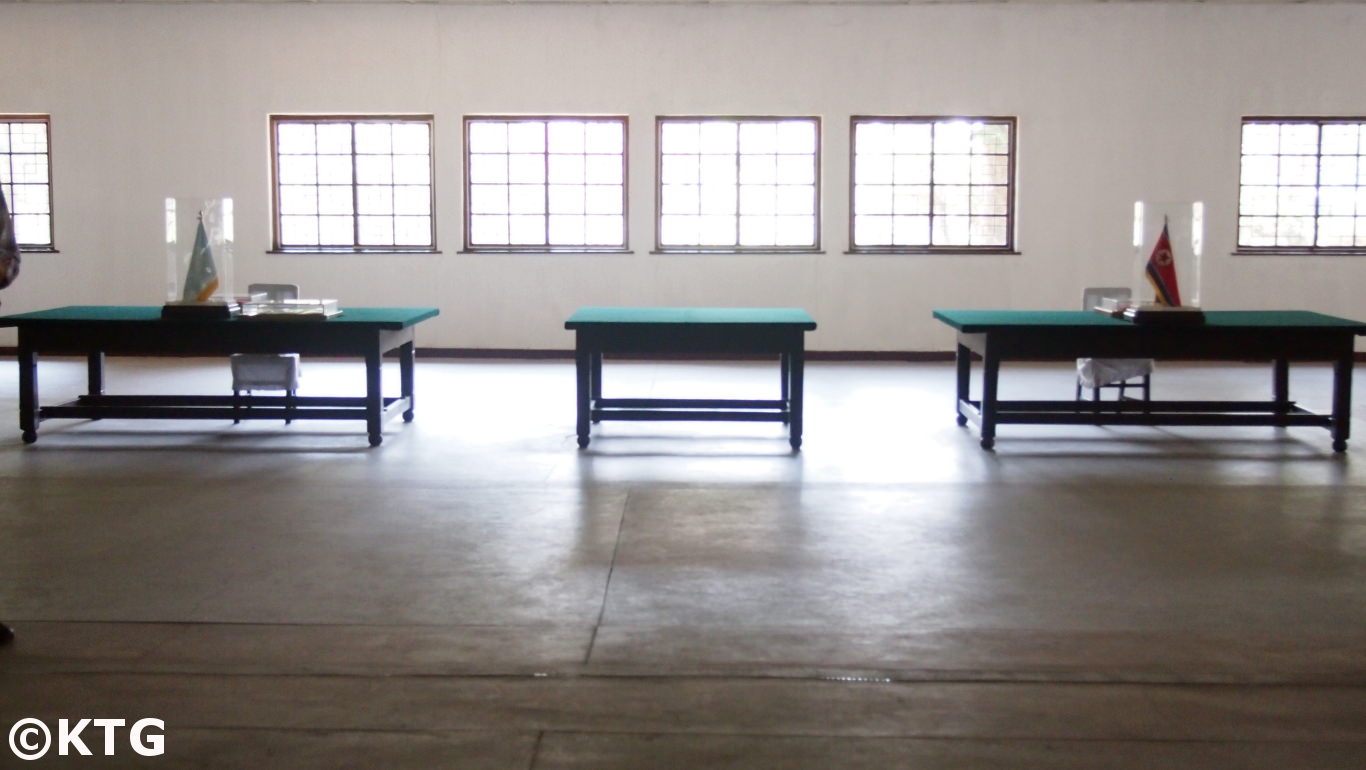 The Korean War Armistice room can be seen in the image above. It was built in only 5 days by the North Koreans who refused to sign the armistice agreement in a temporary tent as suggested by the US. This hall had 900 square metres and is where the armistice agreement was finally signed. The original UN flag, tables and chairs used are preserved in this hall. 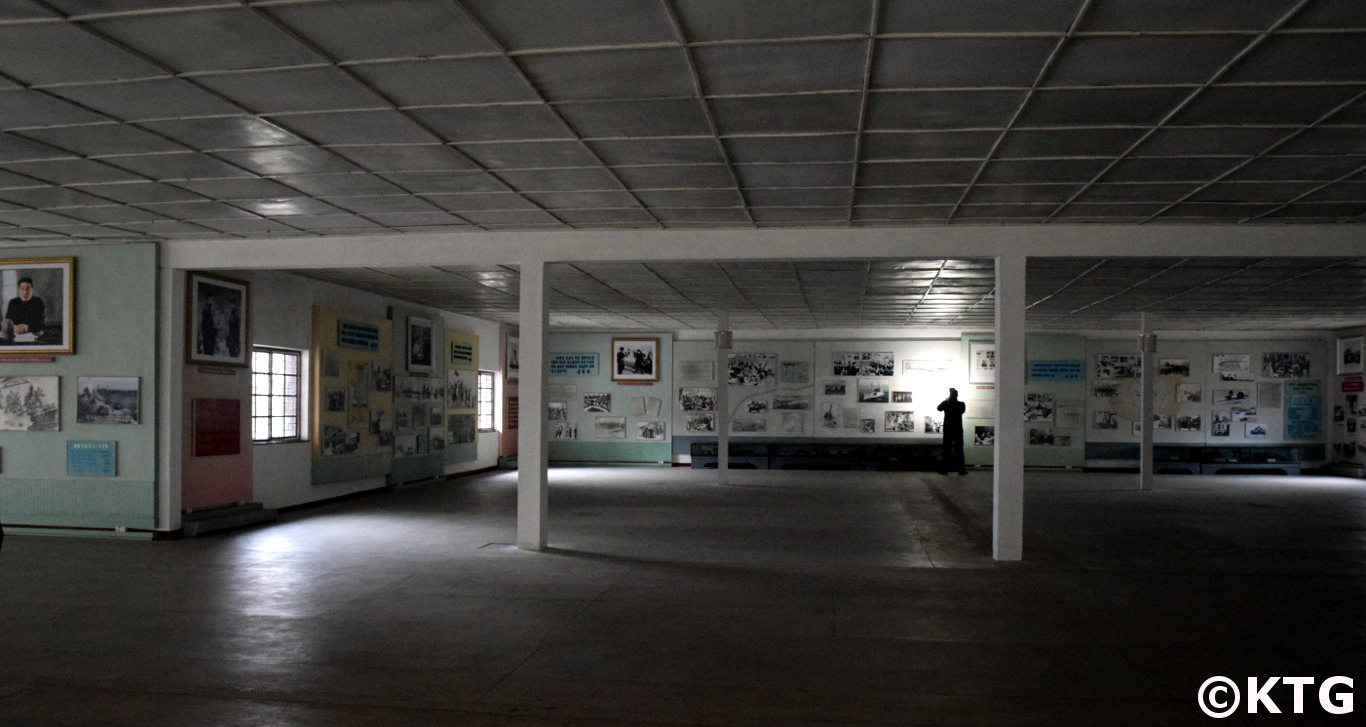 Pictures and weapons can also be seen in the Peace Museum. 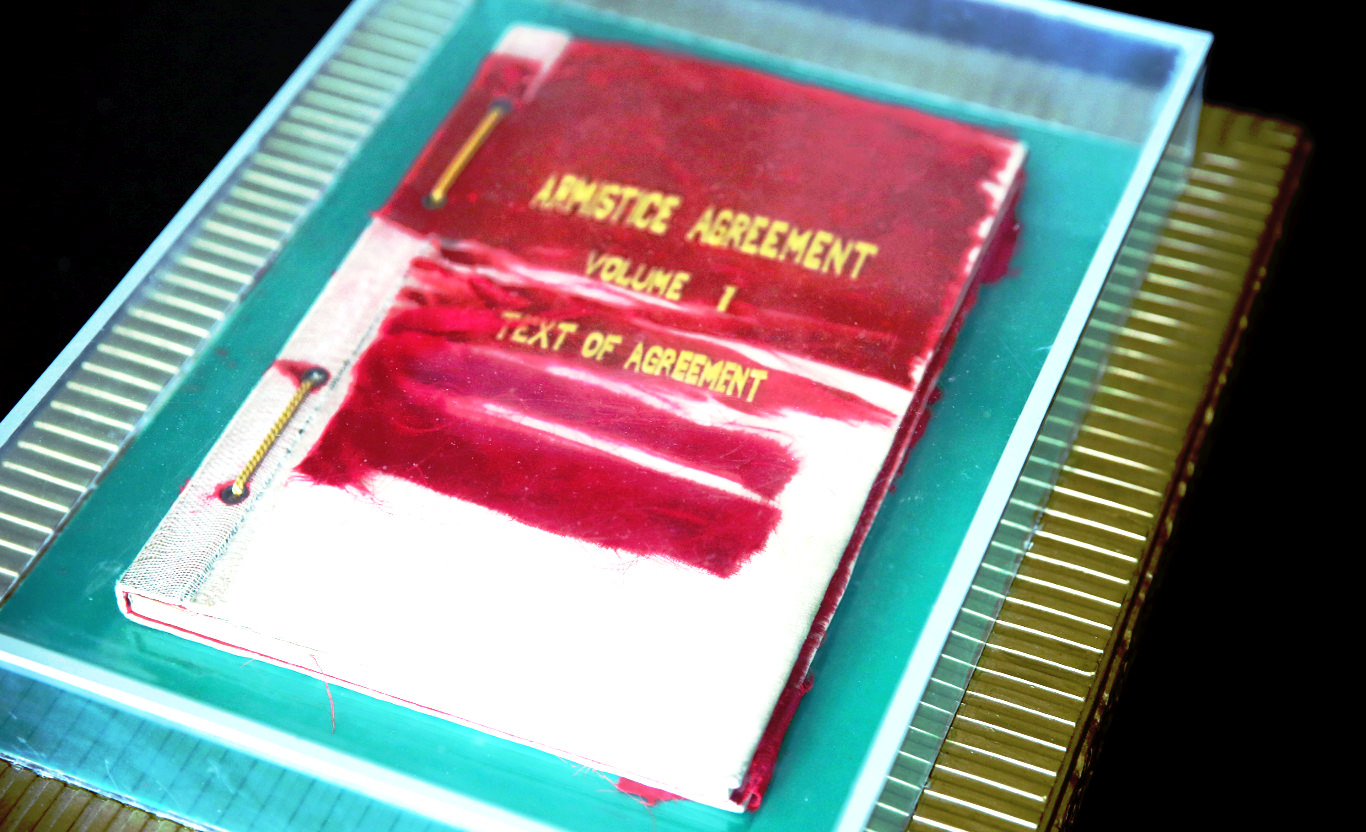 The Korean peninsula witnessed the first Cold War armed conflict, involving North and South Korean, US, UN and Chinese troops. The peace treaty between the North and South has not yet been signed, making this conflict longer than its origin. 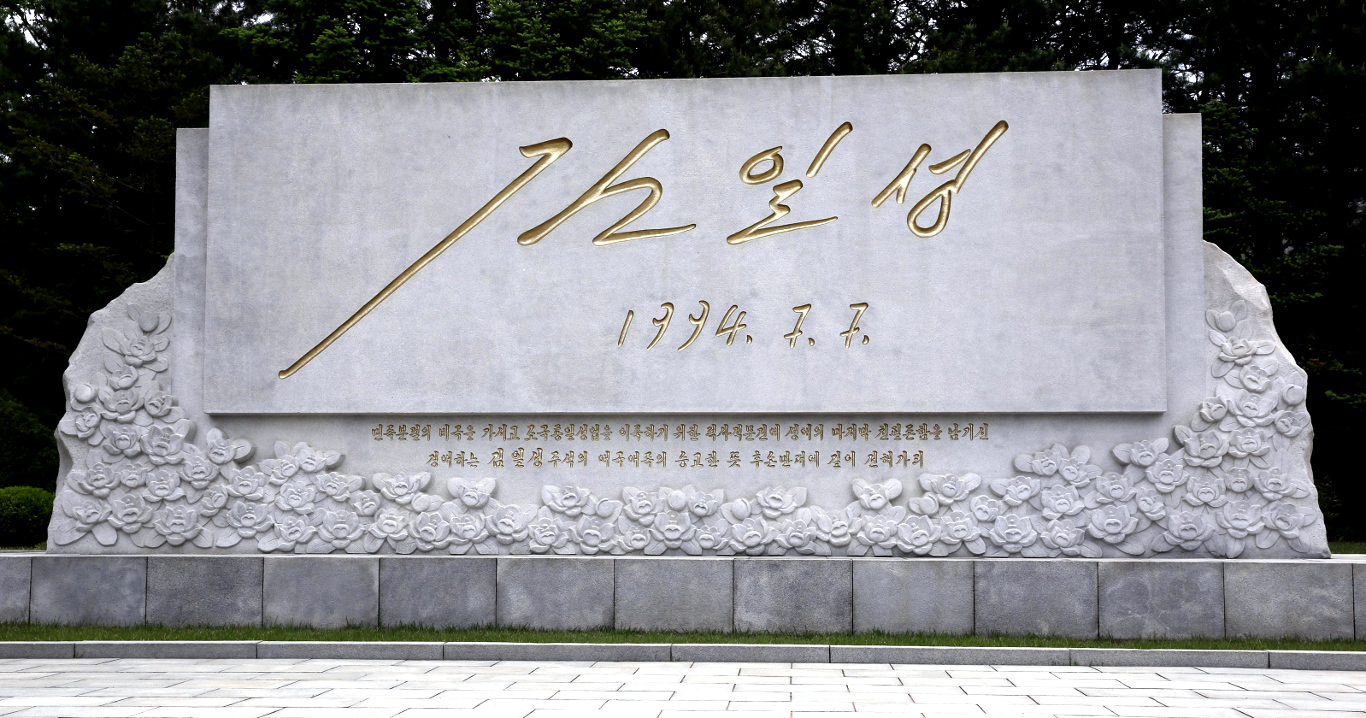 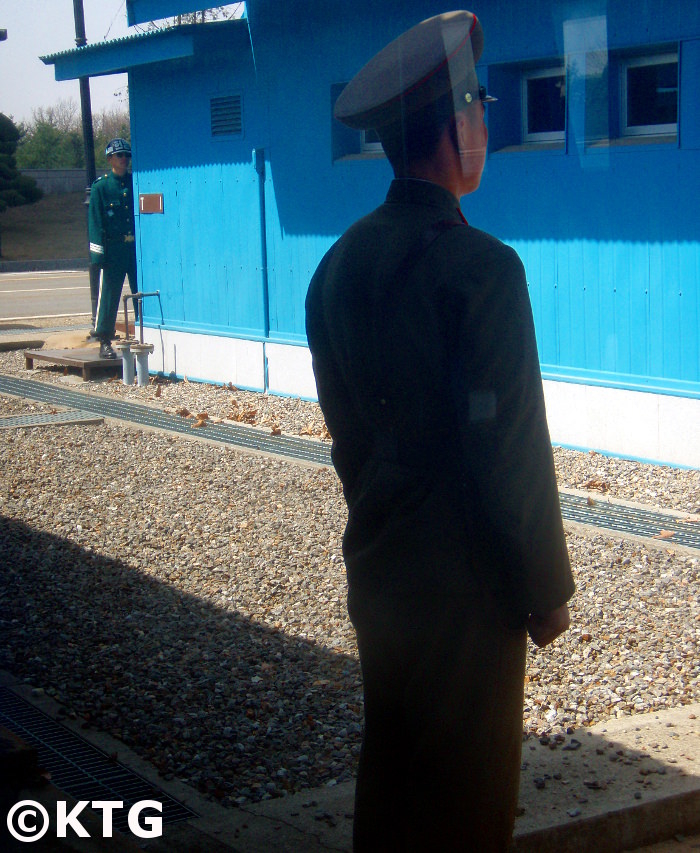 We keep walking towards the demarcation line and, all of the sudden, we are face to face with the blue negotiation rooms that sit on the line that separates both Koreas, the famous Freedom Building in South Korea in the background. Here we are, what many describe as a trip highlight; the Military Demarcation Line.

DMZ North and South Korean soldiers seen in the picture. Despite the signing of an armistice, there is no peace treaty. As a result the two sides are still technically at war.

The concrete slab shown below separates the Korean Peninsula and only a few meters separate the North and South Korean soldiers. Tension is sometimes almost tangible here. We have seen for instance DPRK soldiers walk close up to the concrete slab and take pictures of their South Korean counterparts who were showing US military personnel around.

Armed conflicts have sporadically taken place since 1953, though these have decreased in the past few years. 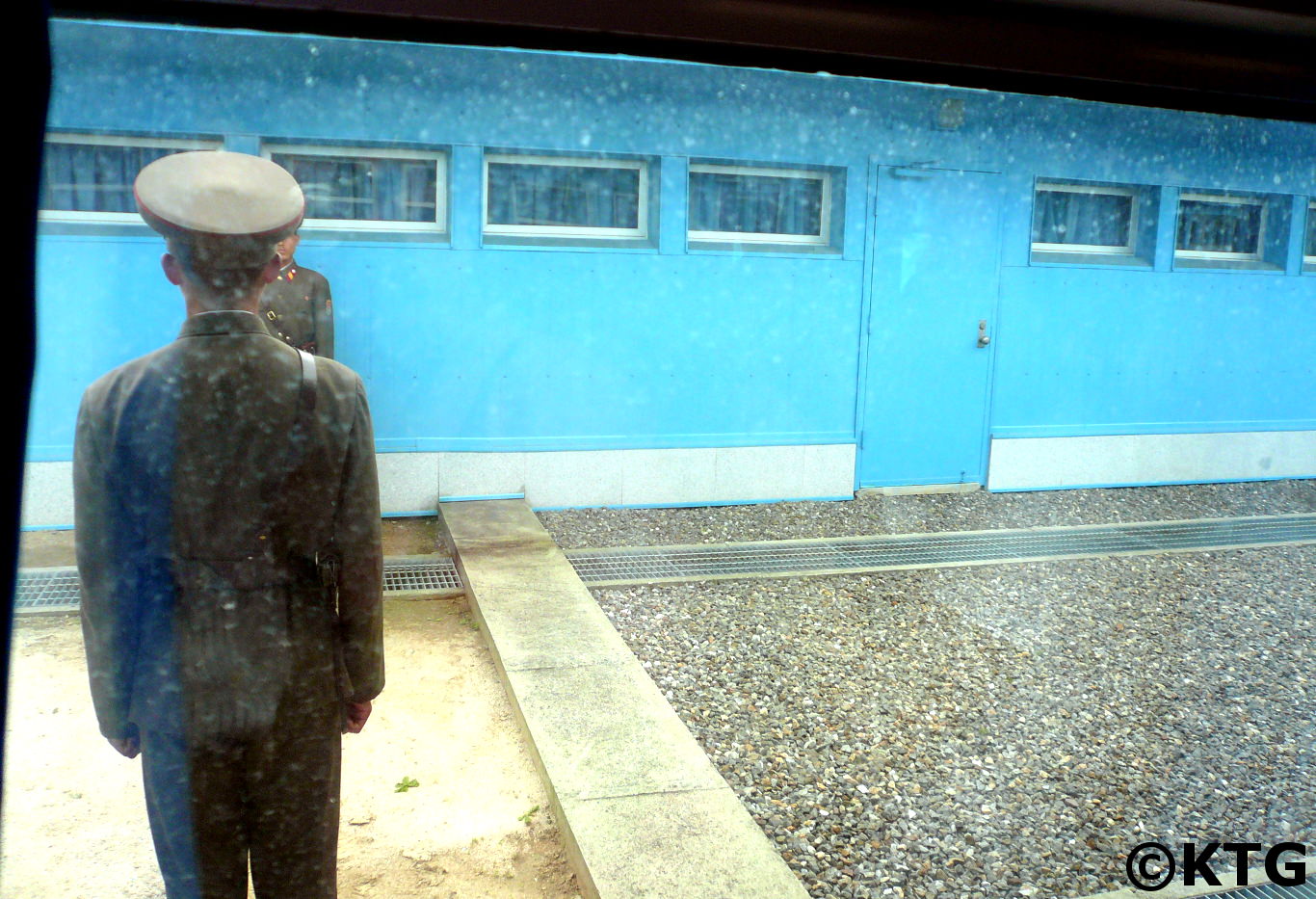 North and South Korean soldiers take turns in entering the Military Armistice Commission building that runs on the concrete slab that divides the peninsula into two places with completely different political ideologies.

If one of the negotiation buildings is opened travellers have the opportunity to enter and to technically be in South Korea. There is a table exactly in the middle of the room with a microphone cable which officially marks the border between North and South Korea. On the South Korea side of the room two DPRK soldiers guard the door that leads to South Korea.

South Korean soldiers and tourists visiting from South Korea can be sometimes seen too. 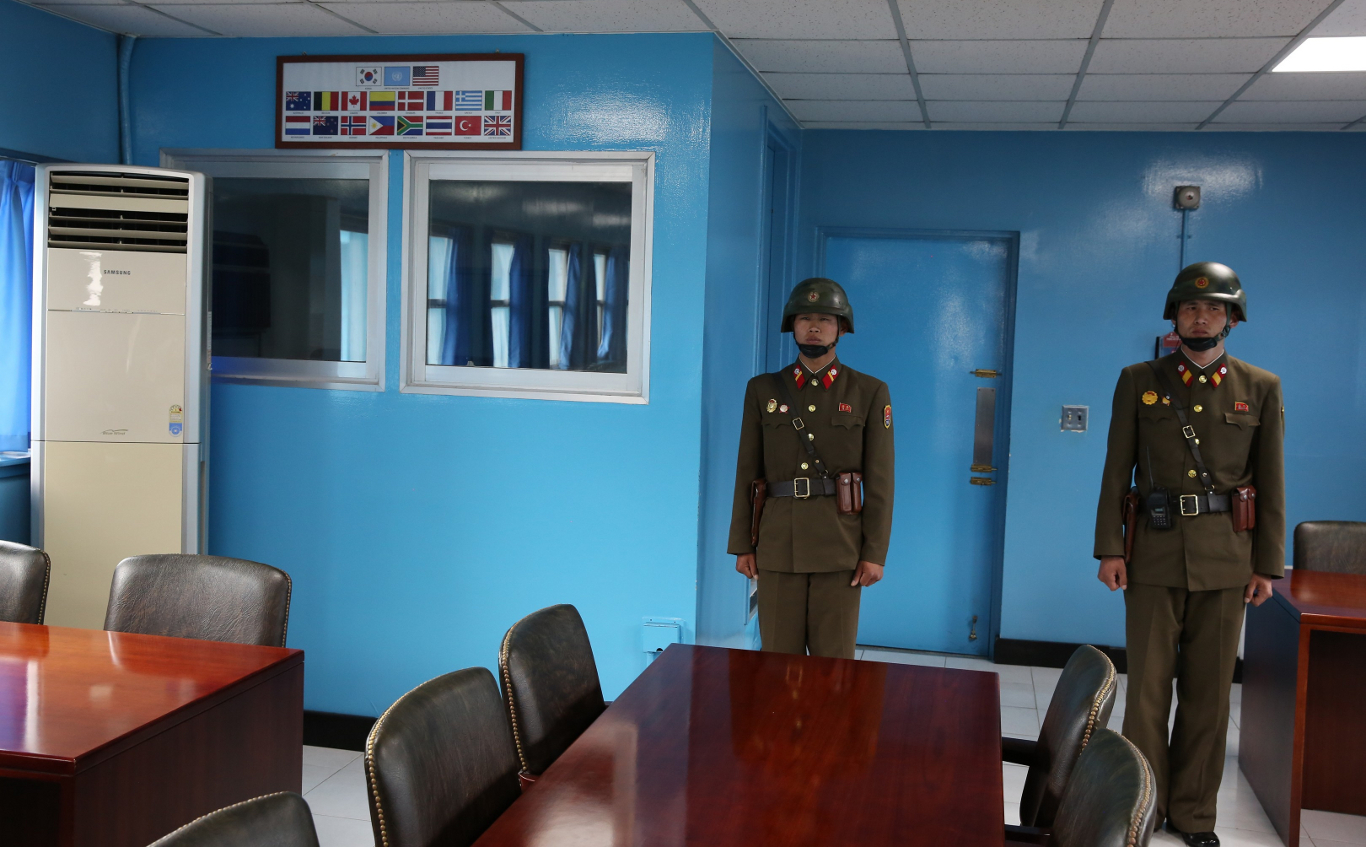 Panmunjom - North Korean soldiers cover the southern door of the building that crosses the demarcation line. They are literally standing in South Korea. 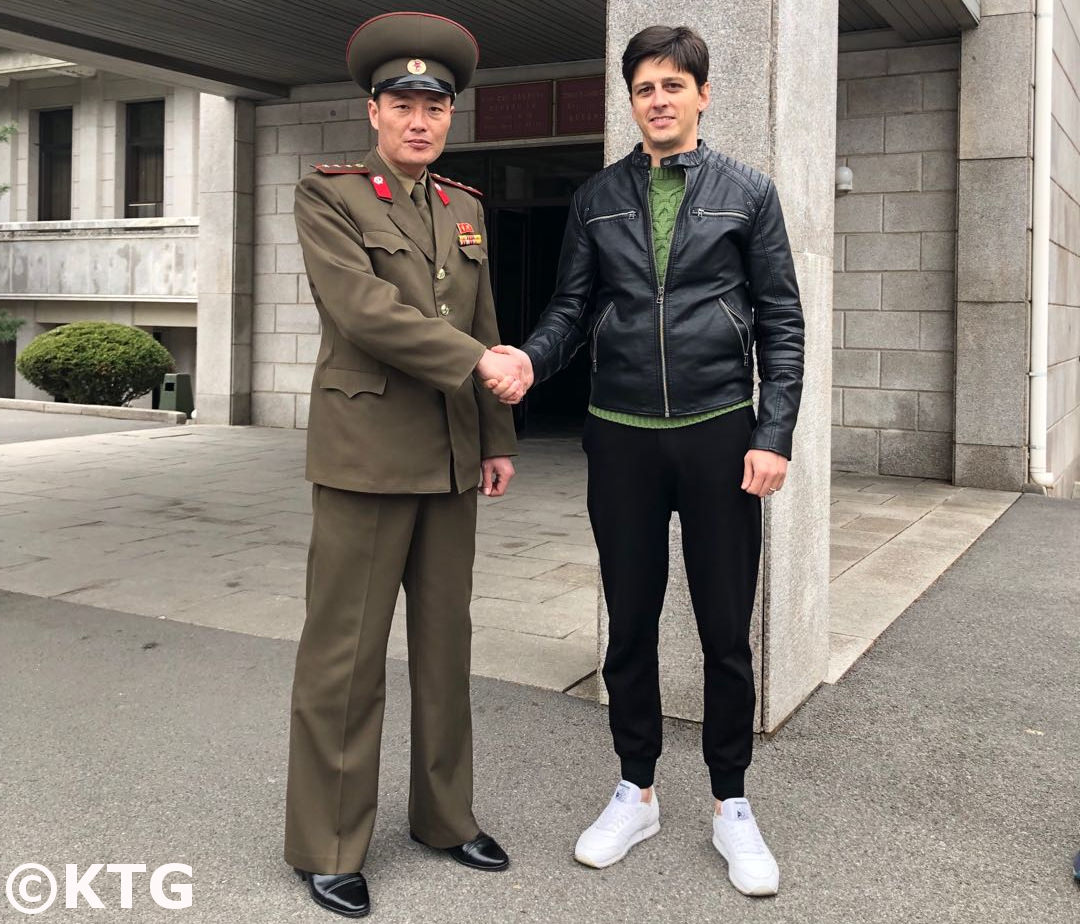 We are absolutely not allowed to cross this line (except for when inside the blue negotiation room when you can go to the other side of the table which is technically in South Korea). It is common for soldiers from the South to glare through the window when visitors from the North come in and vice versa. There are microphones in the room which also mark the dividing line. They record 24/7.

Panmunjom Military Demarcation Line - this microphone line divides the two Koreas; a line that has divided the peninsula and one same people for decades.

After staying here for a while you will be escorted out of the blue building and the North Korean soldiers will leave too locking the Northern door (where you come in and out the building) and South Korean soldiers will enter if they have a group. Then two of them will stand in front of the northern door. It has become less common in recent years to be able to see tourists coming in from South Korea when we go to the DMZ and we have been told that visits from the South are arranged at different times now. Please bear in mind that visitors are not allowed to step behind these soldiers.

We then head to Panmungak, the building facing the negotiation rooms, to have a clear view of the Military Demarcation Line. It's a great place for pictures! It was built in 1969. In South Korea they have the Freedom House which you will notice is full of CCTVs. 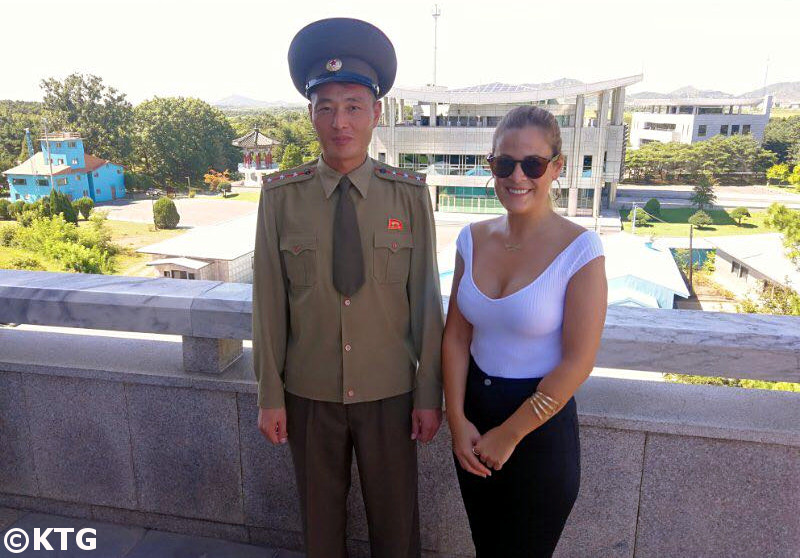 DMZ tours - North Korean soldier poses with a KTG traveller at the terrace of Panmungak across from the demarcation line that divides the peninsula into two.

Wildlife in the DMZ

The DMZ is 250 km long and 4 km wide, running roughly across the 38th parallel from the east coast to the west coast of the Korean peninsula. People are not allowed in the DMZ (apart from in Pamunjom and on the Donghae Bukbu line on the east coast) and as a result this buffer zone has become a wildlife reserve. 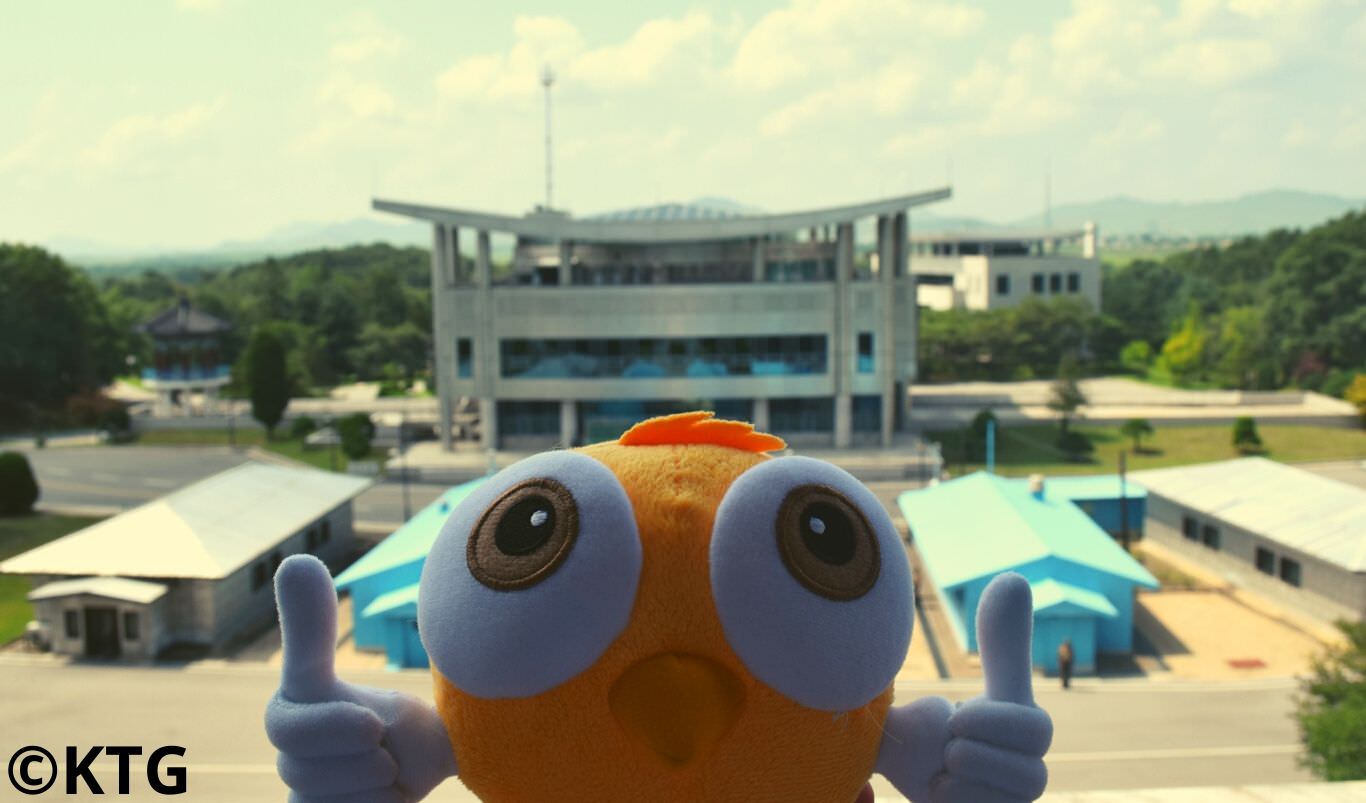 First Canary Bird at the DMZ?

Canary birds aside, and on a more serious note, animals that were about to be extinct, such as the Korean wild boar, many birds such as the black-faces spoonbill, have flourished these past decades at the DMZ. Some scientists even believe to have found traces of a Korean subspecies of the Siberian Tiger.