Pyongyang Hotels tend to offer better conditions that those outside the capital of North Korea but this should not defer you from exploring cities outside of the North Korean capital. Time spent in hotels tends to be limited as start the days early and only arrive back in the evenings.

Yanggakdo Hotel - located on an islet (Yanggak), this 47 storey hotel boasts great views of the capital of North Korea from its top floor rotating restaurant. Hotel rooms are spacious and have several international channels (including BBC) as well as of course local Korean TV channels. We tend to use this hotel for our group departures though this is sometimes combined with the Koryo Hotel. 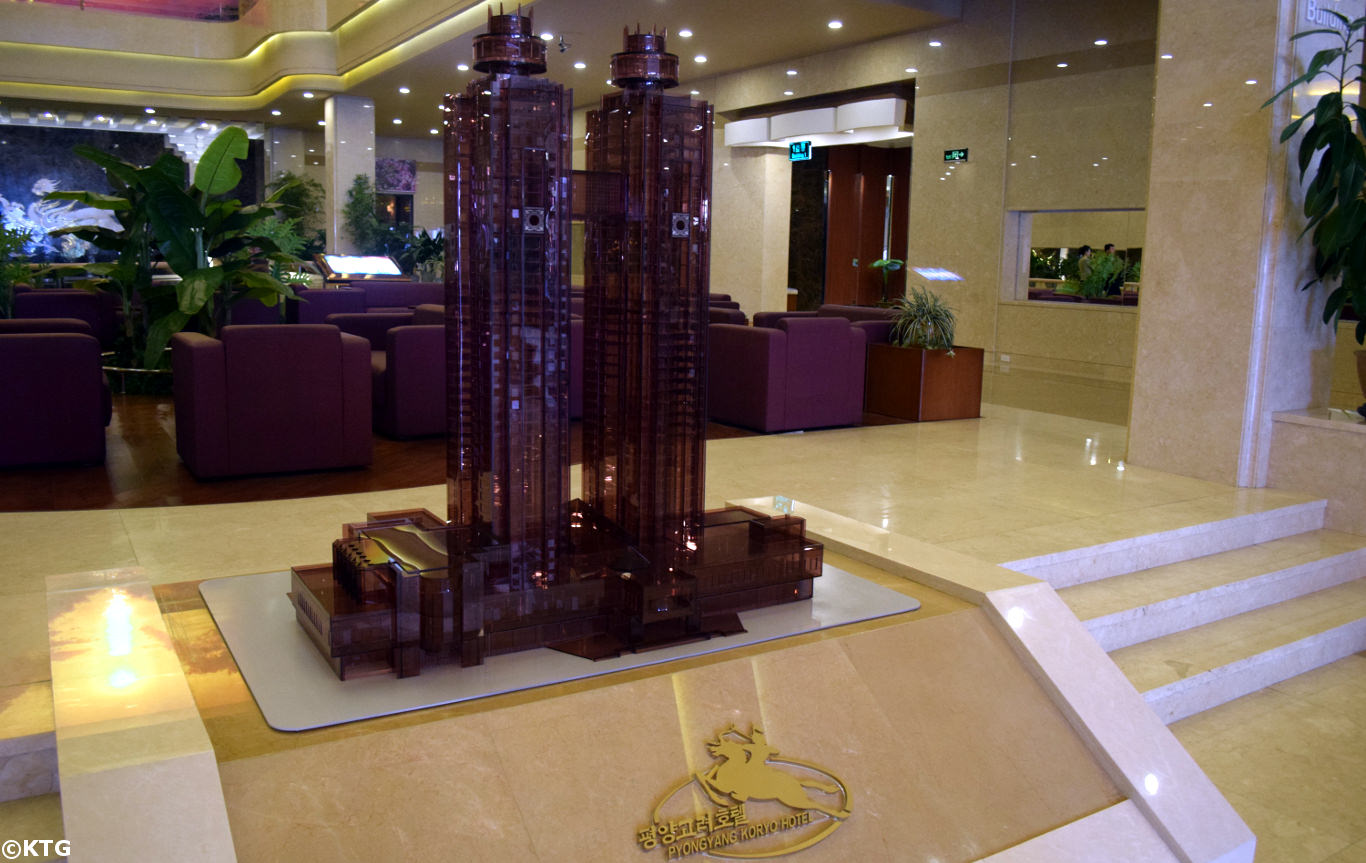 Considered one of the most luxurious Pyongyang hotels, it is situated in a quiet and relaxing location. This tends to be used for our North Korea exclusive private tours.

An icon of the capital, and probably one of the best known Pyongyang hotels, this gigantic superstructure looms over the North Korean capital. Recent investment from Orascom, the Egyptian company involved with the local mobile phone network, KoryoLink, has lead to the hotel being restored in recent years. It was only recently that the concrete building was covered by a glass casing. Although not open to the public just yet (as of 2020) we feel that this symbolic building deserves to have its own Ryugyong Hotel section! See how it has changed from being a concrete beast to a glass, LED lit beauty!

Just a cross from the Ryanggang Hotel, this hotel has been under reparation recently. Hot water is available in the morning and evening for a few hours. The staff members in the restaurant are very friendly and always curious at the site of a Western guest. The hotel has 30 stories and several bars, a swimming pool and sauna. You can see a main football pitch from the hotel which is used for training by Korean professionals. The hotel is also used to lodge sports teams. Together with the Ryanggang Hotel this is one of our favourite economy Pyongyang hotels.

30 storey, very retro hotel, located by the juncture of two main streets in Pyongyang; the Chongchun and Kwangbok Streets. Views of a huge mural of the country's Eternal President, Kim Il Sung and the Leader Kim Jong Il can be seen from across the street. The Youth Hotel has a fast food restaurant on its left which is not that common in DPRK.

Located by the Potong River in the sports district on the west side of Pyongyang, this 11 storey hotel is in a quiet location in Pyongyang. The top floor also has a rotating restaurant though views are not as impressive as those offered by the Yanggakdo and Koryo hotels. There are several bars in this place, which, if you are lucky, will give you the chance to mingle with North Koreans and Chinese people doing business in the DPRK and see their views on North Korea and the rest of the world.

Located right across from the Pyongyang Grand Theatre, this six storey building is mainly used by business people staying long periods of time in the DPRK. It's café is known for having the best coffee in Pyongyang. Views of the theatre and Taedong River on the other side of the hotel are other pluses of this hotel. 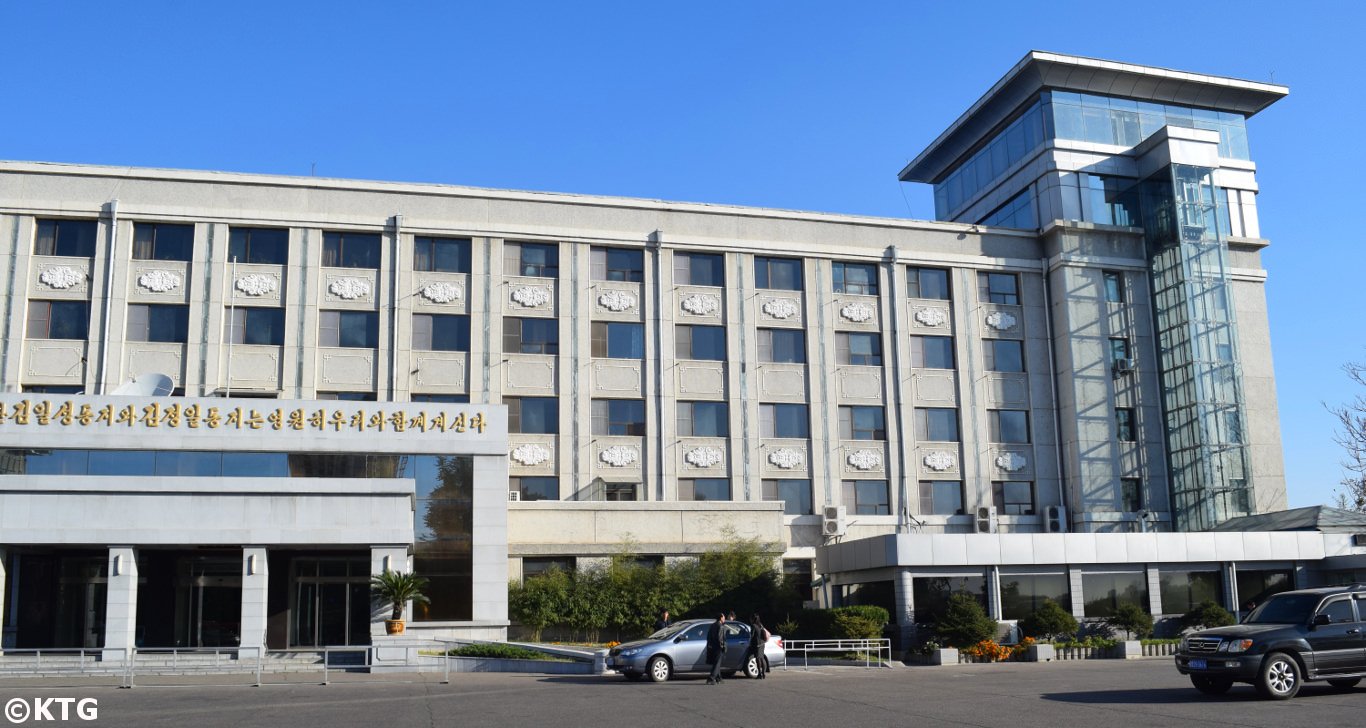 4 storey building, right next to the headquarters of the Rodong Sinmun newspaper. There are several bars here and a sauna. Rooms are not as spacious as the ones listed above. This hotel is mostly used by Chinese and North Koreans, so an interesting option for those who do not mind giving up the comforts supplied by the more sophisticated North Korea hotels in order engage with North Koreans. International calls can be made from the top floor.

Very centrally located, this hotel has close views of the Pyongyang Ice Rink. It is located close to the Air Koryo offices and the Ragkwon Department store. The hotel has 420 rooms and 18 floors.

Please go from our Pyongyang Hotels section to our North Korea Tourism page for information on our trips in North Korea.