The Pyongyang Hotel - Modest but with the Best Coffee in Town

Given its name, you would have thought that The Pyongyang Hotel is the most grandiose hotel in North Korea, an exclusive resort used to accommodate high profile delegations and diplomats. 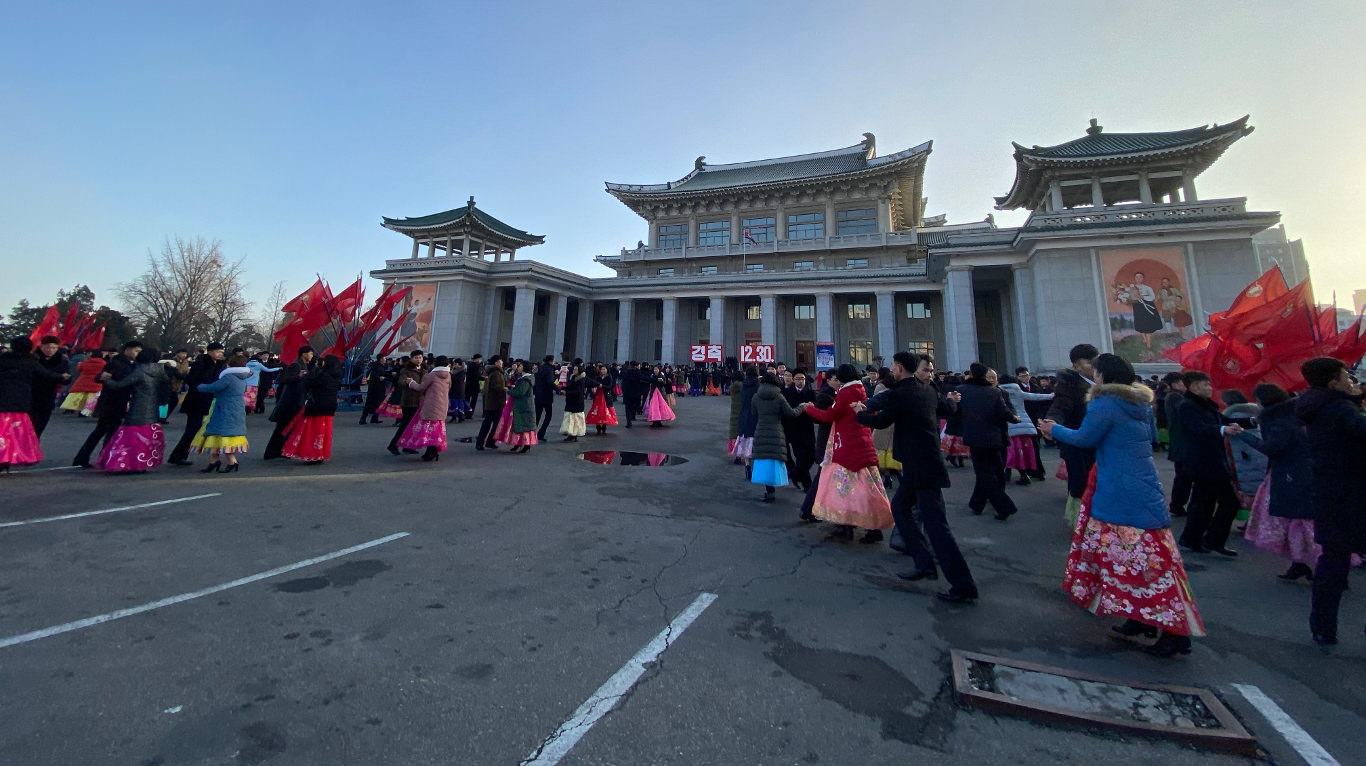 However, and despite its prime location, the Pyongyang Hotel is a second class hotel (third tier hotel in the DPRK rating system), used mainly to accommodate long-term guests consisting mostly of business people as is the case with many low budget hotels.

The Pyongyang Hotel is centrally located just across from the Pyongyang Grand Theatre and next to the Taedong River where Sungri Street (승리 거리 Victory Street) and Yonggwang Street (영광 거리 Glory Street) meet. Its location makes it an ideal place for those who would like to explore the centre of the North Korean capital by foot in the evenings. 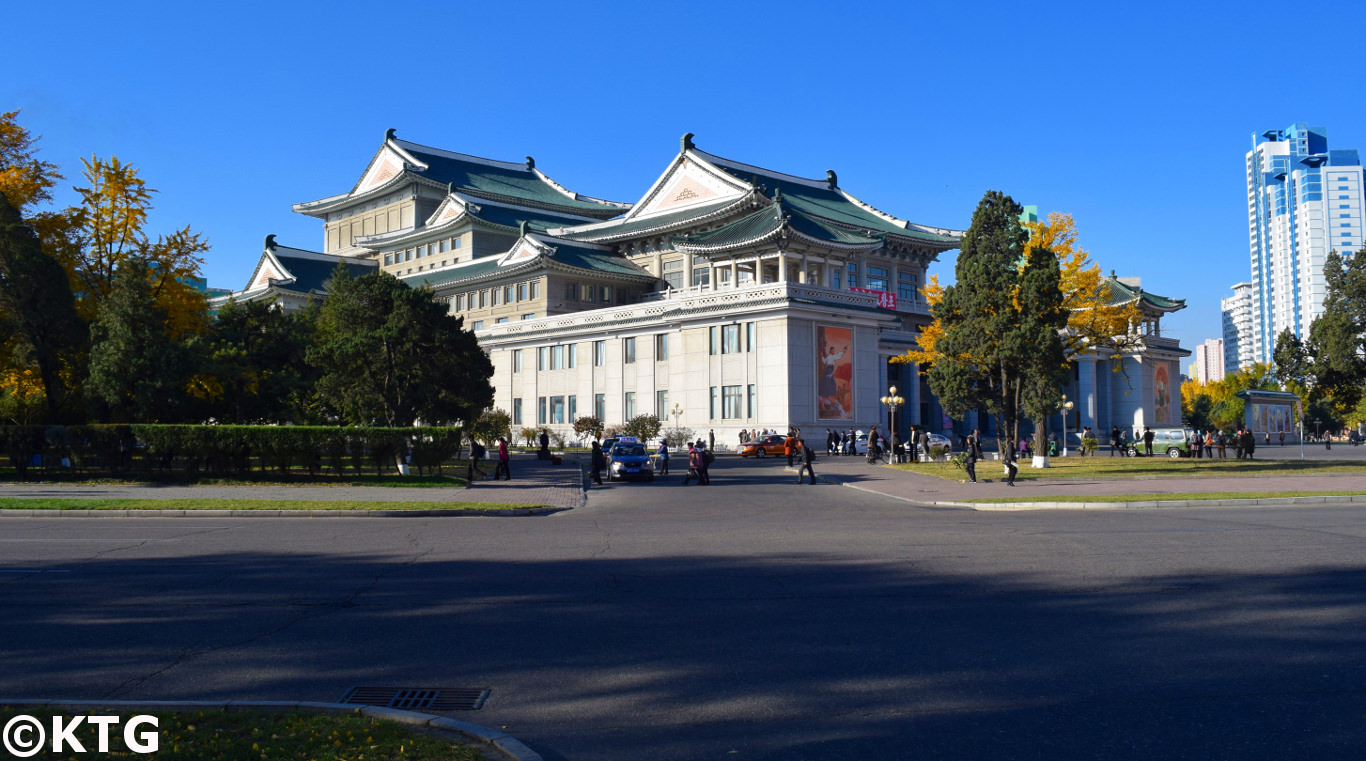 Yonggwang street leads directly to the Pyongyang Railway Station whereas Sungri Street leads to and goes through Kim Il Sung Square. In fact, if you have been with us to Korea you will have most likely passed by this inauspicious hotel, either by bus or when going on city walk from the Grand Theatre to Kim Il Sung Square.

As we walk from the Pyongyang Hotel to Kim Il Sung Square through Victory Street, we will pass another second class hotel, the Haebangsan Hotel which is located by the Rodong Shinmun (로동신문) headquarters. 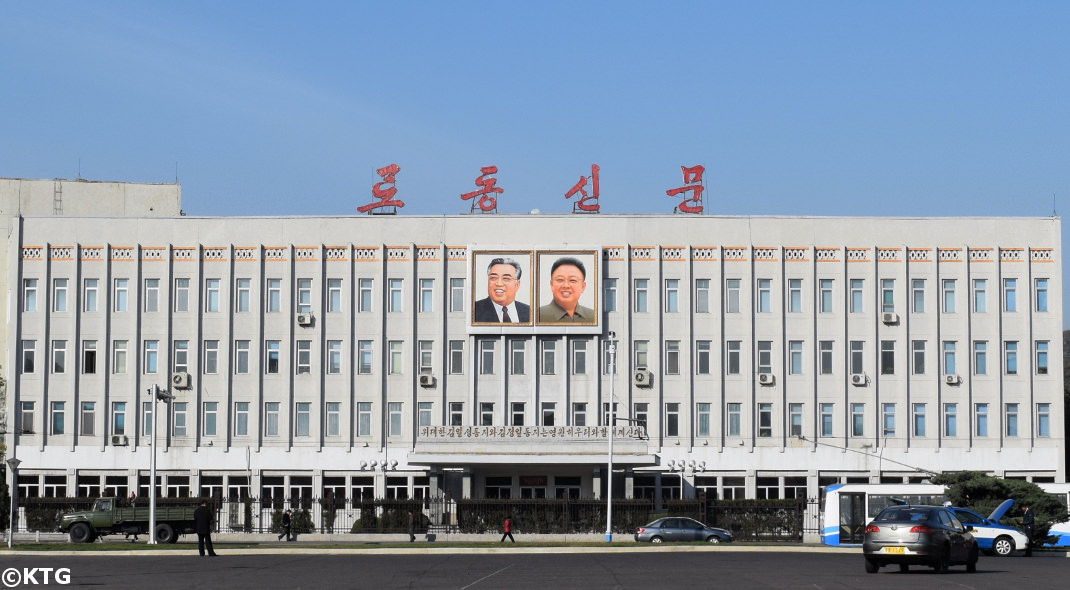 Headquarters of the Rodong Sinmun newspaper

Facilities in the Pyongyang hotel are very standard when compared to other second class hotels; several bars, restaurants, sauna, billiards room and no swimming pool.

Some of the best coffee in Pyongyang is served in the Pyongyang Hotel Café. You have to take the glass elevator, which has fantastic views of the Taedong River, in order to go to the sixth floor and appreciate an exquisite Macchiato while enjoying the views offered. 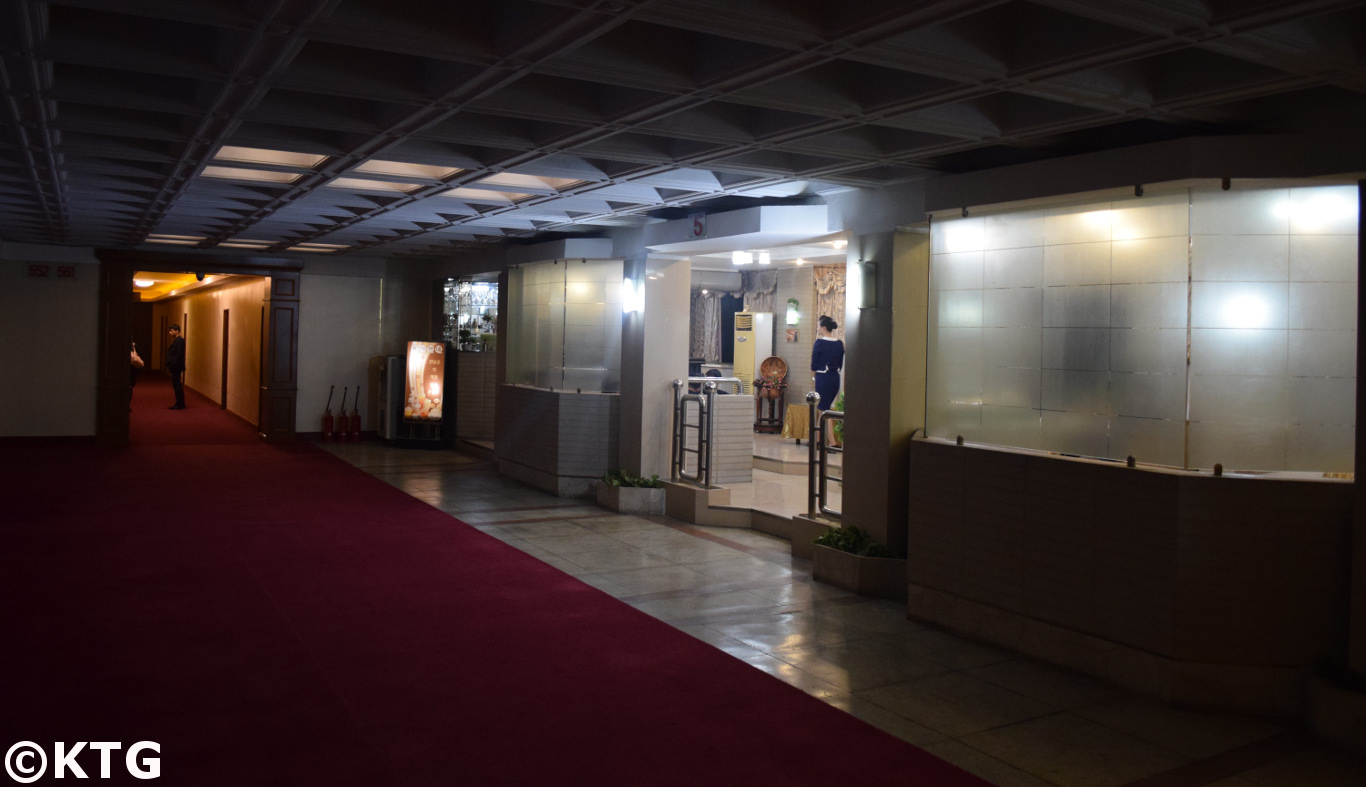 Coffee in North Korea is deemed a luxury product. Do expect to pay at least 3.5 Euros for a cup of coffee at a coffee shop when in Korea and up to 4 to 5 Euros at the Café of The Pyongyang Hotel (coffee served at breakfast is free of charge but it is instant coffee unlike say for example at the Koryo Hotel where they do serve freshly brewed coffee albeit charging 1.5 Euros per cup). Instant coffee in the DPRK on the other hand is usually sold at 10 RMB / 1.5 Euros per cup e.g. at restaurants and tourist spots. 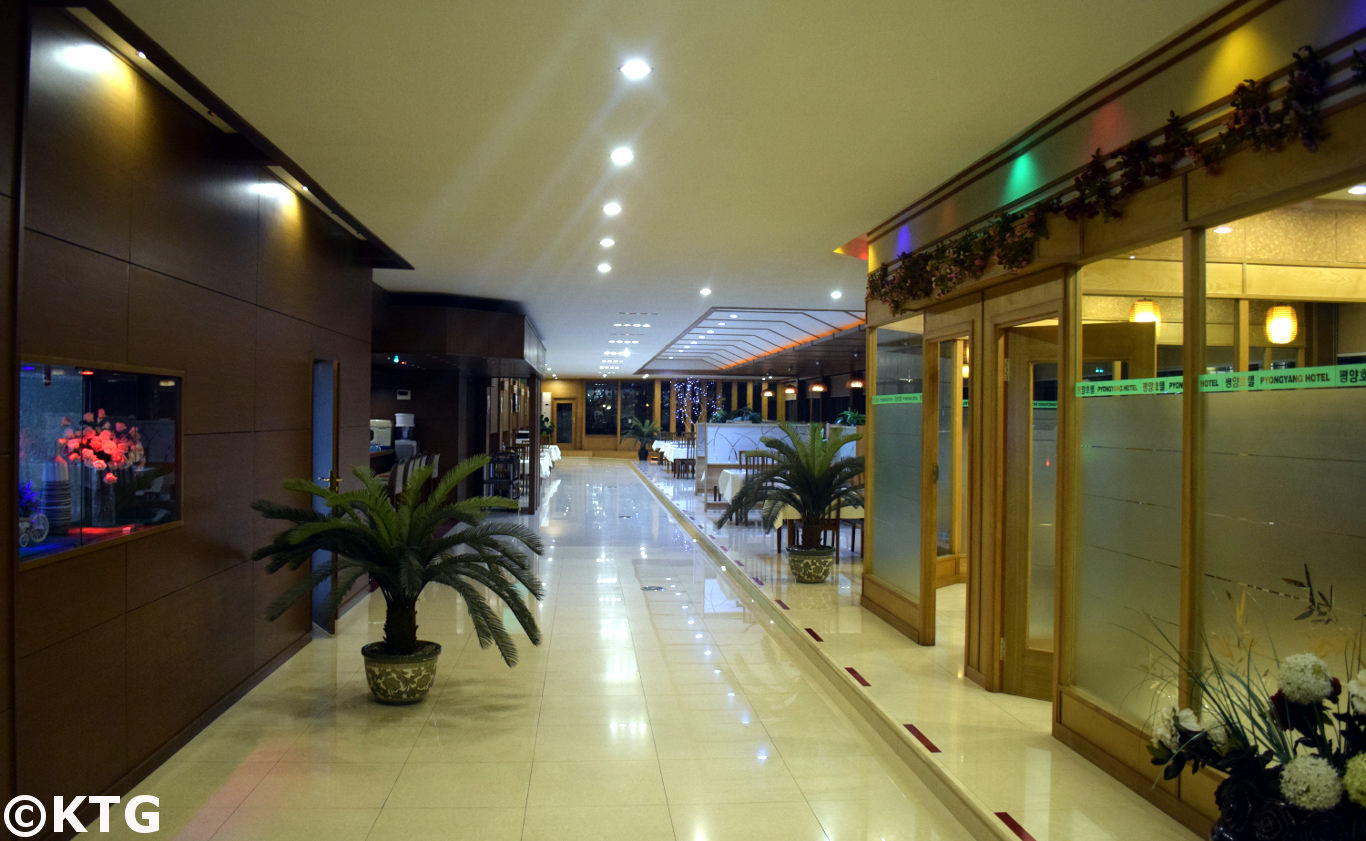 The souvenir and bookshop are on the second floor (please note that we use the terms used in DPRK, the ground floor there is the first floor). You can buy traditional Korean gifts here such as ginseng, chopsticks, Korean dolls, Korean fans and even Korean dresses (Choson ot). 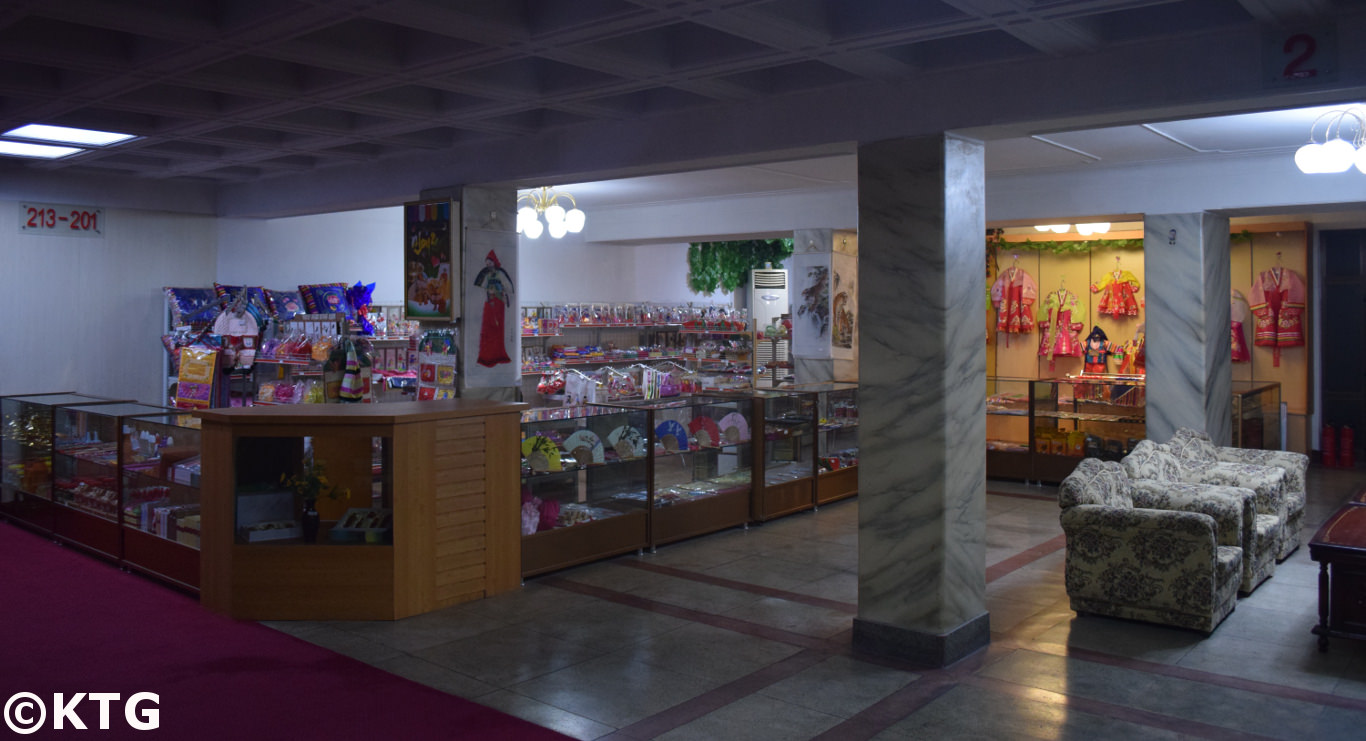 On the other side of the second floor they have the bookstore where, apart from selling DPRK books published in foreign languages, you can also purchase DVDs, maps of Korea and Pyongyang and postcards. Postcards can be sent from the hotel but bear in mind that they can take a while to reach their destination! 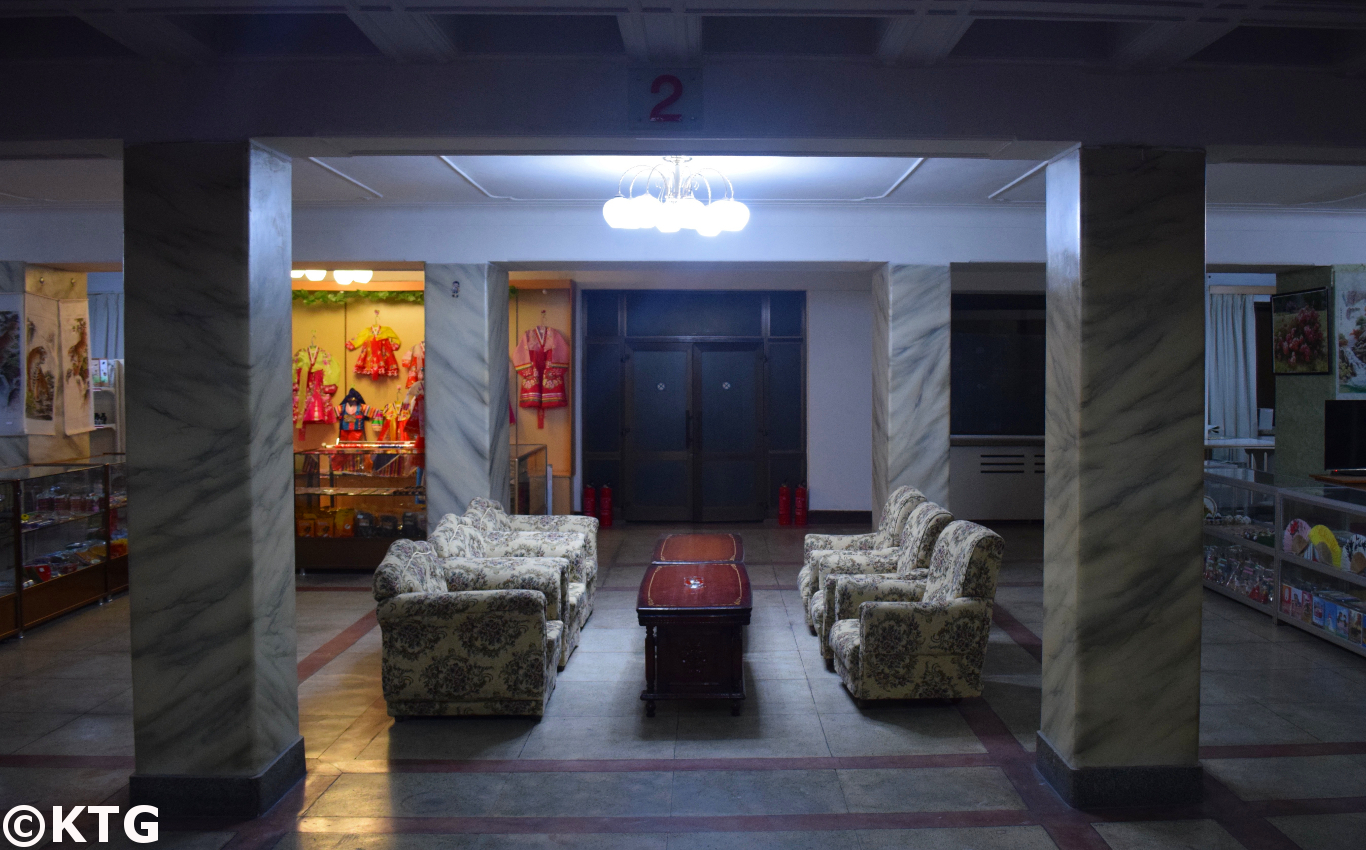 Retro sofas between the souvenir shop and the bookstore

The first floor (meaning ground floor) has a shop where you can purchase clothes, including suits, and shoes, always handy if you plan to go to the Kumsusan Palace of the Sun and were unable to bring any formal clothes with you. They also sell cosmetics and snacks. Remember that hotels in Korea usually do not provide guests with bottled water in their rooms. 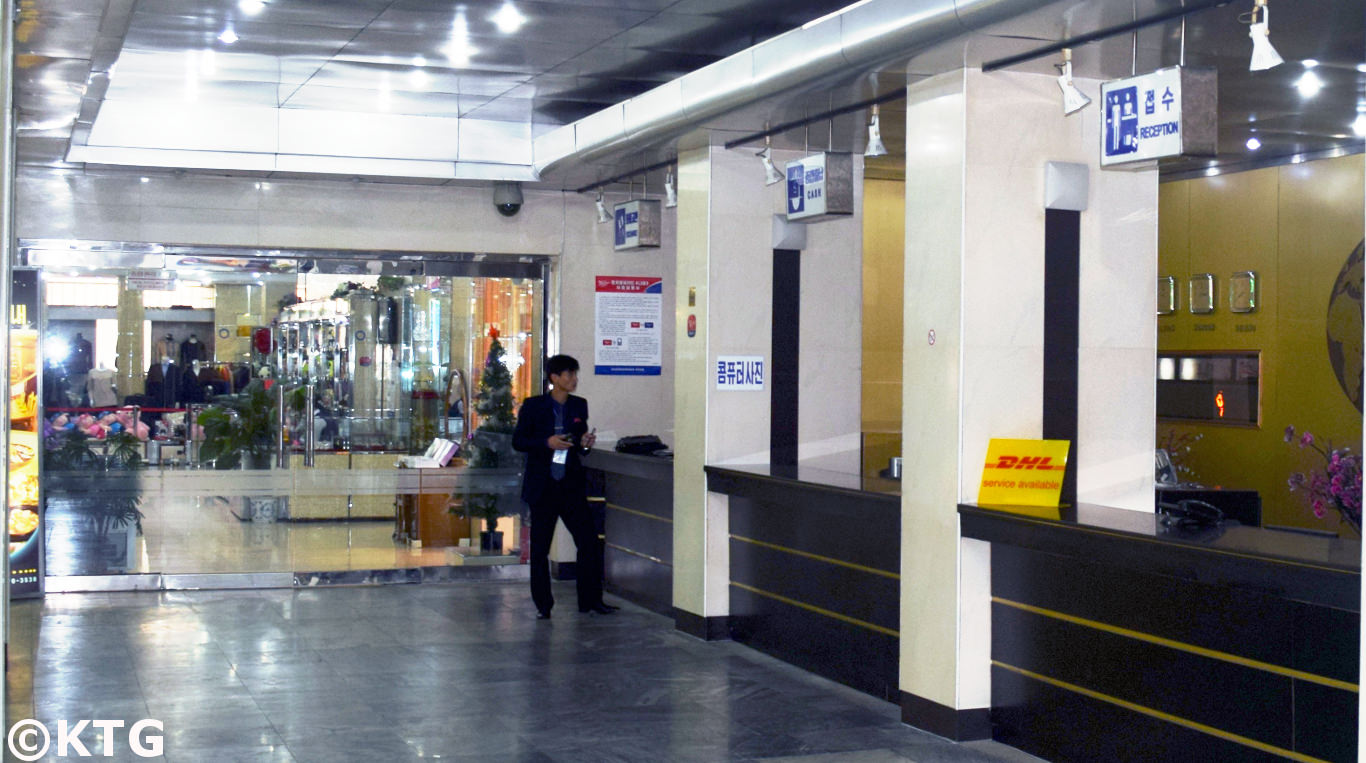 The third floor has a tailor shop but do check well in advance if opened and have anything ordered a few days before your departure date.

If you have energy left after a long days travel, you may want to have a game of table tennis or billiards at the 4th floor. The staff here, as is the case in all hotels in DPRK, are very friendly and may be up to a challenge!

If, on the other hand, you prefer to just relax you can always go to the beauty salon or barbers on the first floor followed by a massage on the second floor. 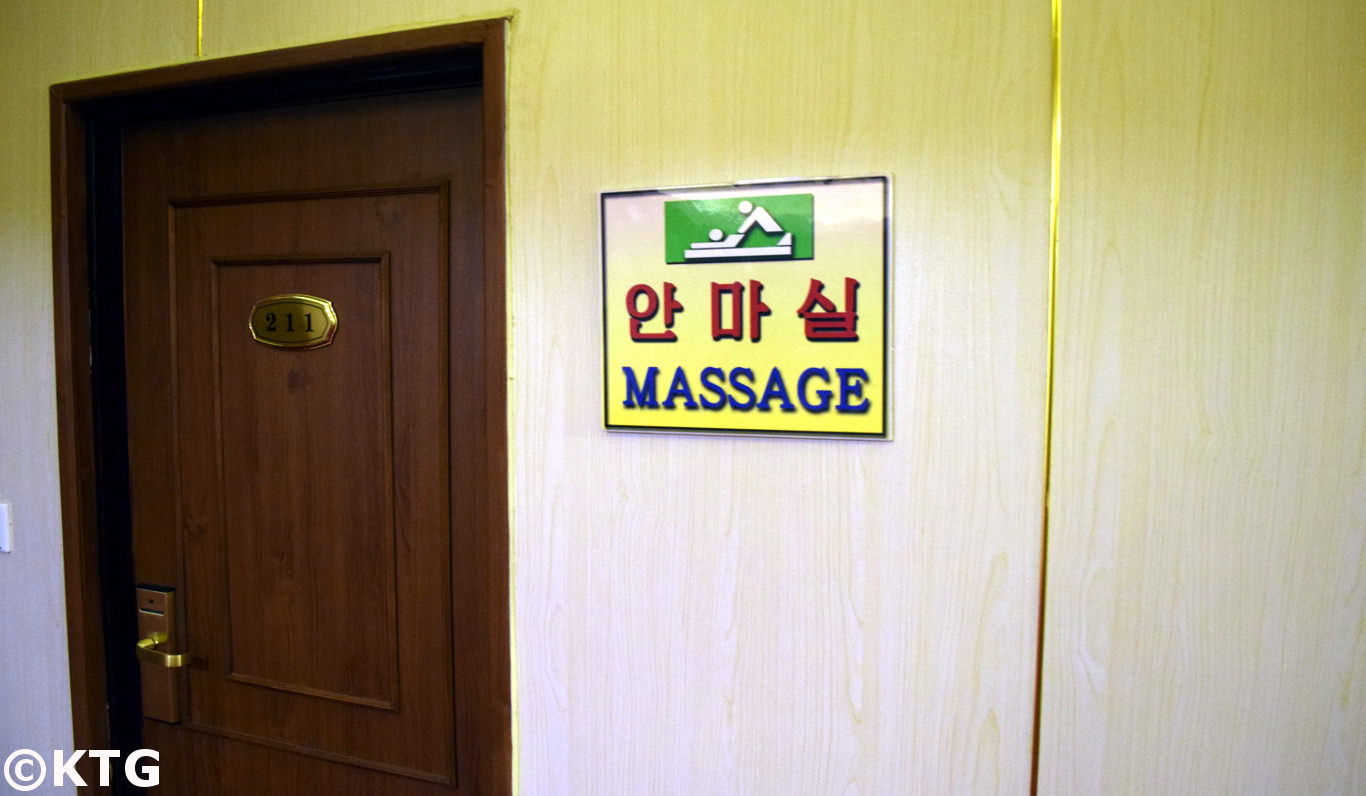 In the case of feeling brave, then why not head to the karaoke room on the second floor? As you may know Koreans take their singing very seriously and most of them sound very professional!

For a quiet drink we recommend going to the restaurant on the 6th floor because of the views, but you can also go to the bar on the 5th floor.

There are several restaurants at the Pyongyang Hotel, the one on the top floor having views of the river. Breakfast is served at the restaurant on the ground floor. 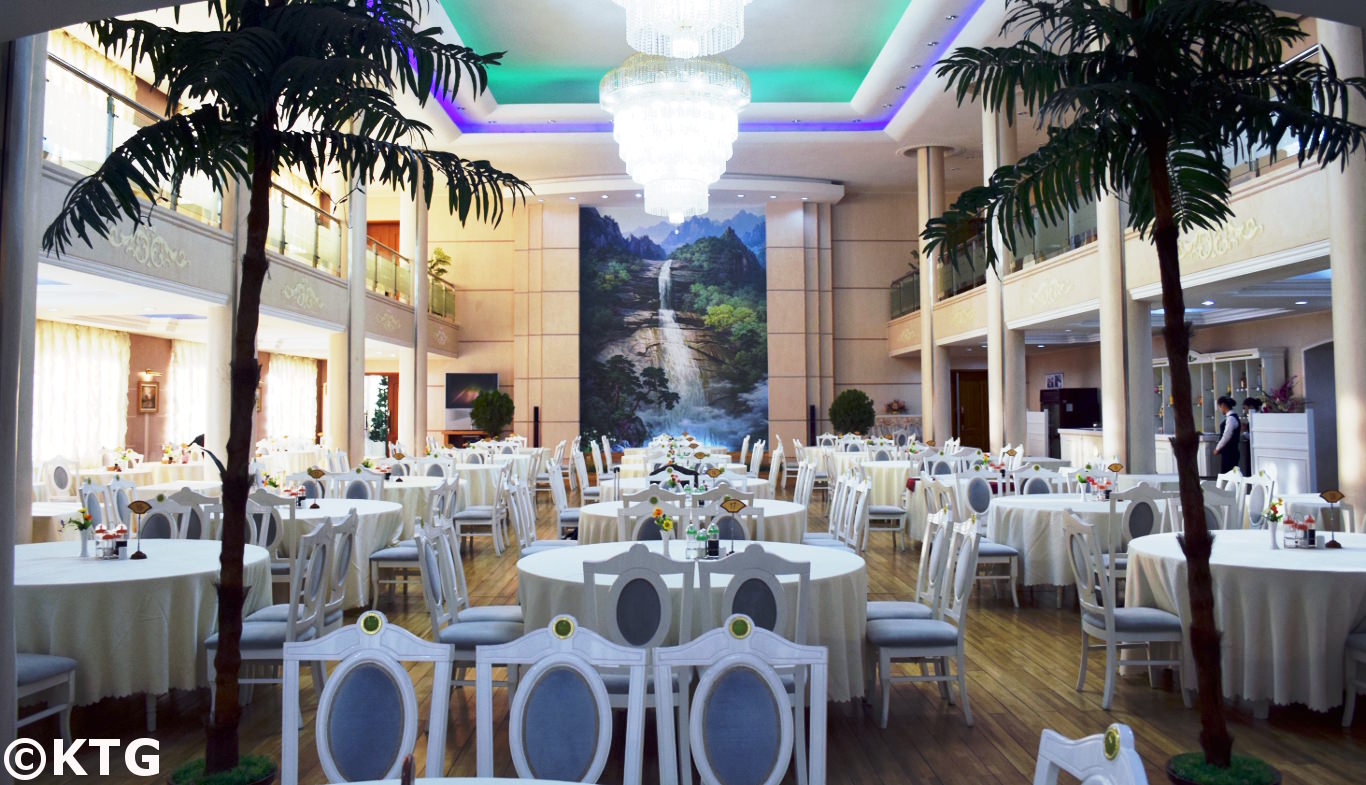 This is where breakfast is served. Breakfast is a set menu, not a buffet styled one

Perhaps the most interesting restaurant is however, as they describe it, the "Open-air restaurant for sea shell baking". 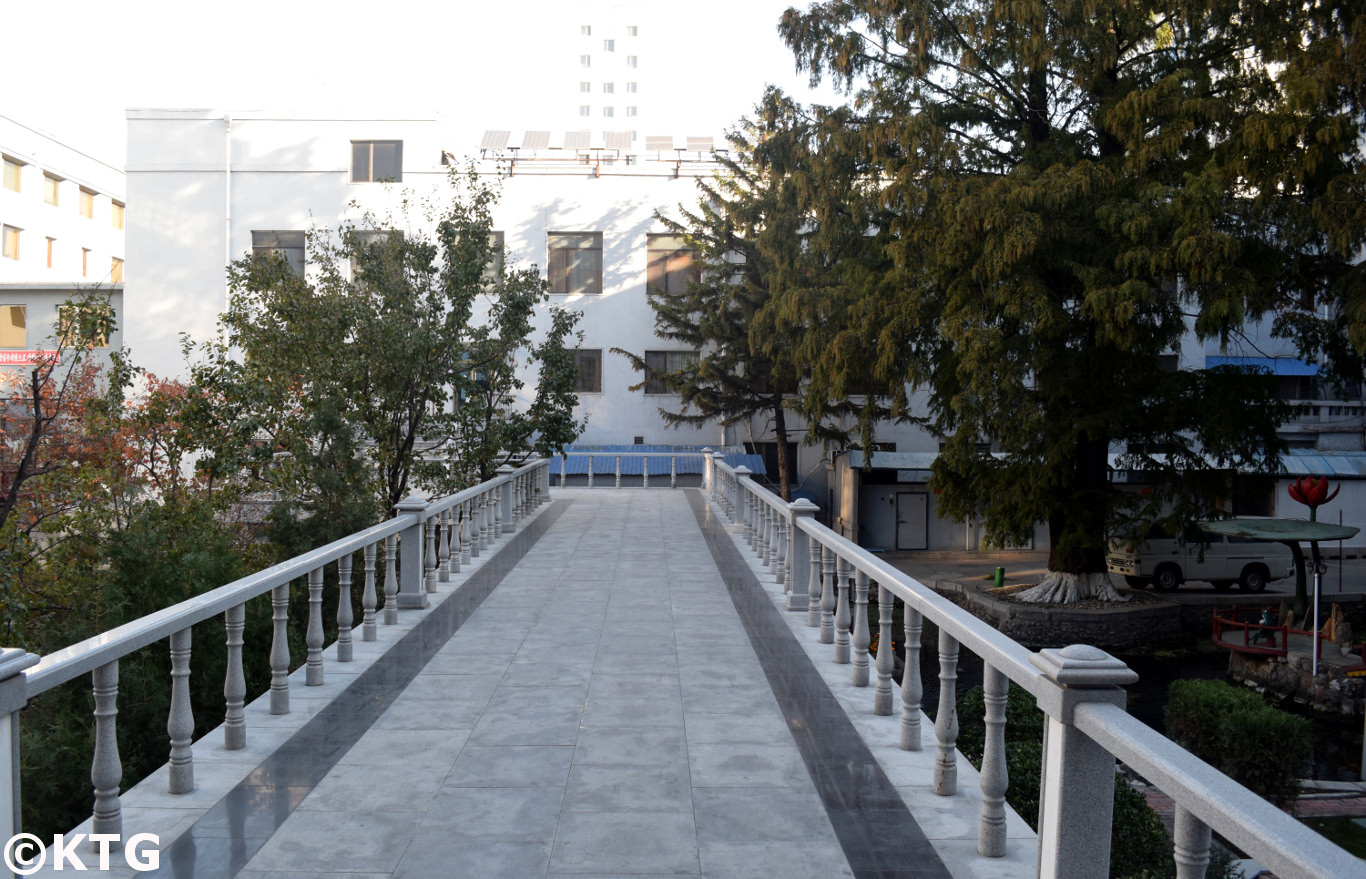 The "Open-air restaurant for sea shell baking." We didn't spot any seashell baking that day but it does indeed sound like a treat

DHL actually operates in North Korea and they have a desk by the reception in the Pyongyang Hotel.

Being a second class hotel, the rooms are very basic. Hot water is provided in the mornings and evening which is when guests tend to be in. There is a deluxe class room which offers guests with an office room but if you are looking for luxury we recommend you to stay at the Yanggakdo, Koryo or Pothongang Hotel. 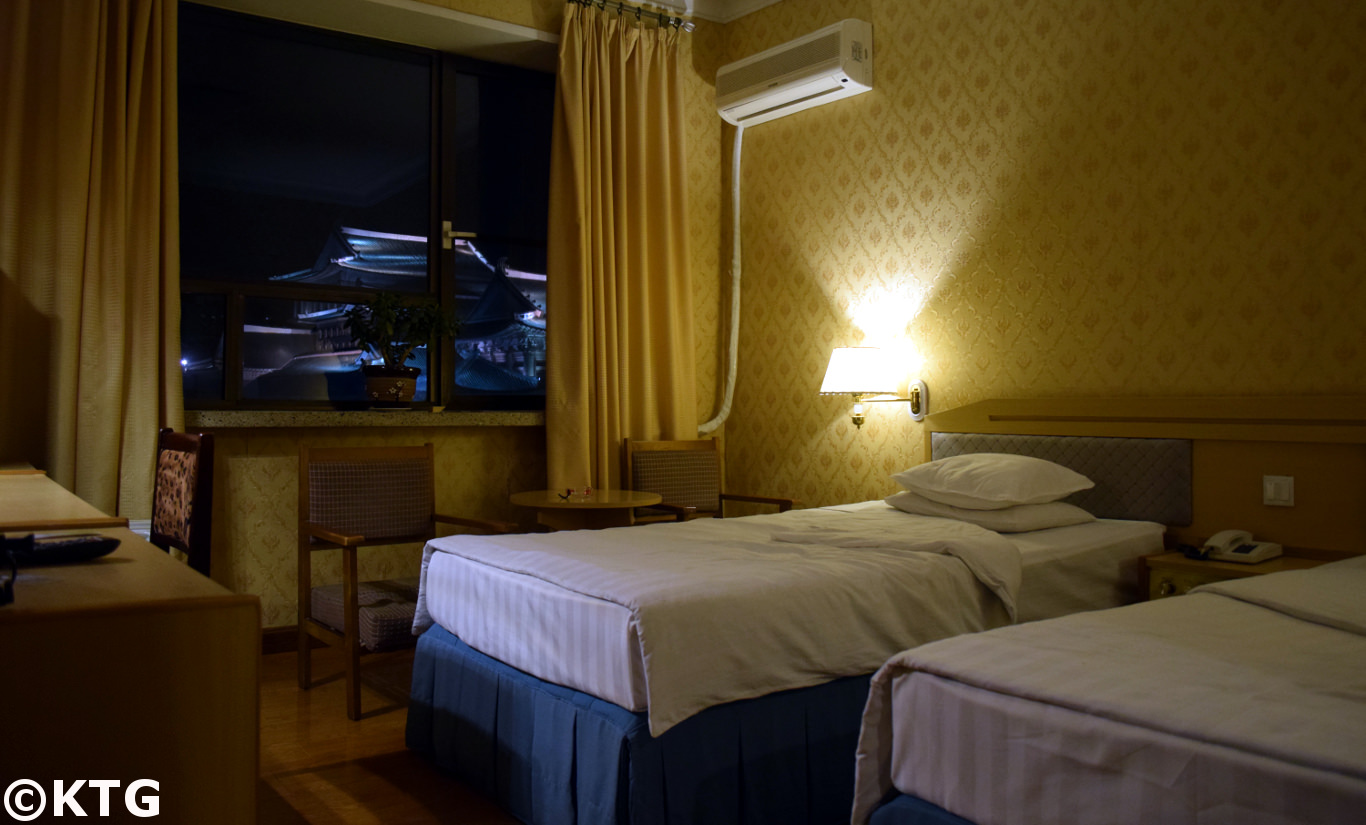 Rooms are basic but with great views of the city centre. They have international channels.

Check the hotel guide map on the ground floor. It will help you navigate through endless corridors and explore all the facilities available in the hotel. 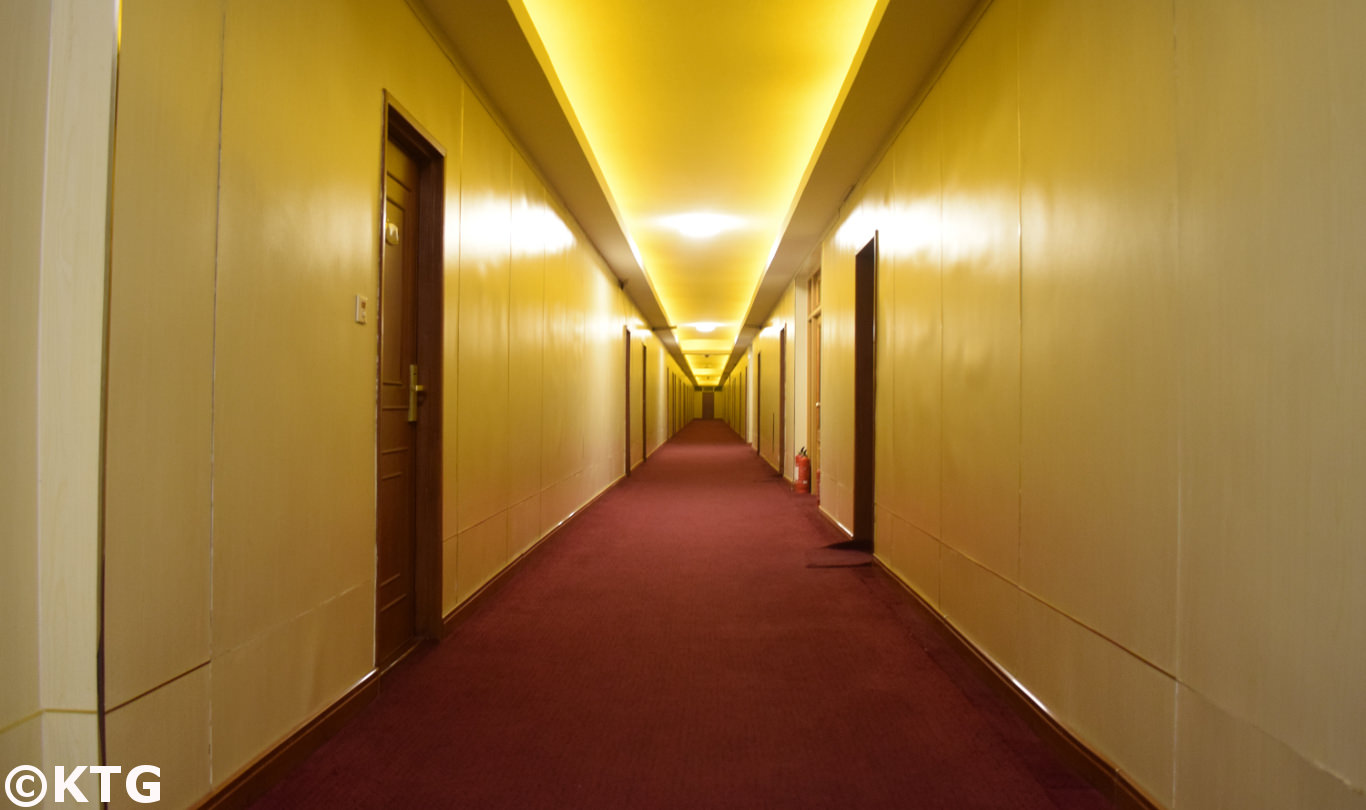 Need a hand getting around? 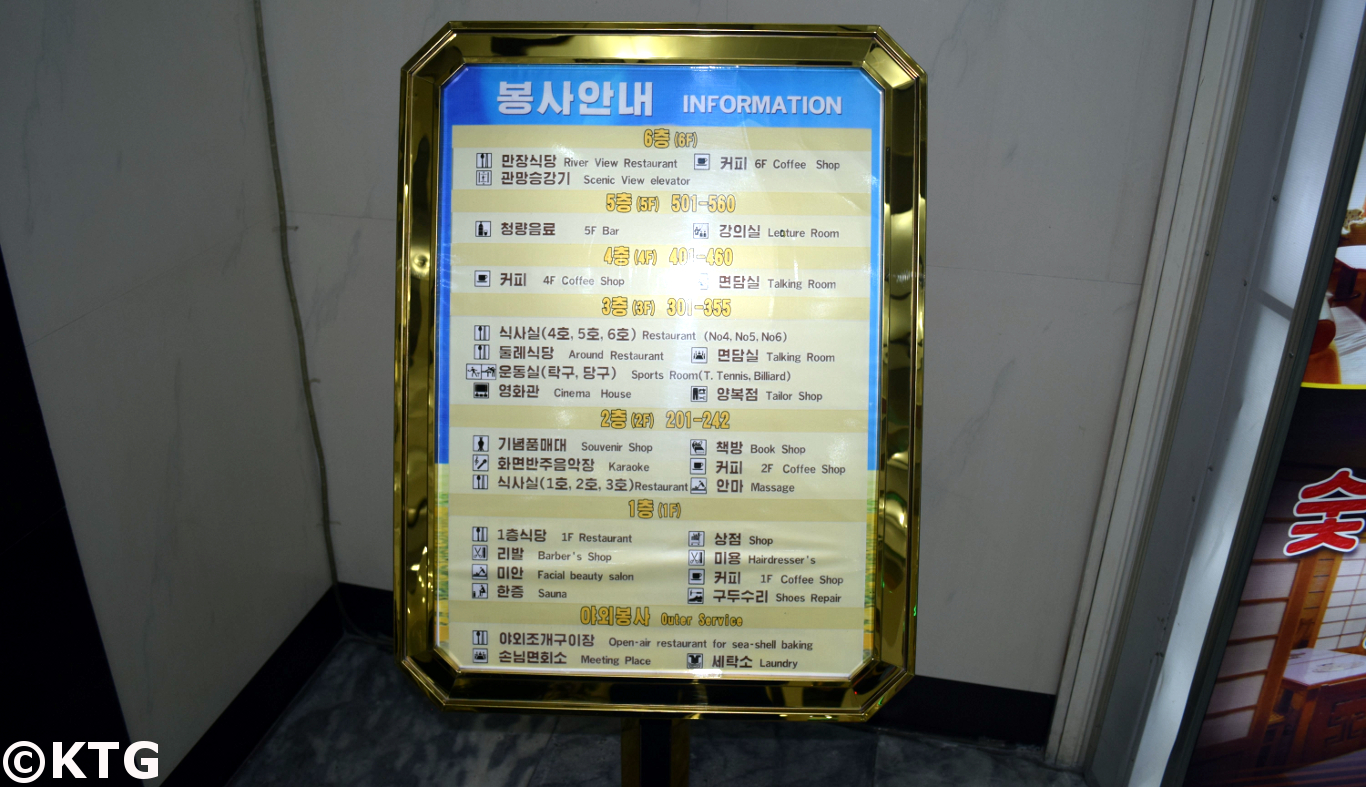 If you would like to bump into Chinese people doing business in the DPRK or even into Japanese Korean citizens, stay away from other western travellers, enjoy some of the best coffee in Pyongyang but are not too concerned about luxury, then the Pyongyang Hotel may be an option to consider.