Ever seen the Ryugyong Hotel? As you arrive in Pyongyang, you will notice a giant glass pyramid that dwarfs anything anywhere close to it. How did the largest empty building and LED screen in the world come to be? How did it end up in Pyongyang? And how has it changed throughout the years?

Check out the dramatic changes it has gone through our own eyes and pictures taken over the years.

What is the Ryugyong Hotel?

The Ryugyong Hotel is seen by many as the most iconic building in Pyongyang and it currently holds the World Guinness record for the tallest unoccupied building. Despite not being furbished or opened to the public, we simply felt that we could not leave this one out of our list of Hotels in North Korea! 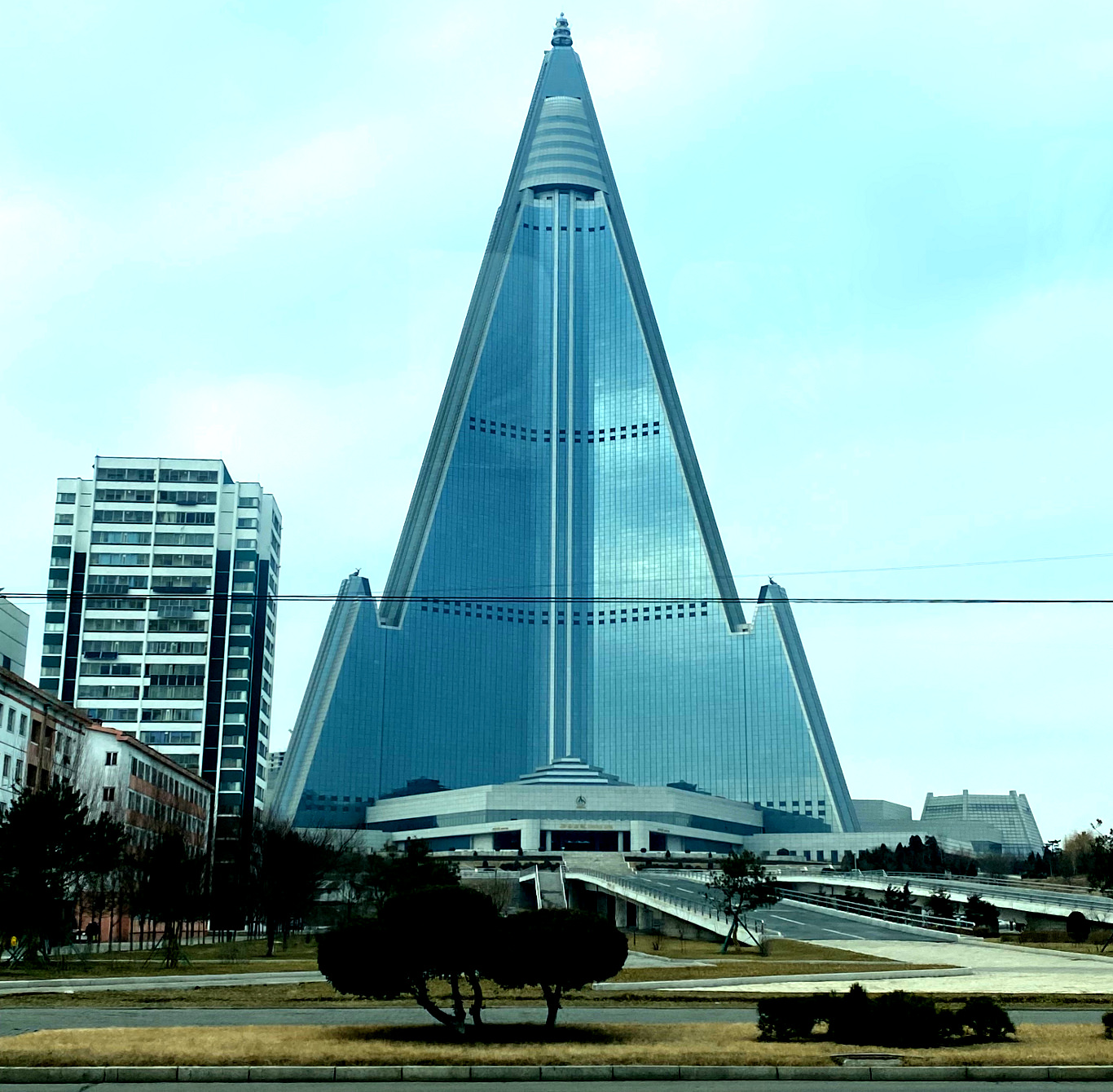 Interesting: It would have been the tallest hotel in the world had it been finished by its initial completion date. No new hotel taller than it was built until 2009, with the construction of the Rose Tower in Dubai, UAE.

Looming over the North Korean capital and visible from miles away, this 330 metre (1,083 feet) is a site of its own. Giant glass structure in the day time, massive LED screen at night, catching a close up look of this construction is simply breathtaking! Seeing it from far away... well, it takes your breath away! But the giant pyramid wasnâ€™t always this beautiful... 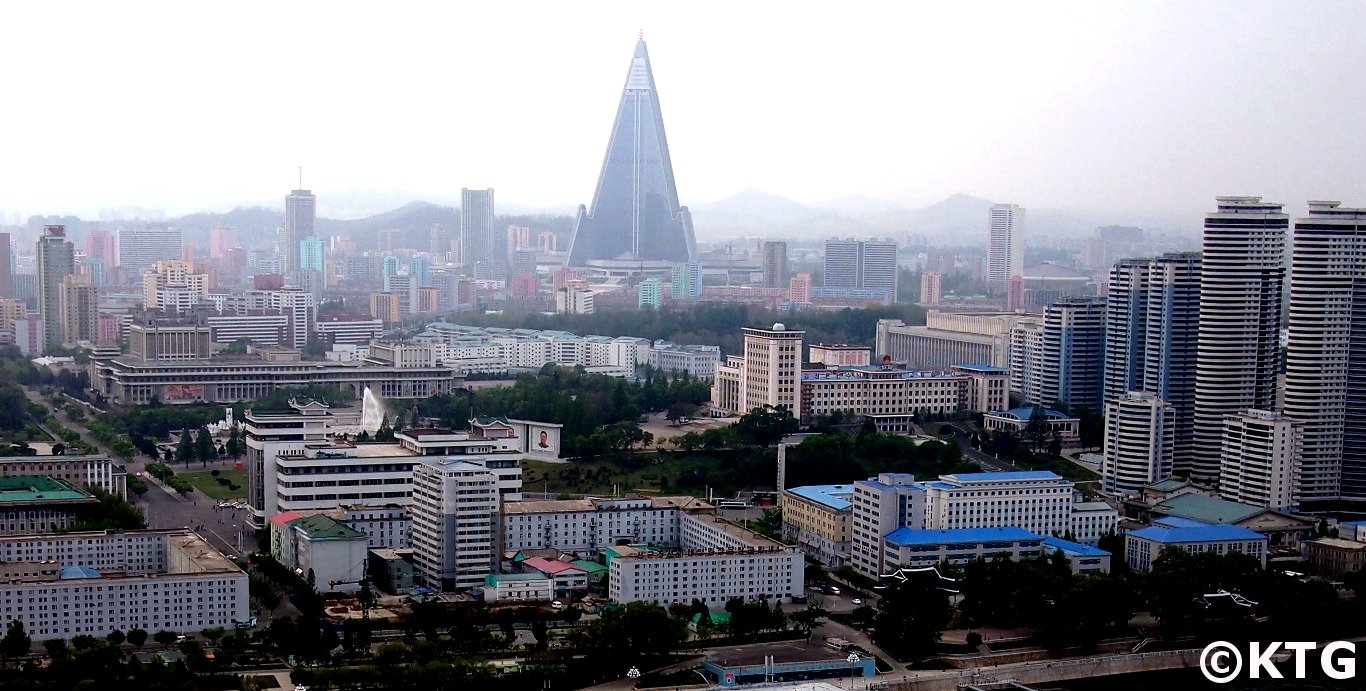 This massive pyramid has no less than 105 storeys a fact that makes it one of the buildings with most floors in the world. It is also known as "105 Building" and the "Capital of Willows." A seemingly endless structure, the futuristic like / sci-fi architecture of the Ryugyong is a stark contrast to that of any other building not only in Pyongyang but also in the rest of North Korea.

Brief History of the Ryugyong Hotel

The Ryugyong Hotel started being built in 1987 and would have been the world's tallest hotel had it been finished by its initial finish date in 1992 for the 80th Birthday of President Kim Il Sung. It was to be the largest building in the world! An ambitious project which aimed at catering for tourists and investors. 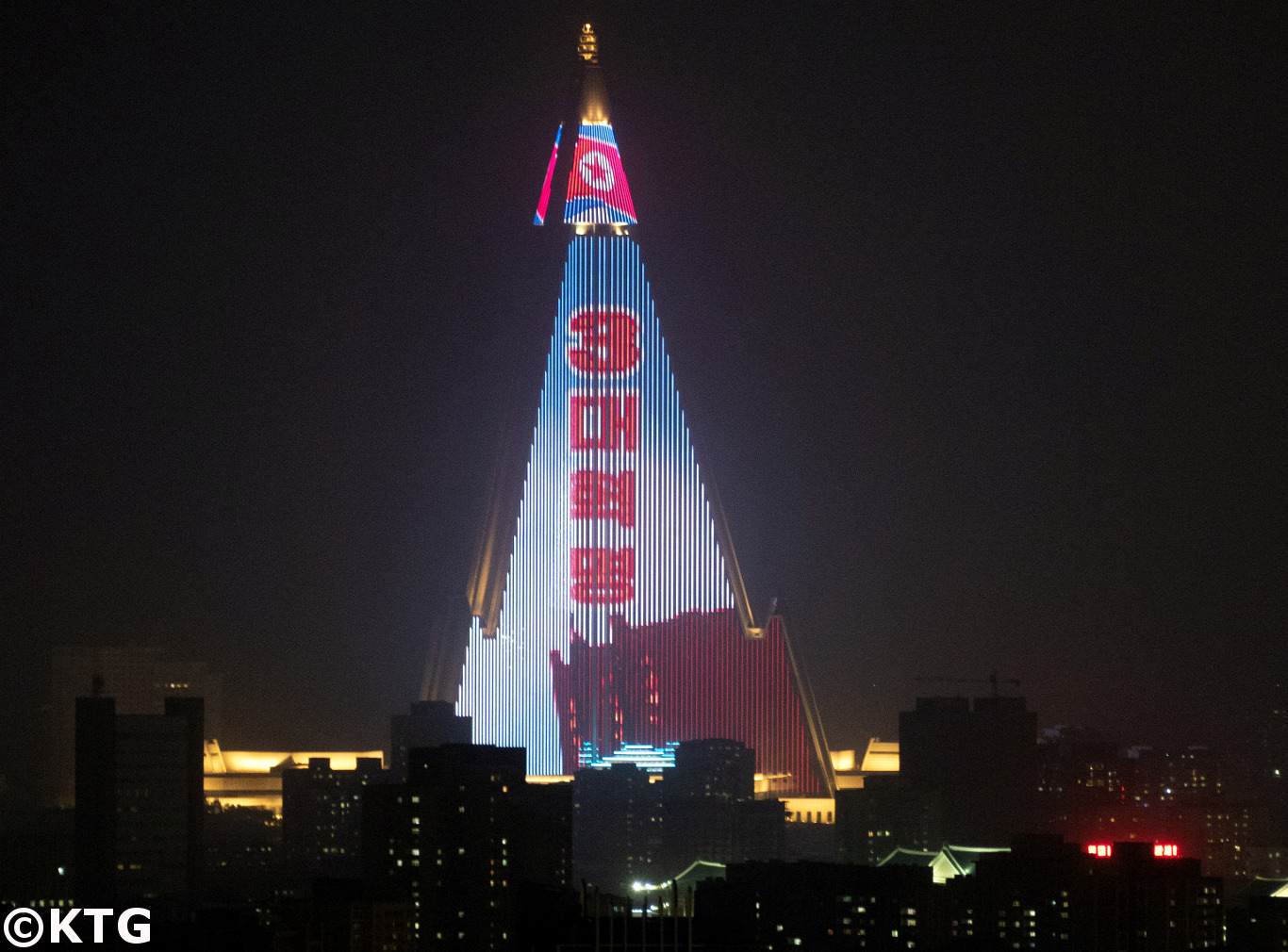 It wasn't always bling-bling - the Ryugyong Hotel in 2019

The building reached its final construction height by 1992. However, as the Soviet Union and its satellites collapsed, the DPRK was faced with more urgent matters and funding for the project stalled. In addition, a series of natural disasters meant that the 1990s was one of the harshest times in North Korea. This period is known there as the "Arduos March".

So there it stood, a lonely concrete shell in the middle of Pyongyang with an old crane on top. Several western media outlets did not take long to dub it as the "Hotel of Doom", "Ghost Hotel", call it the worst building in the world and use other "flattering terms" as many of them, not all, tend to do when reporting about the DPRK.

And then in 2008 the Egyptian (well who else has so much experience with pyramids?) telecom giant, Orascom, came into scene.

Apparently the agreement was that Orascom was to invest in the DPRK mobile phone network, Koryolink, and, as part of the deal, was to finish up the Ryugyong Hotel.

The building will be partly used as a base for Orascom in North Korea, while the rest will be used as hotel and apartments. The Ryugyong will have too several revolving restaurants which will undoubtedly offer the best views of Pyongyang, apart, of course, from the fact that the hotel itself will not be in the landscape! In 2008 the new deadline was set for 2012, a key date in DPRK as it was the 100th Birthday of President Kim Il Sung.

At KTG have been lucky enough to see the hotel changing since construction took place again in 2008 (coincidentally the year we started arranging trips to DPRK) and we have first handedly witnessed how the hotel has changed from a concrete "ghost" to the beauty that it is today. 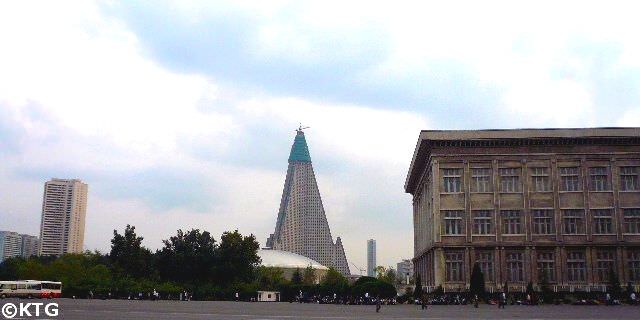 All Concrete - The Ryugyong Hotel in September 2008. This was taken just when the hotel was to start to undergo restoration.

In 2008 the hotel was completely covered in concrete. We could sometimes see some lights coming from the interior of the hotel at night. Our shock would come in our tours the following year where there was some visible change in the hotel's appearance.

Obvious change started to become visible in 2009 when several sides of the Ryugyong Hotel had glass and the top section of the hotel had been reformed. 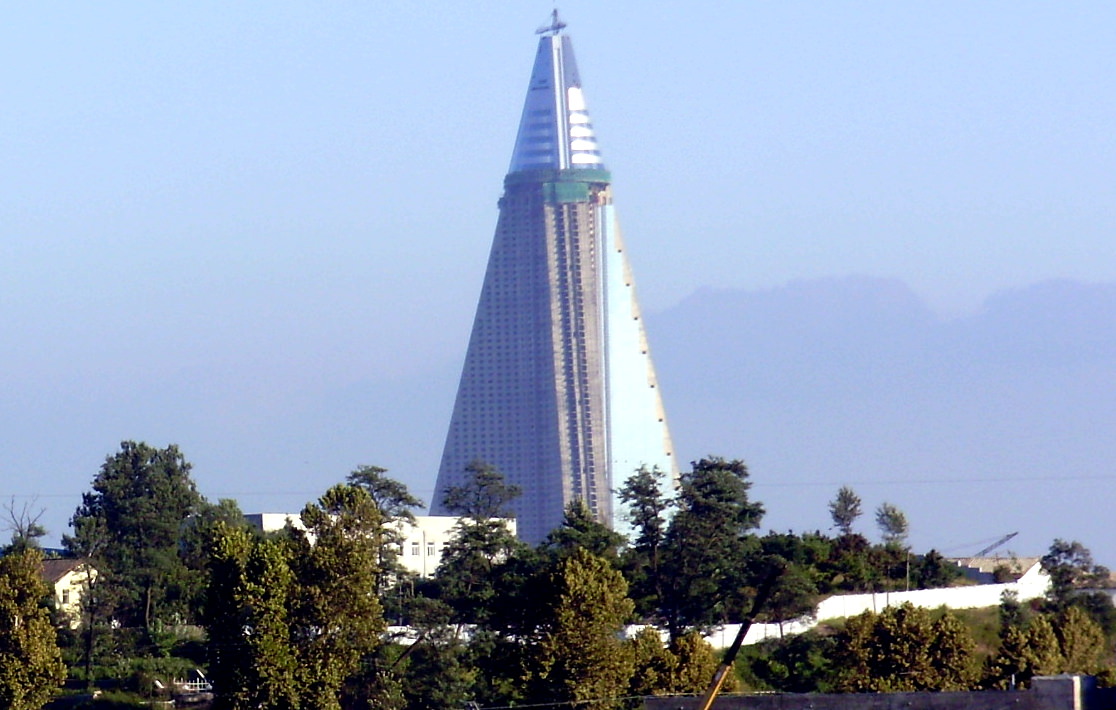 Picture taken on one of our tours in 2009. The first signs of renovation are visible. 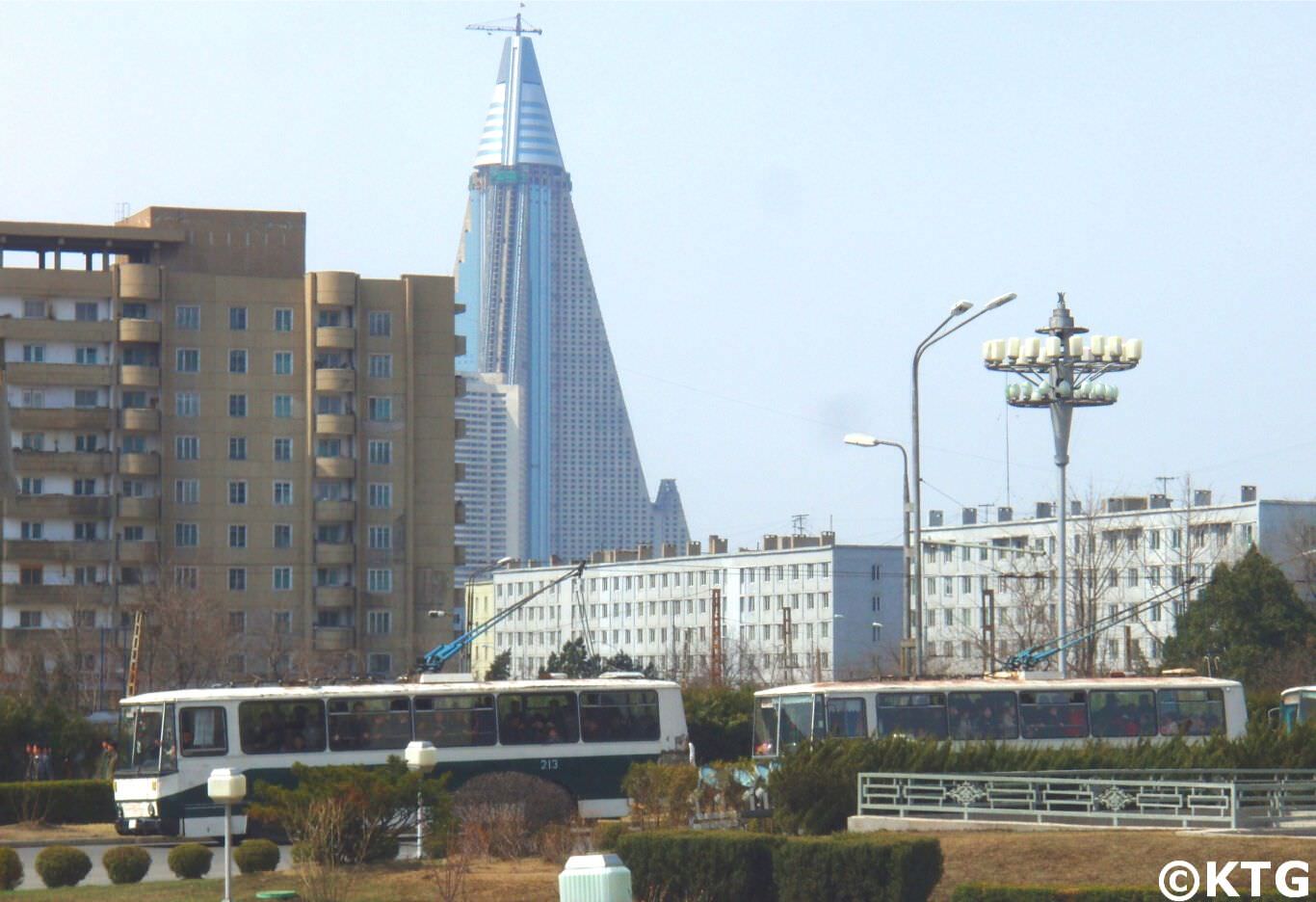 This picture was taken on one of our 2010 tours in April. Progress was steady. 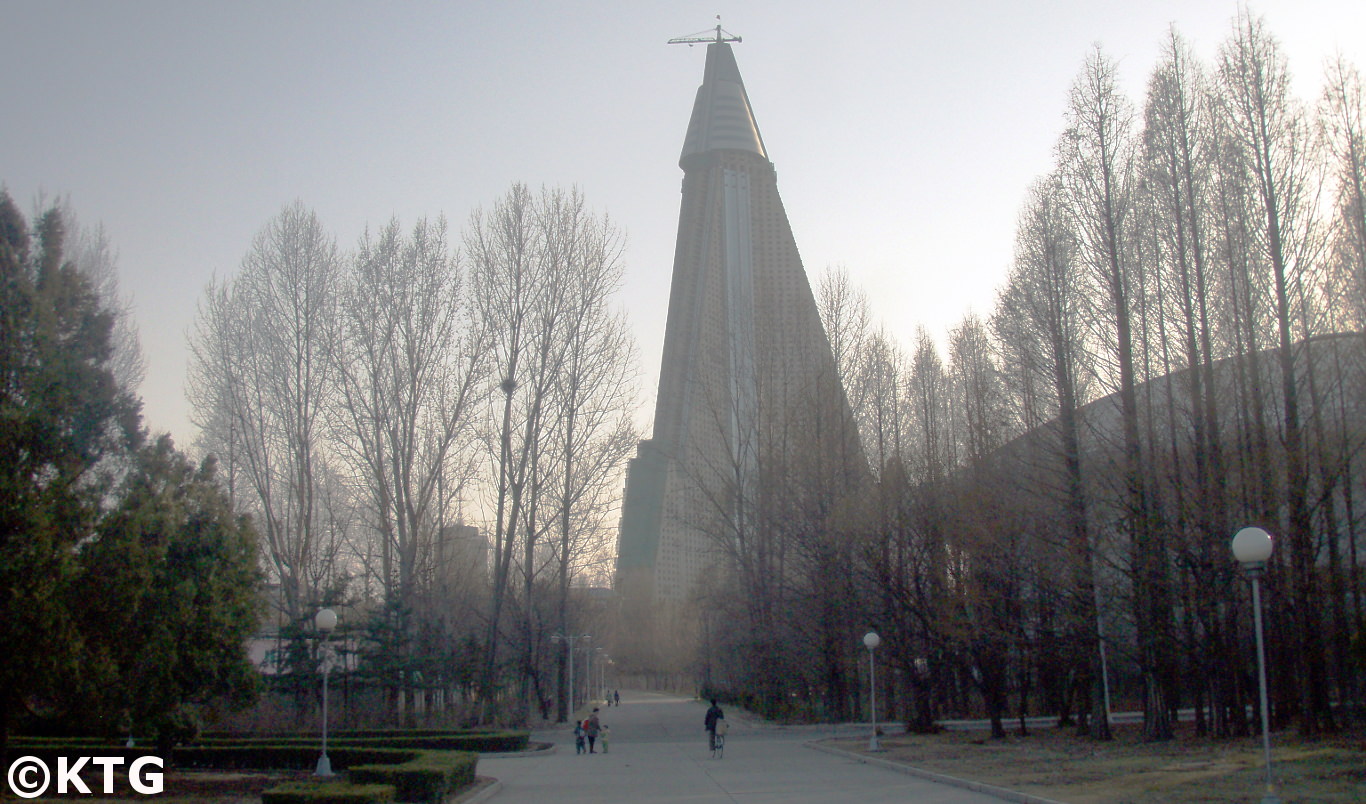 Close up picture of the Ryugyong Hotel taken in 2010.

We had been initially told that the hotel would be opened to the public by 2012. However, we then told that the opening date was postponed to 2013. This was then changed and there currently is no completion deadline for the project. Regardless, by 2012 the hotel was completely different story to what it once was and stood proudly shining. 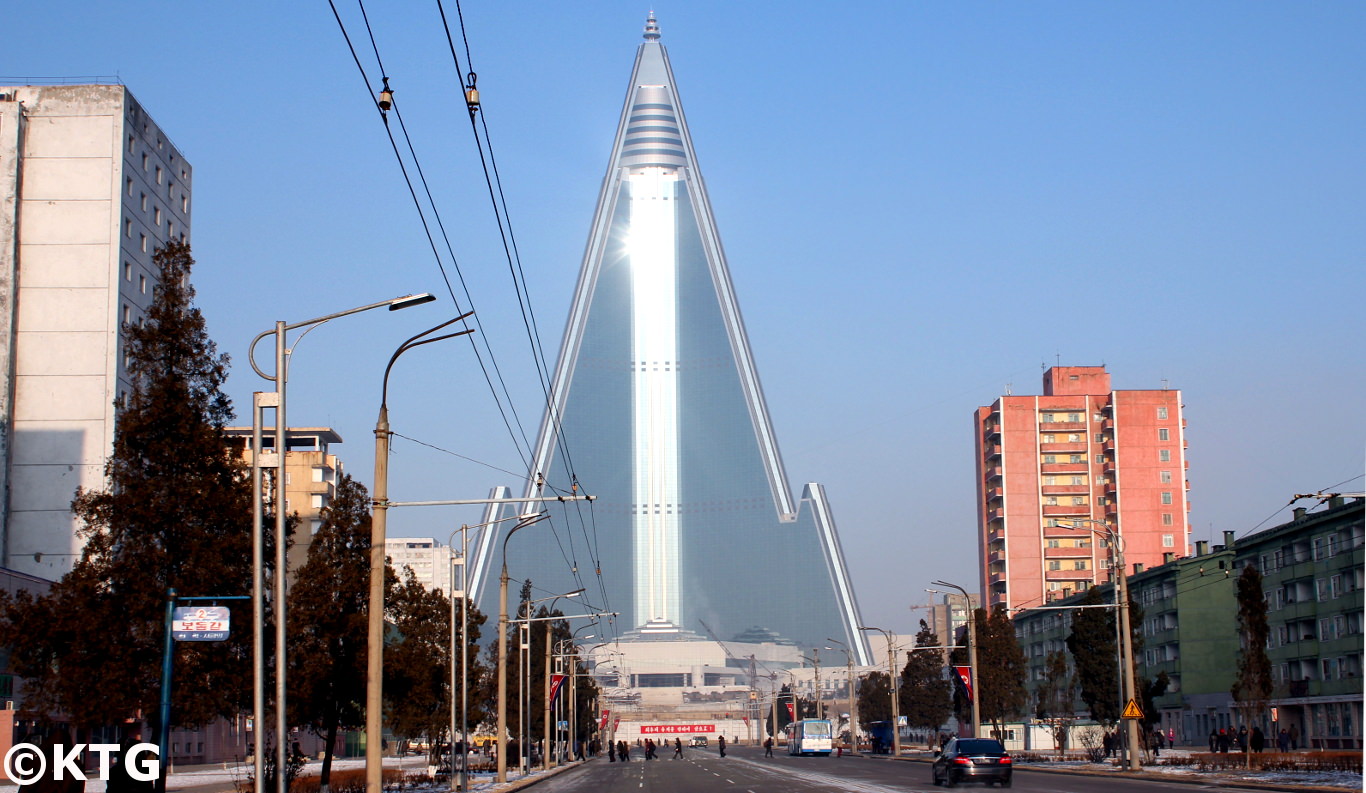 Proudly Shining - We took this picture on Christmas Day 2012. The changes compared to our initial pictures needn't be described by words.

Its importance is such that it has its own mini version in the Pyongyang Folk Park (aka mini-Pyongyang) where the main buildings and most important landmarks of North Korea were represented. This park no longer exists.

A giant walking towards the Ryugyong Hotel? - you can see other famous places in the DPRK represented in the picture above, such as May Day Stadium which is the largest seater stadium in the world and where the Mass Games are held or Mount Paektu.

In 2018 we noticed more work going around the hotel. The wall that surrounded it was knocked down and entrance roads built. Wow! Would this hotel finally open? And in April 2018 bam! There it was! The top part of the hotel was lit in the DPRK flag! What a sight! It wasn't all over though! Come a few months later the whole surface of the building was lit with LED lights showing movie clips, slogans, etc. 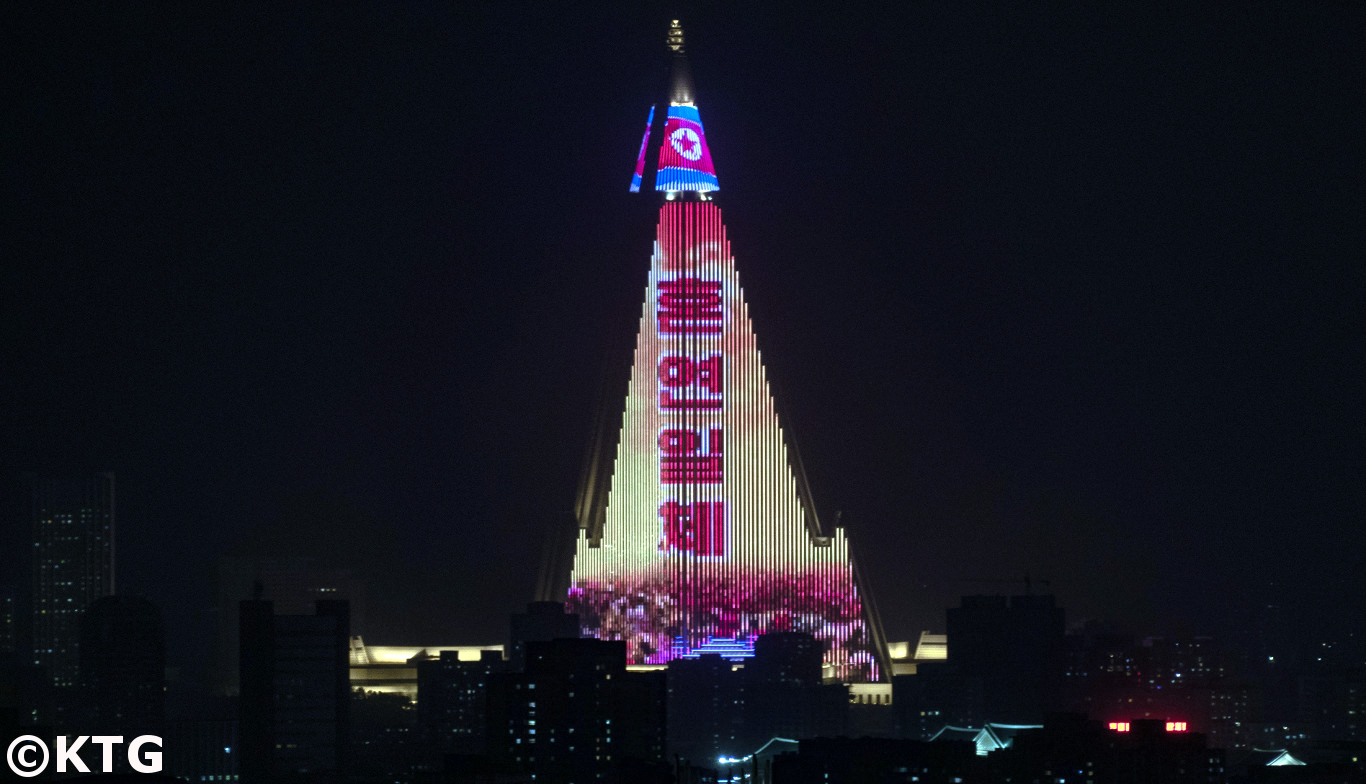 The largest unoccupied building in the word is a giant glass pyramid LED screen in Pyongyang that can be seen all across the city. Indeed, it sounds extremely random. And itâ€™s beautiful.

Now we just canâ€™t wait to be able to have our travellers stay in this hotel in the future and have a bottle of Taedong beer while enjoying the great views from one of the hotelâ€™s revolving restaurants.

Many people think that the Korean War Museum offers great views of the Ryugyong Hotel. Whereas this is true, the best spot to get fantastic, close up views are the National Institute of Embroidery and, most obviously just in front of the hotel itself. It is possible to ask our driver to make a quick stop there in order to see the Ryugyong Hotel from close up. 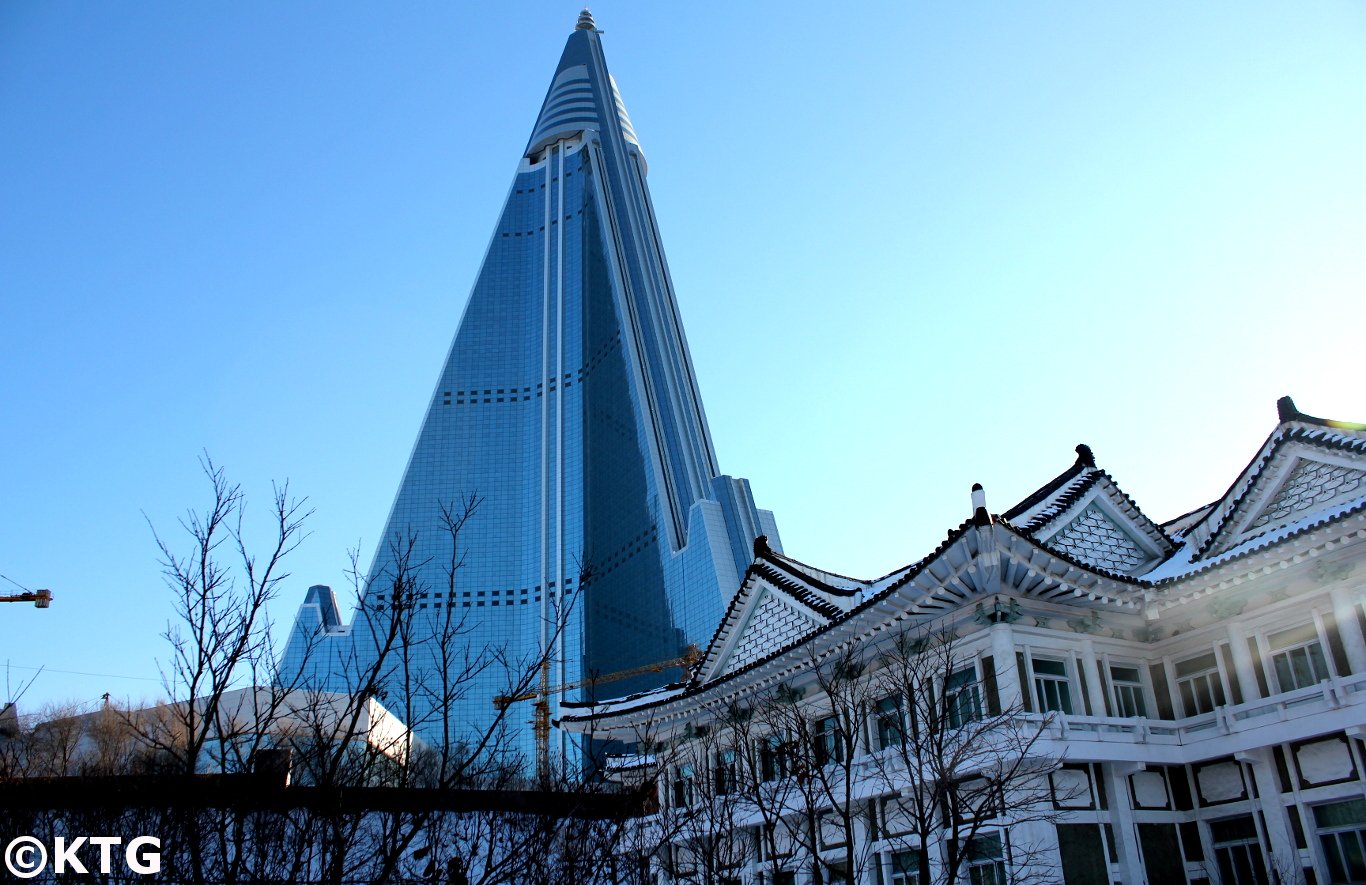 Best views? Compare views of the Ryugyong Hotel from the National Institute of Embroidery above with those from the War Museum in the picture below. 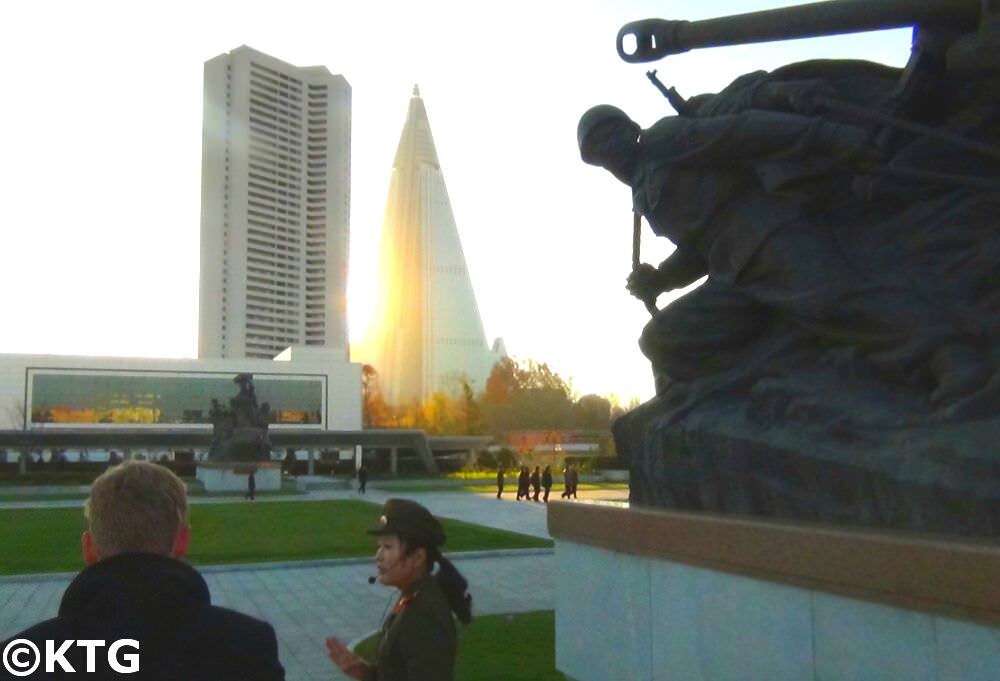 Go from our section on The Ryugyong Hotel to Pyongyang Hotels for more information on other types of accommodation in North Korea.