Helong City (和龙市 in Chinese，허룽 시 in Korean) - city of 220,000 inhabitants in the southeastern part of Yanbian. 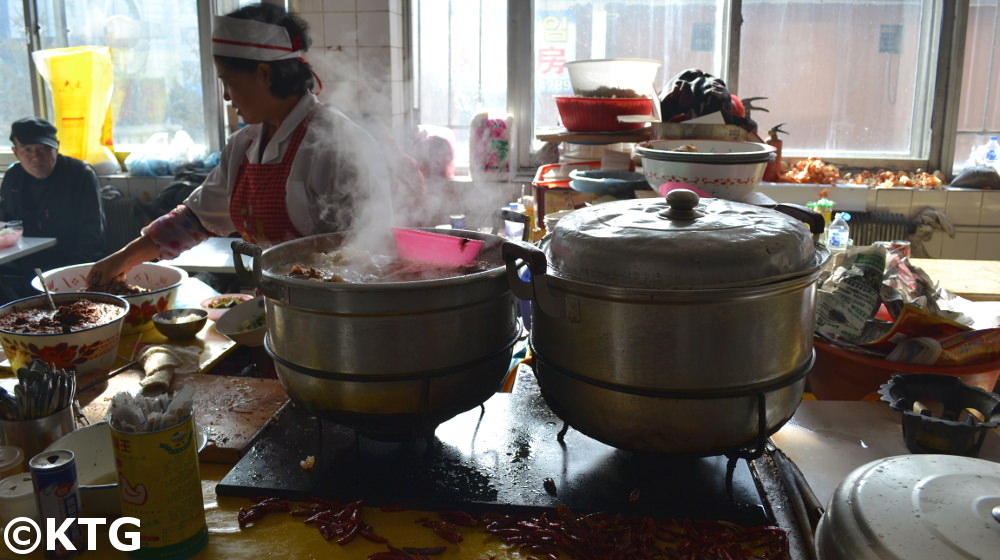 Dog Meat Soup - Ethnic Korean Chinese lady prepares some dog meat soup at her food stand in Helong City. Dog soup is a Korean delicacy popular in this part of China and in North and South Korea.

The city itself is partly surrounded by mountains, which offer beautiful views in spring, summer and white winters. The city, as is common in Yanbian, goes quiet in the winter evenings, but is extremely lively in the summer months. We recommend you to visit the central square at night in the summer as it is full of locals of literally all ages playing games of all sorts such as tijian, volleyball, rollerblading, etc. The site of a Westerner in Helong is less common than in other cities such as Hunchun or Yanji and it will cause more than a few pleasant surprises. 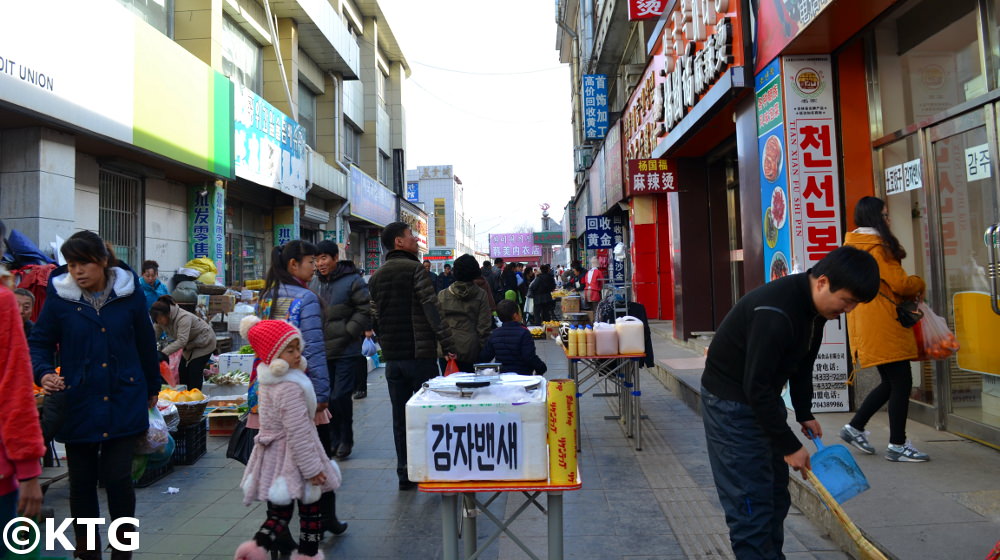 Image of the street market in Helong

Days are busy in Helong, regardless of the season, and we recommend a walk by the street market where Korean and Chinese foods are sold. Having a walk around here will let you absorb the lively atmosphere of the city.

It is fairly straight forward to navigate around the city. The main roundabout has a golden dragon and the places we mention can be spotted from there. 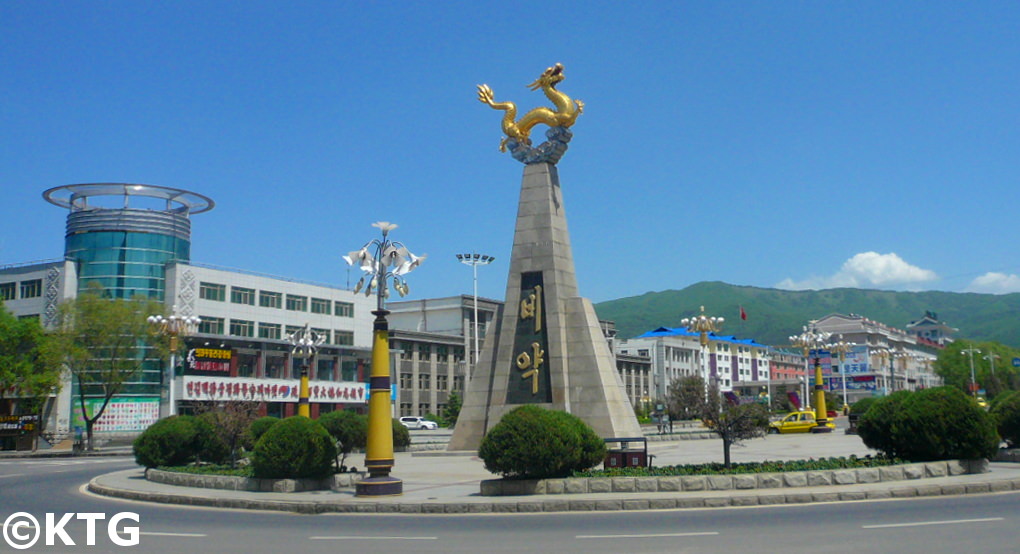 Picture of the city's main landmark. The sign under the golden dragon reads "비약" which means "Leap" or "Flight" in Korean. The other side of the monument has the characters in Chinese (”飞跃“).

The main city bridge going over the Hai Lan River (海兰江）has the figures of two Yellow Cattle; a symbol of Yanbian.

Just in between Helong and Yanji there is the site of where an ancient city from the Tang Dynasty (618 AD - 907 AD) was once located; the Bohai Kingdom Zhong Jing City (capital city of the Bohai Kingdom). This kingdom spread from Northeast China to parts of Russia and the Korean peninsula from 698 AD to 926 AD and was a succession of the Koguryo State (also spelled Goguryeo). 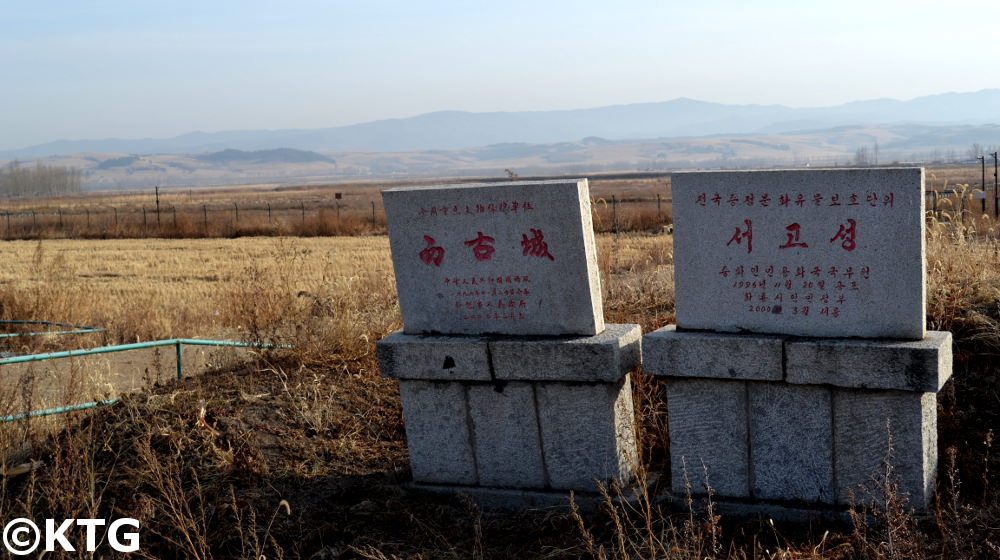 Balhae was an autonomous region under the Tang Dynasty and was built by ethnic Korean and the Mohe ethnic group. It reached its economic peak while trading with parts of Russia, the Korean peninsula and Japan, reportedly having sent over 30 expeditions there. Historians argue that the founders of the Bohai Kingdom, which at one point extended into Russia and Mongolia, had such strength that Silla had built a wall to defend itself from it. 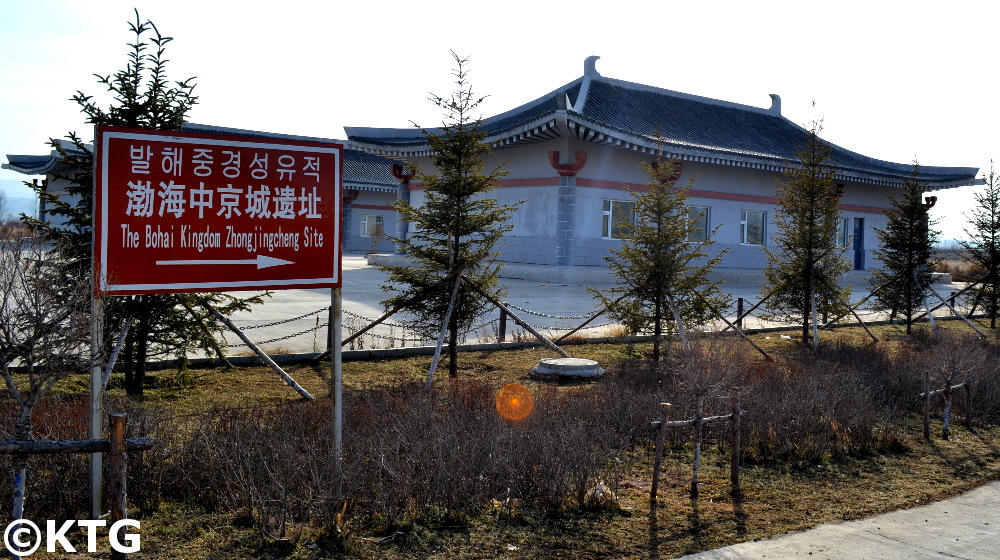 Picture of the museum dedicated to the site. The museum, which has a traditional Korean architecture, is new and, at the time of writing this page, still not opened to the public.

The Khitans surrounded the capital in 926 and after over three weeks defeated the Bohai Kingdom absorbing it into the Liao (辽) Kingdom. The capital was burnt by the Khitans in order to ensure that its inhabitants (who were moved south to what is now Liaoning (辽宁) Province would not return there.

The Balhae Ancient Tombs at Long Tou Mountain, also part of Helong, have been a major source of information to know more about the Bohai Kingdom.

Archeological findings show that this kingdom had a cultural influence from the Chinese Tang dynasty and local ethnic cultures.

Many hotels accept foreigners in this city though they may not be that used to having foreign customers. The Helong Hotel is the biggest hotels and accommodation starts from 260 RMB per room.

Other hotels marked with the sign “Modern Hotel” (时尚酒店） can range from around 100 RMB to 150 RMB per room. Hotels with the sign "旅馆" usually do not accept foreigners, but we have spotted places in Yanji where it is possible to stay in clean rooms with a private toilet for 60 RMB so you may want to ask if you find a place marked with this sign in Helong.

Click on our Yanbian page, the capital of which is Yanji, for more  information on other cities in this fascinating corner of China bordering North Korea and Russia.