Kissing Dolphins, Seals from the East Coast and Water from the West Coast 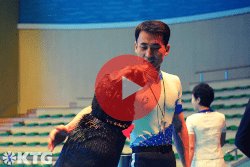 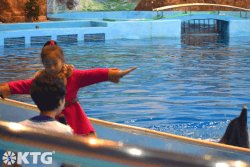 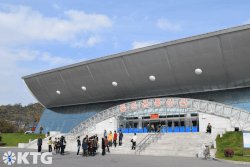 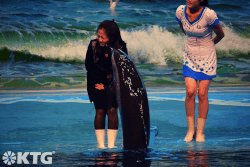 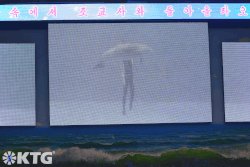 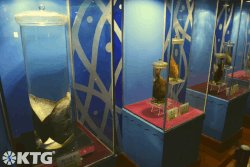 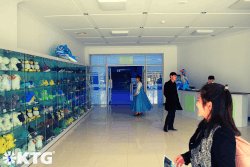 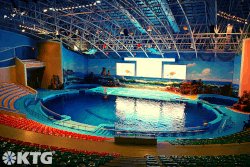 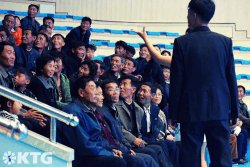 The Rungna Dolphinarium is part of the Rungna People’s Pleasure Park which also has a mini golf course, pool, arcade and its very own trolley system.

The Rungna Dolphinarium is shaped like a dolphin swimming in the sea. The stands can seat 1,400 people. Water is directly pumped from the West Sea of Korea and an impressively realistic backdrop of waves hits a beach where the platform is located. 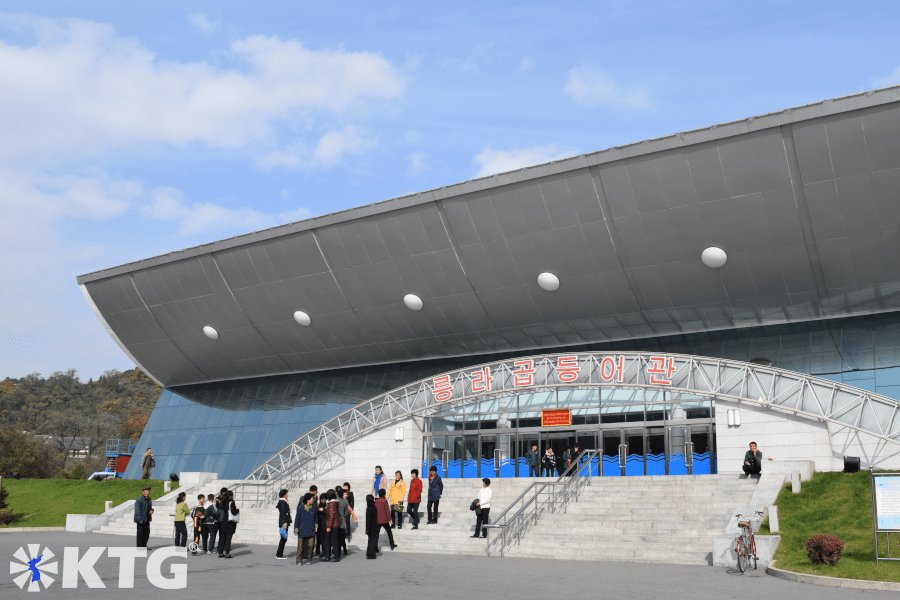 The total area of the dolphinarium is 39,000 m2 and there are three additional small pools.

The dolphinarium has too a souvenir shop, refreshment area and an exposition area.

Much to the delight of the Korean audience, professional trainers lead a superbly choreographed dolphin. These dolphins are not the most easily trained breed, but you wouldn’t guess it. 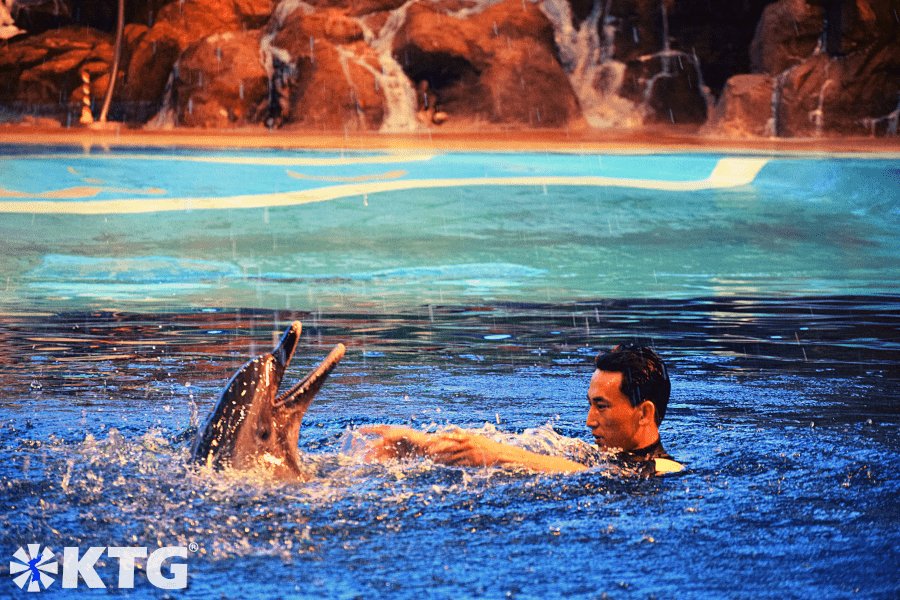 The trainers then pick one or two people from the audience, give them some wellington boots and ask them to go the main platform. 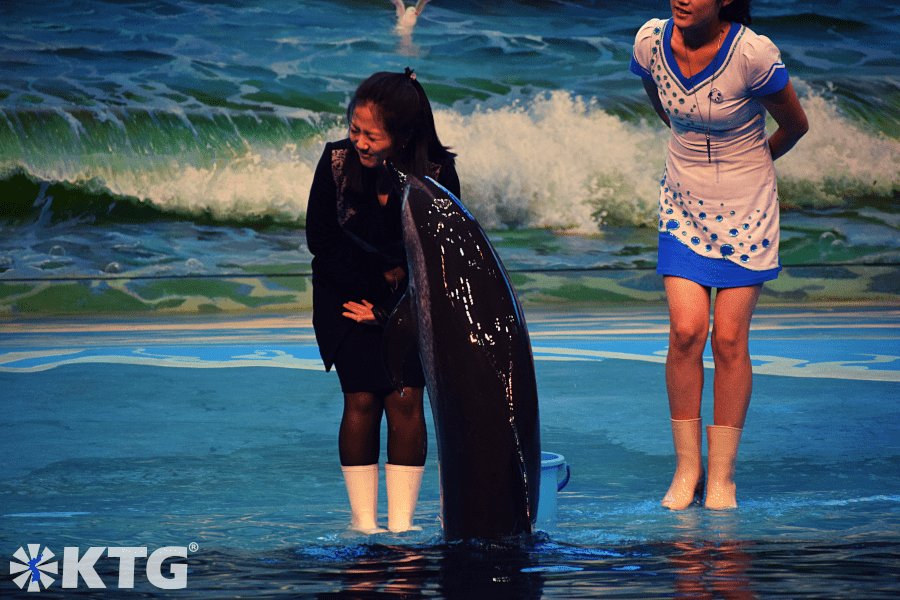 Our friend and tour guide, Kim Sung Mi, is kissed by a dolphin

The dolphins get close to the lucky ones picked and, in the case of women, a dolphin will pop out of the water and kiss her. The reaction of locals is absolutely priceless. If you were one of the people picked from the audience, you will be handed a picture of yourself with a dolphin! 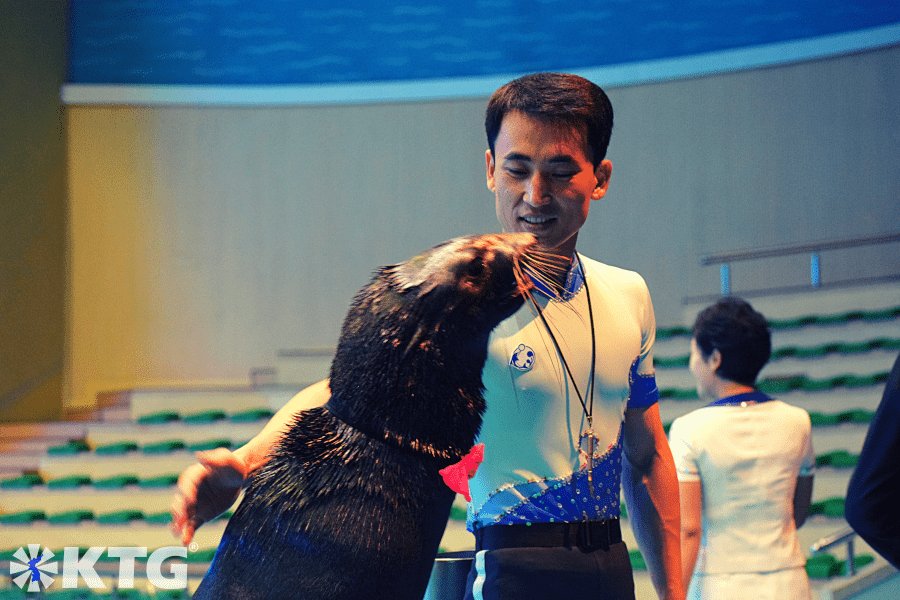 Seals live in the wild in the East Sea of Korea

Another part of the show consists of seals shooting hoops and handing (or should we say mouthing), flowers to people in the crowd. These seals were brought from the East Sea of Korea and then trained. In, fact if you go to Rason, you can take a boat trip to spot seals in their natural environment.

If you would like to see what is going under the water, then head to the bottom row, where the glass windows will allow you to see what goes on beneath the surface. 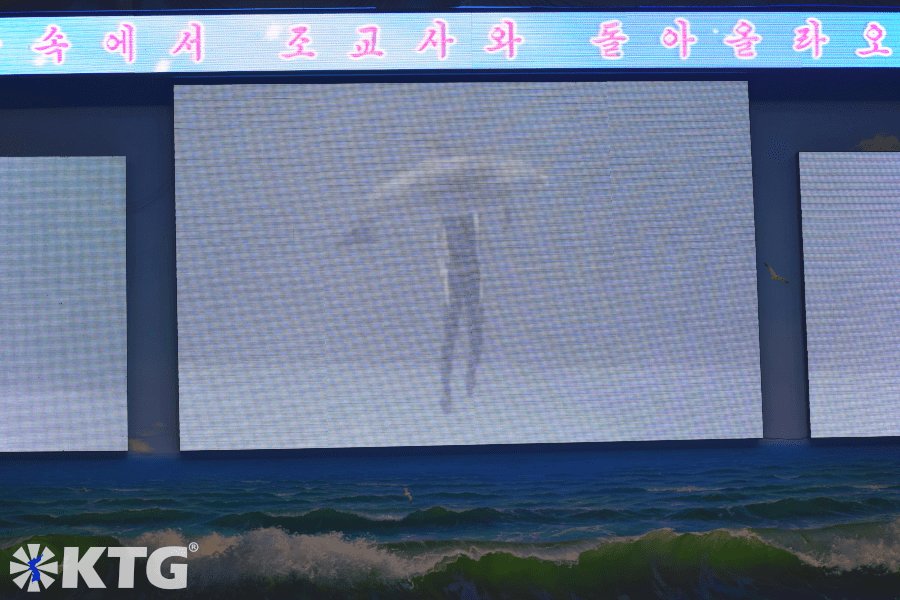 What's going on under the surface?

There are too huge LED screens that show what’s happening under the water as well as close-up views of the performance.

Once you leave the show area you can go through the Rungna Dolphinarium’s museum. 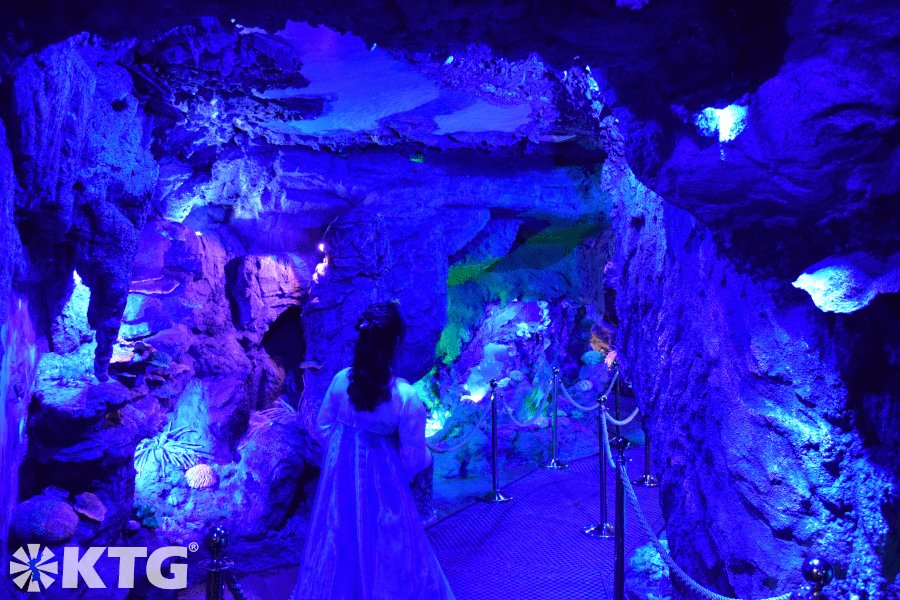 Jarred specimen of sea animals can be seen. 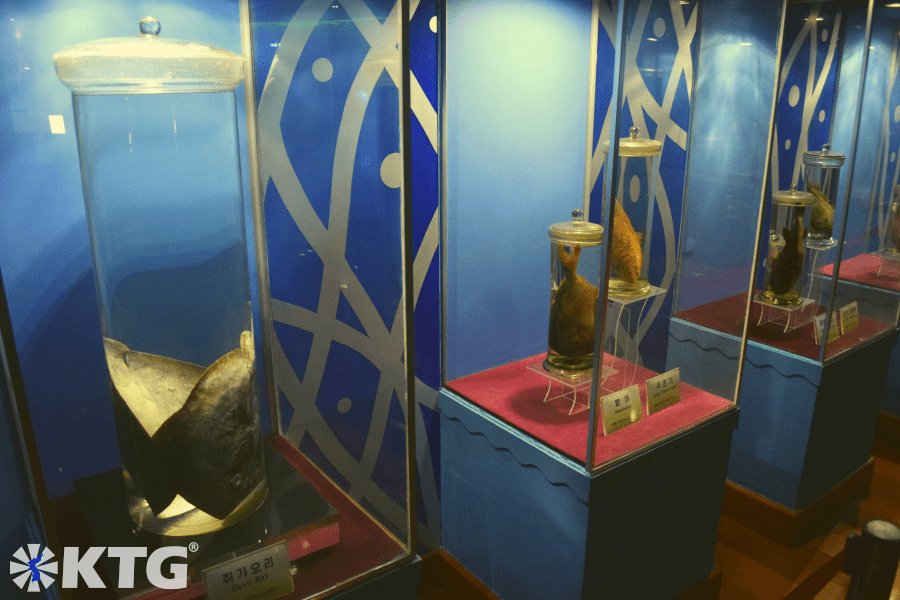 There is too a section where you can see models of sea creatures including some found around the Korean peninsula. 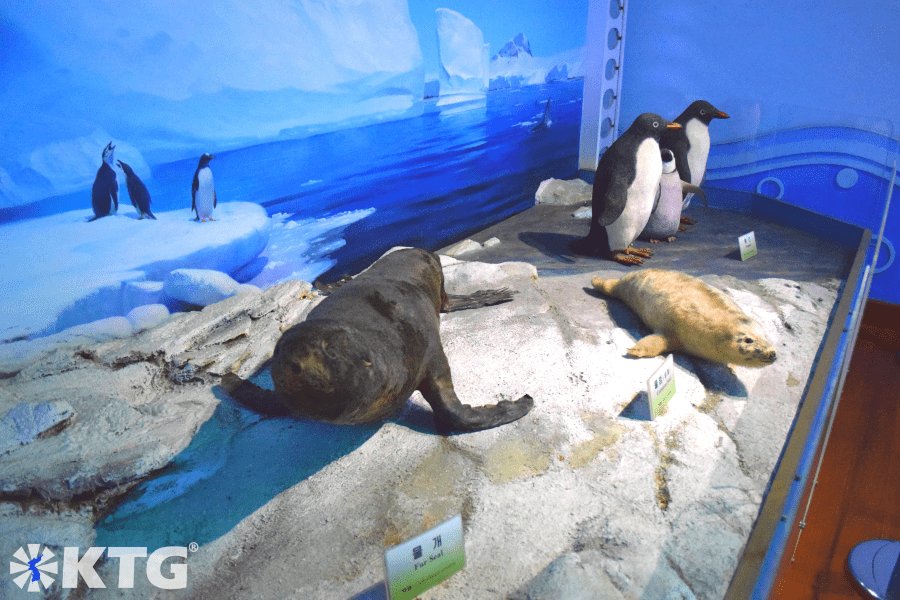 There's a small shop where you can buy stuffed animals. May not sound that interesting, but how many people do you know with a blow-up dolphin from Pyongyang or a North Korean penguin? 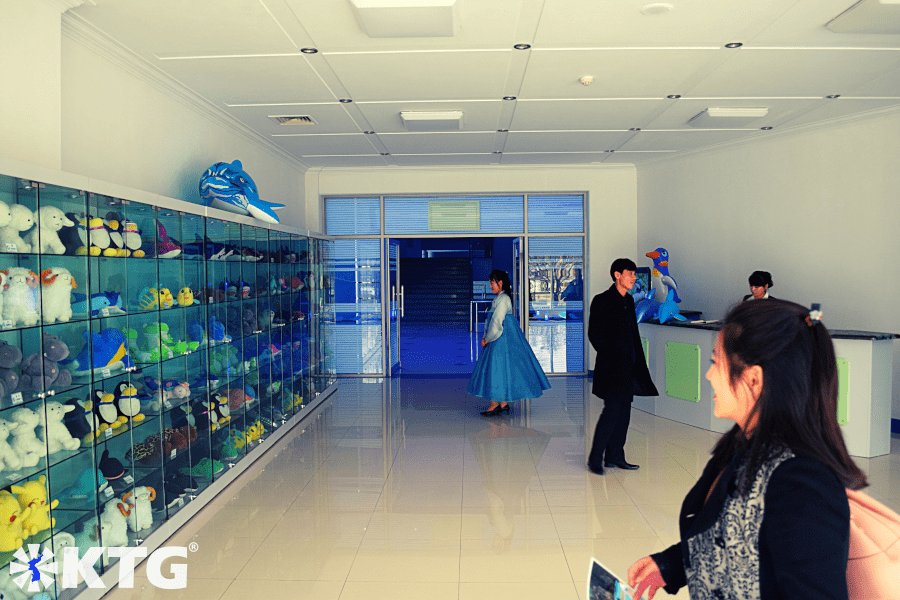 Souvenir shop at the dolphinarium

The water in the dolphinarium is pumped 50 km directly from West Sea of Korea by Nampo. That’s one long tube. 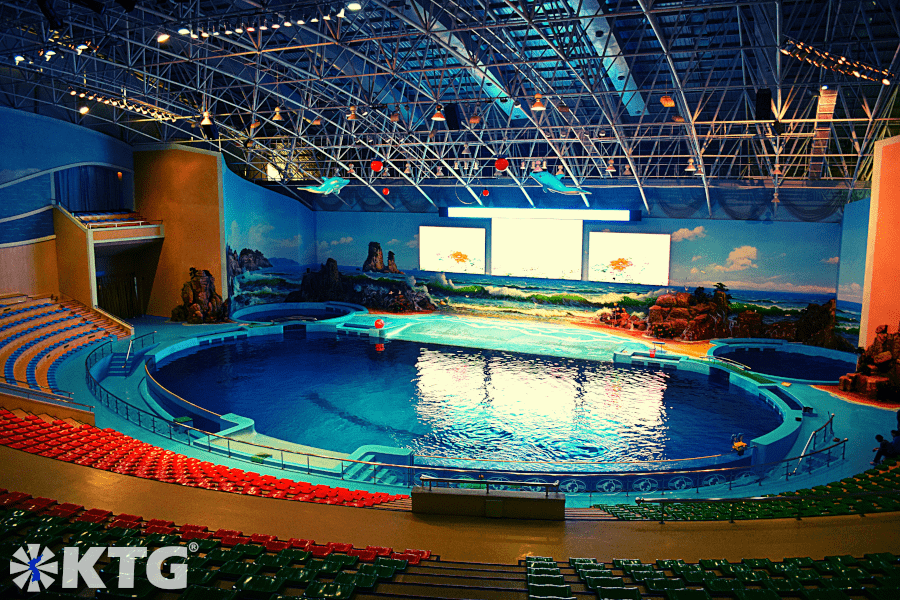 Water is pumped directly from the West Sea, about 50 km away

The entrance to the Pyongyang dolphinarium is 5 Euros. 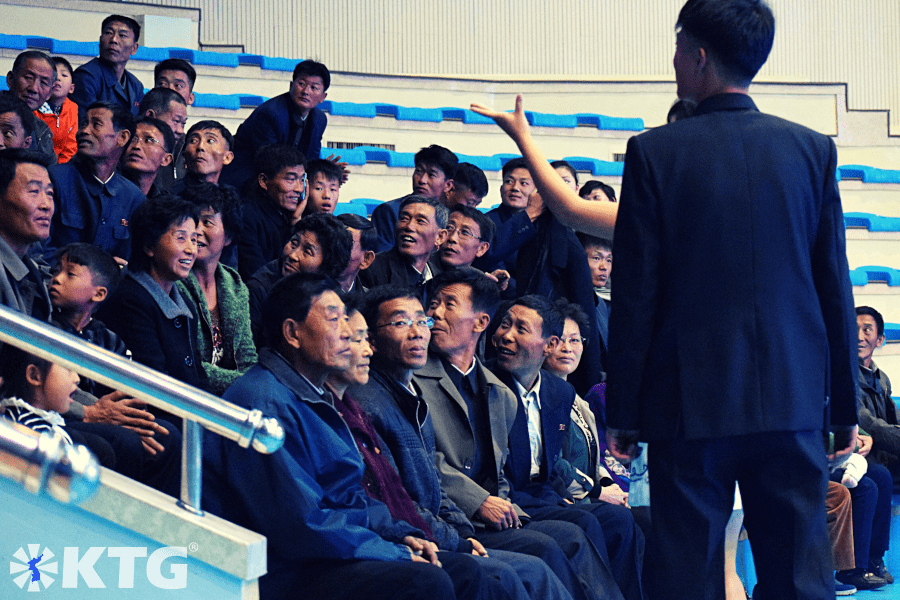 Locals having a blast at the Rungna Dolphinarium

We do not arrange visits to the Rungna Dolphinarium on our group tours. However, a visit here can be arranged if you go on a private tour to North Korea or if you have a tour extension.

We understand that dolphinariums and zoos are not for everybody. 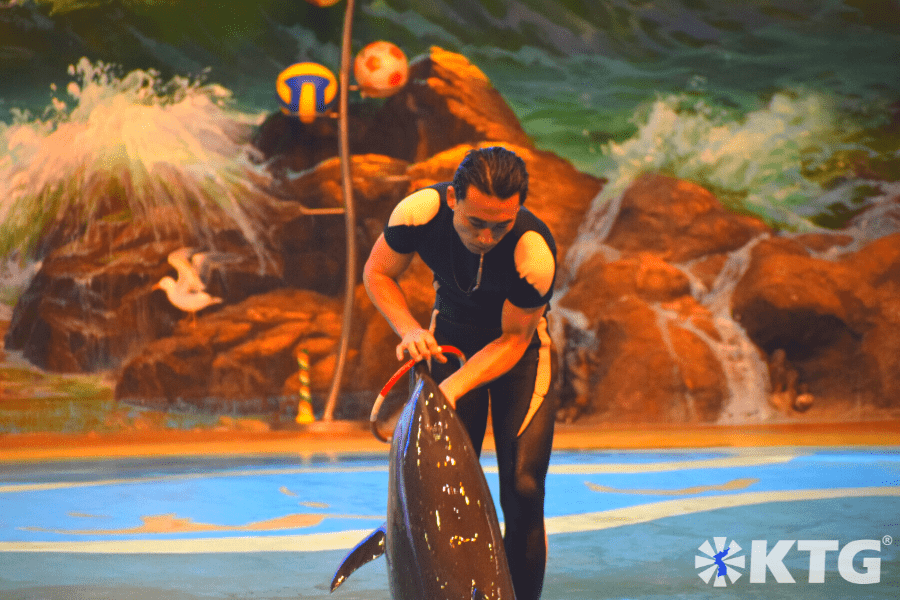 A great advantage of going to these places is that you get to hang around with Korean families and see them having a blast!

Please click on our North Korea Travel Guide for a list of more places that can be visited in the DPRK other than Rungna Dolphinarium.