Dunhua is another major city of the Yanbian Korean Autonomous Prefecture. Located135 KM northwest of Yanji, its population is of approximately 480,000 in spite of being a country level city. You can take a train or bus from Yanji to Dunhua (敦化 in Chinese, 돈화시 in Korean). The trip takes around 2 hours by bus or 2.5 hours by train or 45 minutes if taking the bullet train.

UPDATE:As of 2015 the bullet train operates between Dunhua and Yanji and the trip takes from 39 to 45 minutes (it depends on the train you get) only! 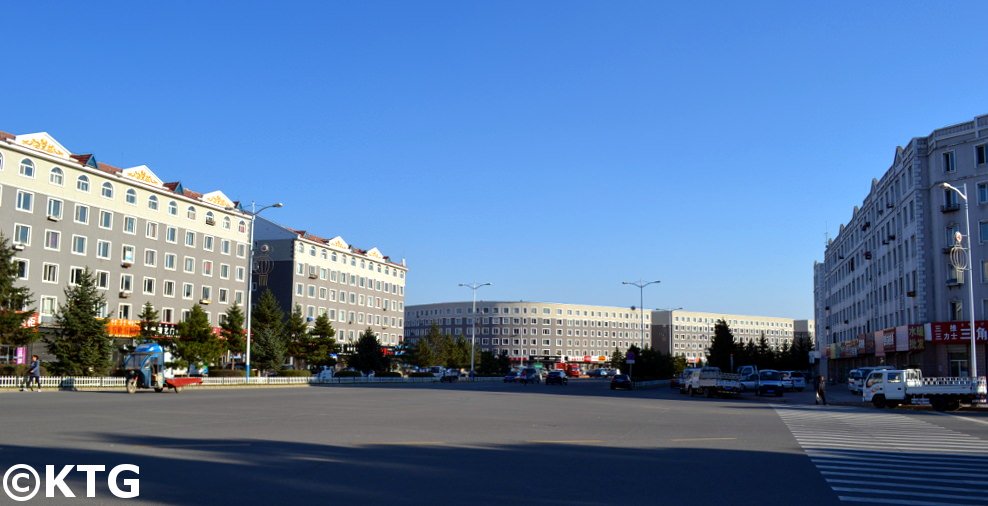 Chang Bai Road - like other cities in Yanbian, Dunhua is a very clean city and some of its buildings have foreign architectural influence

Those of you have been to Yanji or Tumen by train before may have noticed the city's giant Buddha Statue from the train; an impressively massive bronze structure that can be seen from miles away.

Host of the giant Buddha Statue, If you would like to go to Liu Ding Shan you can take a taxi from the city centre (15 RMB) or a bus (2 RMB). The entrance fee to the temple is 80 RMB per person, a 50% discount is available if you present evidence of being a student in China as is the case in most tourist spots in the country. 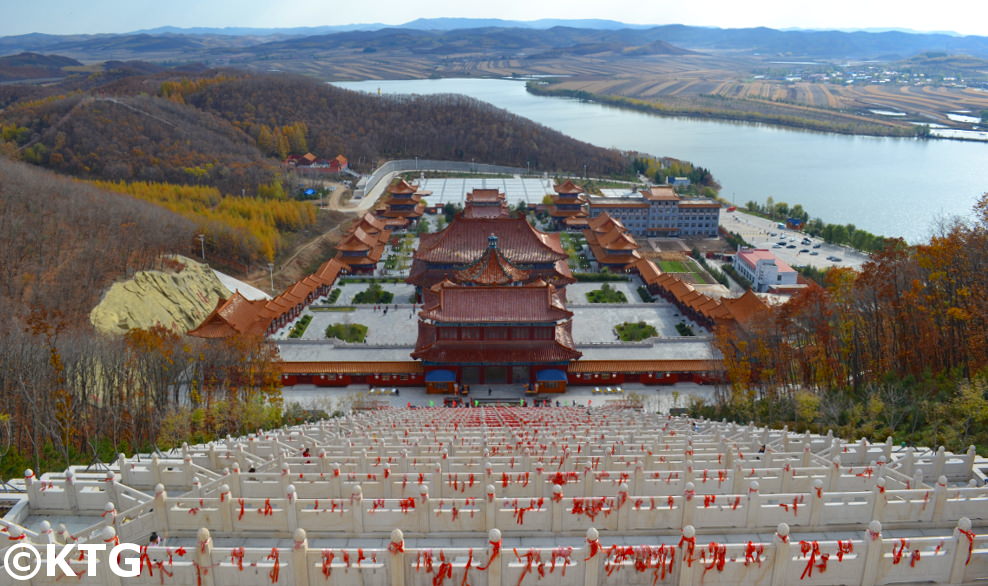 Walking up towards the temple takes around 20 to 30 minutes and is highly recommended as, not only will you be able to enter the giant buddha statue which itself inside is its own site, but you will also have fantastic views of the whole of Dunhua.

This park offers good view of Dunhua atop the hill which hosts a Revolutionary Monument. There’s a small funfair at the bottom of the hill and an open cemetery right by the funfair.

Going to Bei Shan Park costs 5 RMB by taxi from any point in the city. 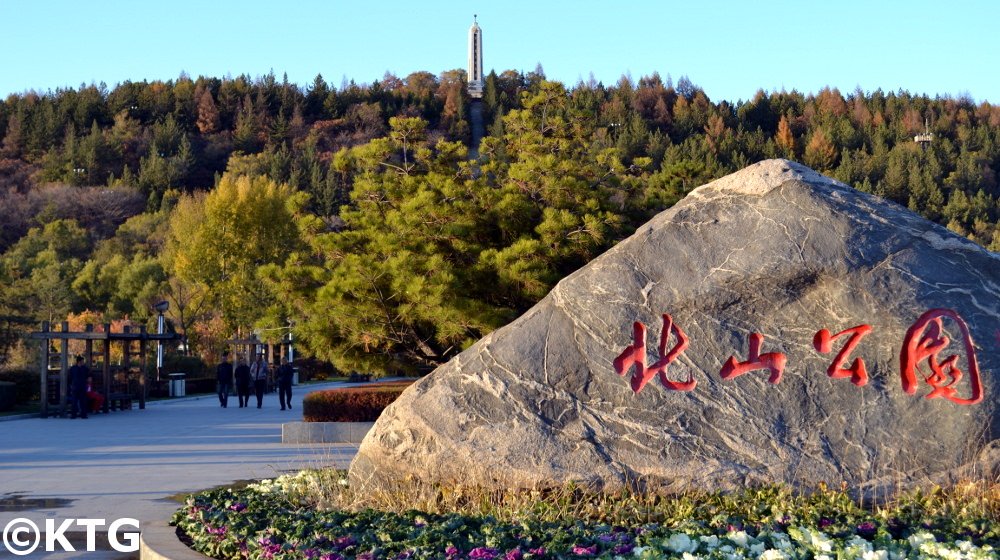 If you go west on where Qing Hua Road (qing hua lu, 清华路) and Ao Dong Dong East  main street (ao dong Da Jie, 敖东大街）meet there is a street serving the best BBQ seafood in town. Please note that these places may be full at around 6 pm and unwilling to serve a small group of customers as they tend to have limited space but high demand. 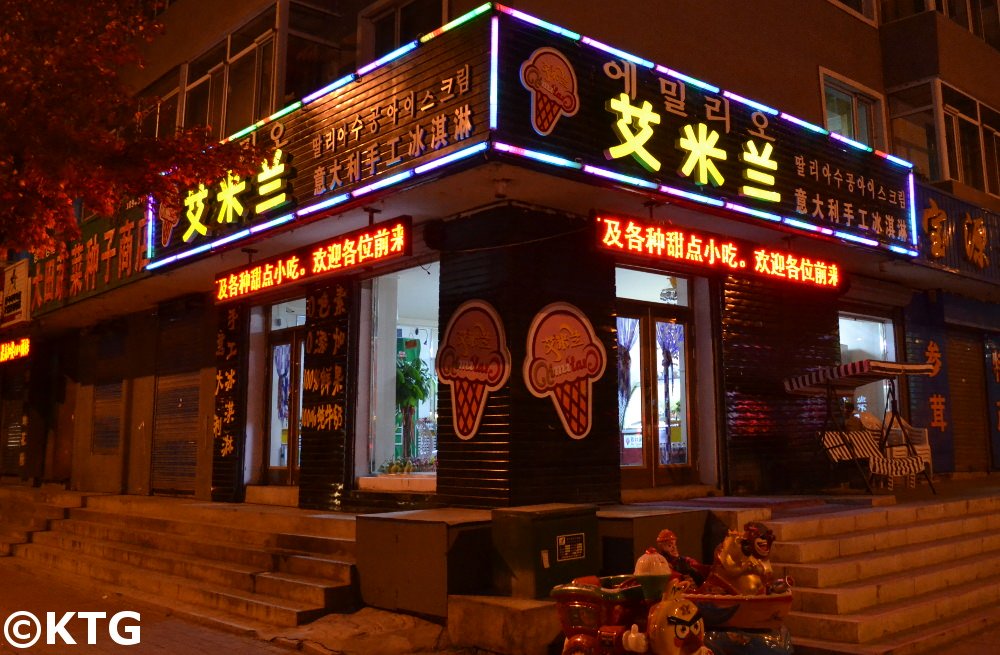 There are several hotels in Ao Dong Da Jie. The Jin Hao Hotel has twin rooms from 120 RMB. The same avenue has a series of different lodging options as you approach going to Bei Shan Park. Generally speaking foreigners cannot stay in the cheaper lü guans (旅館) though we have found some in Yanji where it has been possible for us to stay for as little as 60 RMB per room per night so you may want to try when in Dunhua.

Unlike Yanji where the number of bars and nightclubs has drastically increased in the past few years, Dunhua does not have a rich nightlife scene, though there are many karaokes around the city.

Interesting - check out the park between Chang Cheng lu (长城路) and Qing Hua lu in the evening and feel free to join in with locals playing tijian (踢毽) - where a heavy shuttle cock is skillfully kicked from one player to the other. Be warned though that the skill level shown is extremely high! They even have tijian matches with several courts and nets taking the game to the pro level! 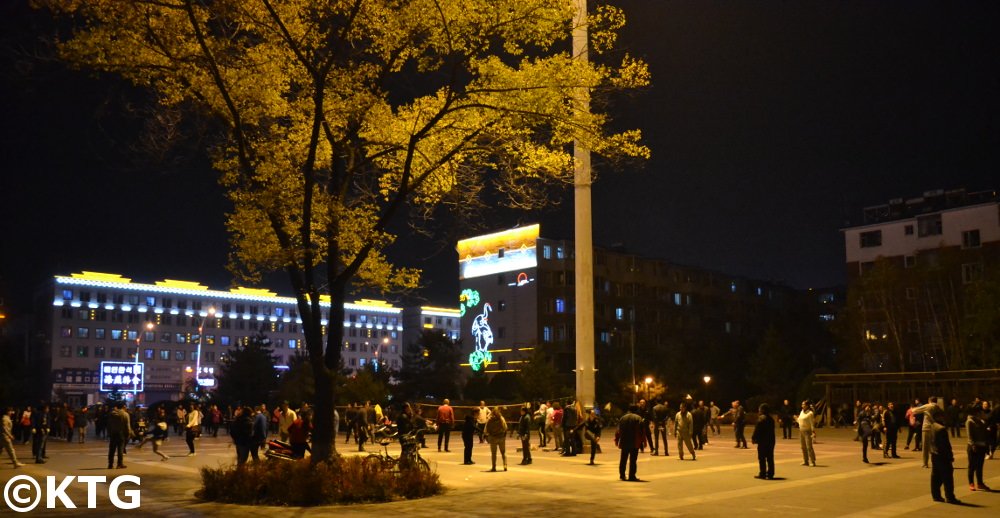 If you would like to go to Dunhua you can take a train from Yanji or a bus from the bus station across from the train station. The train takes 2.5 hours and a ticket costs 21 RMB (for a seater).

Click on our Hunchun page to go from our Dunhua page to see information on other cities in this fascinating corner of China bordering North Korea and Russia.
index-column.html
© Copyright 2008-2022 www.north-Korea-travel.com. All Rights Reserved.
KTG ® is a Registered Trademark.