The Nampho West Sea Barrage is located 15 km away from Nampho city. Covering a length of 8 km across the estuary of the Taedong River, the West Sea Barrage was built by the Korean People's Army in 5 years by 1986 (Juche 75).

The observation platform, which is shaped like an anchor on the Pi Islet, allows people to enjoy a panoramic view of the barrage on which a motorway and railway run. The barrage links both shores of the Taedong River.

Below is a 360° image of the West Sea Barrage. Please check our KTG Xploris® DPRK Panorama section for more 360° images of the DPRK. The newest ones have sound too, allowing you to see and hear the DPRK in an interactive way that you may have never experienced before! 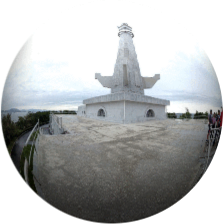 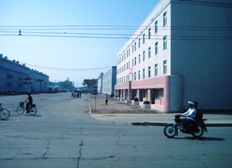 The West Sea Barrage has not only helped the economy of the area but has also turned the Taedong River in a man-made lake, separating it from the West Sea and therefore guaranteeing fresh water for agriculture and people's daily lives. It provides electricity for itself and the surrounding area, avoids the risk of floods and allows ships to sail inland.

You will ride on the barrage on the motorway by the railway with the Taedong River on one side and the West Sea on the other. 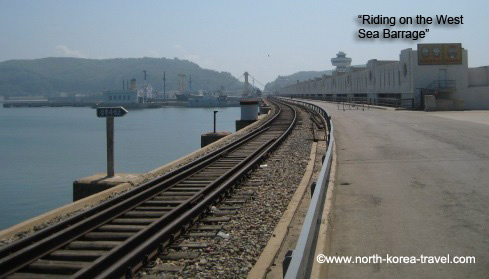 There are several small beaches in the area where locals gather.

When we go to the West Sea Barrage we will be able to watch a video explaining how it was built and its features and can then ask the local staff member there any questions regarding it. The video shows how much importance and pride is attached to this impressive structure. It is also interesting to see how its construction is portrayed, with scenes of heroic DPRK soldiers battling the sea in order to build it successfully and military music played in the background. The construction of the barrier is themed in a military almost war-like tone.

Please click here to see what other areas you will be able to visit other than the Nampho West Sea Barrage while visiting North Korea.