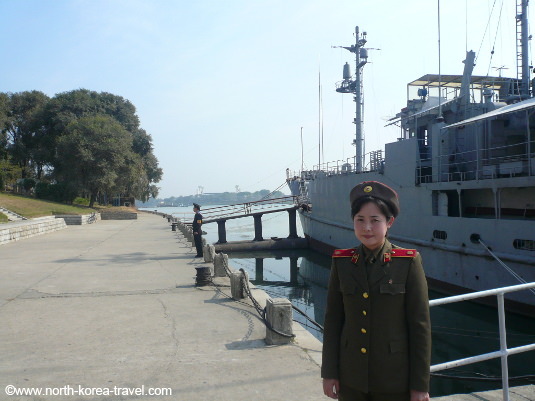 USS Pueblo guide seen in the image above dressed in a military uniform with the pin of President Kim Il Sung. The vessel is now used as a tourist attraction by the DPRK and officially seen as evidence of American hostility against North Korea. Visitors are given the North Korean side of the story as they walk on to the Pueblo. The tour concludes with a video of the vessel's crew members.

We took this picture several years ago in 2009 at the original location of the ship. The ship was moved in 2013 and is now by the new Korean War Museum in Pyongyang.

Please click on our North Korea Tours section to go from the USS Pueblo Guide page to a list of other areas you will be able to see while visiting North Korea.