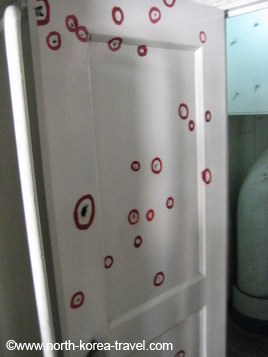 The incident was also called the "USS Pueblo Crisis" given its potential magnitude (the DRPK was a strong ally of the Soviet Union at the time, which, it is now suggested, was to some extent behind the incident). In the image above are bullet holes the vessel received from the DPRK navy. One crew member was killed in the shootings. The crew members were ordered to burn sensitive information they had onboard once it was clear that there was no escaping from North Korean forces. The Pueblo is the only US vessel currently in possession of another country.

Please click on our North Korea Tours section to go from our USS Pueblo Crisis page to a list of other areas you will be able to see while visiting North Korea.