A trip to Hekou Village across the DPRK

Dandong (丹东) is the border city we go through when entering and exiting North Korea by train.

There are a variety of sites worth visiting here, including a Great Wall section that is just a few meters away from the DPRK. You can read about these in our Dandong page.

Check our 360° image of the Friendship Bridge connecting China and the DPRK by clicking on the bubble on the right!

However, a little visited, but absolutely fascinating area close to Dandong is Hekou Village (河口村). There are boat rides here that, unlike those arranged in Dandong, allow you to have close up views of rural DPRK and of some factories. It is also a historical site as it is the entry point where the Chinese forces entered Korea in the Korean War to aid the DPRK. There is a broken bridge on the river front that used to connect China and Korea.

After our June Summer Tour a few of us stayed in Dandong for two nights. I took the speed train from Shenyang to meet up with our tour leader, Tim, and our traveller Zac who joined our group. As I glazed out of the train window into endless beautiful sceneries offered by national reserve parks that the high speed train crosses at over 250 km per hour I realised that there’d be no need for me to use the sunglasses I’d packed and that I could have done with an extra layer or two. 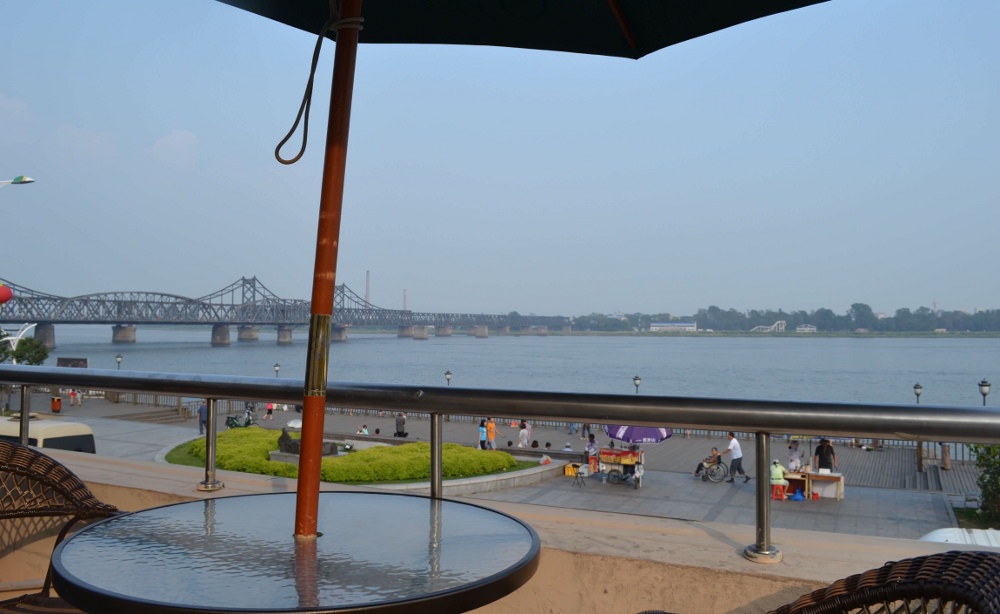 The weather I had expected - Views from a coffee shop of the Friendship Bridge connecting Dandong (China) to Sinuiju (DPRK). Dandong is a popular tourist destination for many Chinese

Regardless, I was excited to see what Tim and Zac made of the trip in Korea (Tim had told me over the phone that it had been a great trip) as June is one of the quietest periods in DPRK tourism. We had a group of only 8 people plus Tim. I was also eager to see what they’d make of our upcoming trip to Hekou Village...

Tim has been going to Korea pretty much each month this year with our groups and has stayed in Dandong too but he had never been to this village, an important landmark in the Korean War as it is the point of entry used by Chinese soldiers to go to Korea and aid the DPRK forces.

Mao Zedong’s son, Mao An Ying, entered the DPRK though here and never returned, having perished in the conflict. A statue there by the river front marks the memory of young soldier and of those many others who never made it back.

After a cup of coffee at the local KFC (very local, indeed) we took the 11.30 am bus to the border village of Hekou, which is roughly an hour North-east of Dandong.

Driving mainly by the Yalu River (Anmok River in Korean) that divides the DPRK and China, we talked about this trip and exchanged stories of our travels to the DPRK. The side of the road on the is always fenced and has barbed wire whenever by the river which marks the separation of what essentially seems two different worlds.

When we arrived at Hekou we hopped on a pedicab driven by a friendly local who took us to the riverfront.

The weather was still not looking promising as it drizzled down. Across the river a huge layer of fog, the DPRK nowhere be seen from our side of the Yalu despite is closeness. We were, however, not giving up, and determined to take the boat ride... 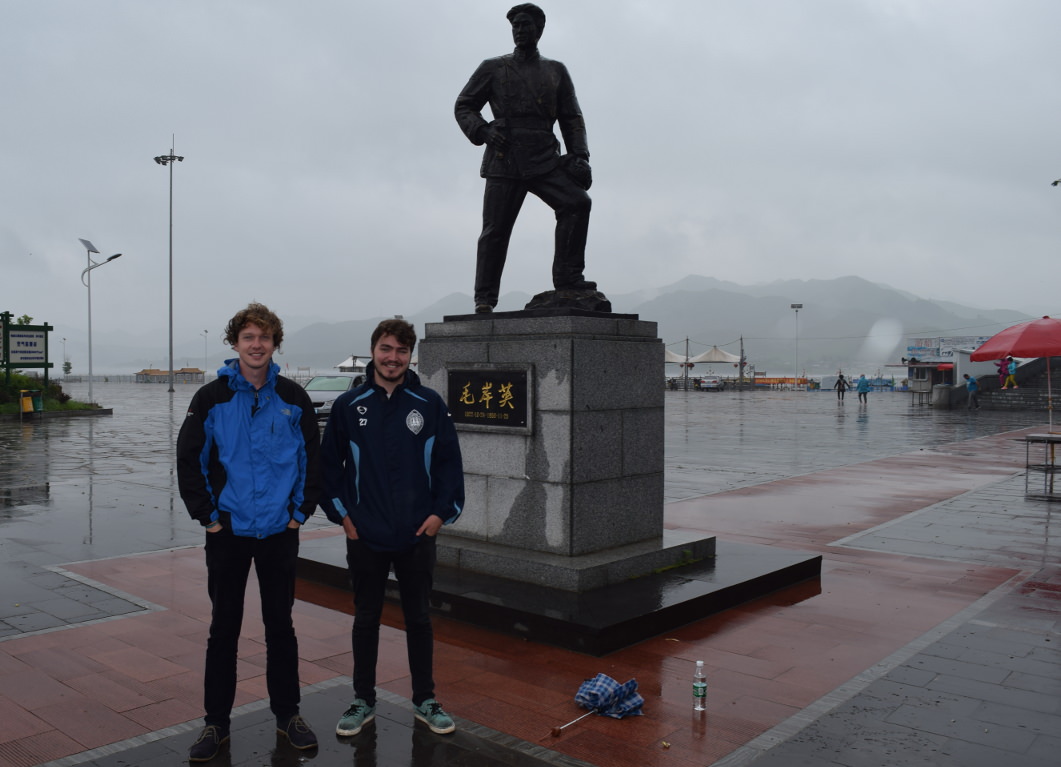 Tim and Zac by the statue of Mao An Ying, Mao Ze Dong’s son who died in the Korean War

"The boat leaves in 25 minutes" the lady at the ticket stand told us. "You’ll ride by the factory area of the town, it'll be about an hour long ride." We stacked up on snacks and refreshments and duly turned up on time unsurprisingly being the only travellers on the boat which had a seat capacity for 50 people.

As we headed in the direction of North Korea and into the fog, I couldn’t help but notice Zac and Tim’s excitement and slight nervousness. "The fog and rain makes it all seem so spooky" one of them said. 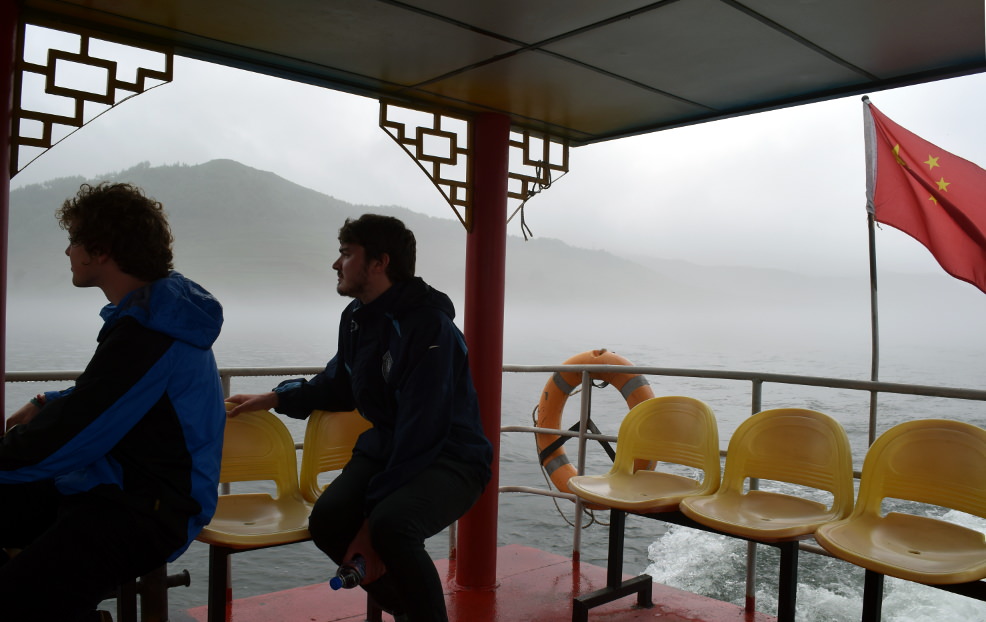 Getting closer to Korea

A land of mystery - the fog seemed to suit in perfectly with the idea of our approaching a mysterious, unknown secretive land.

And then, after a few minutes of navigating in the thick fog, literally unable to see a few meters ahead from our boat, Korea appeared in front of us. 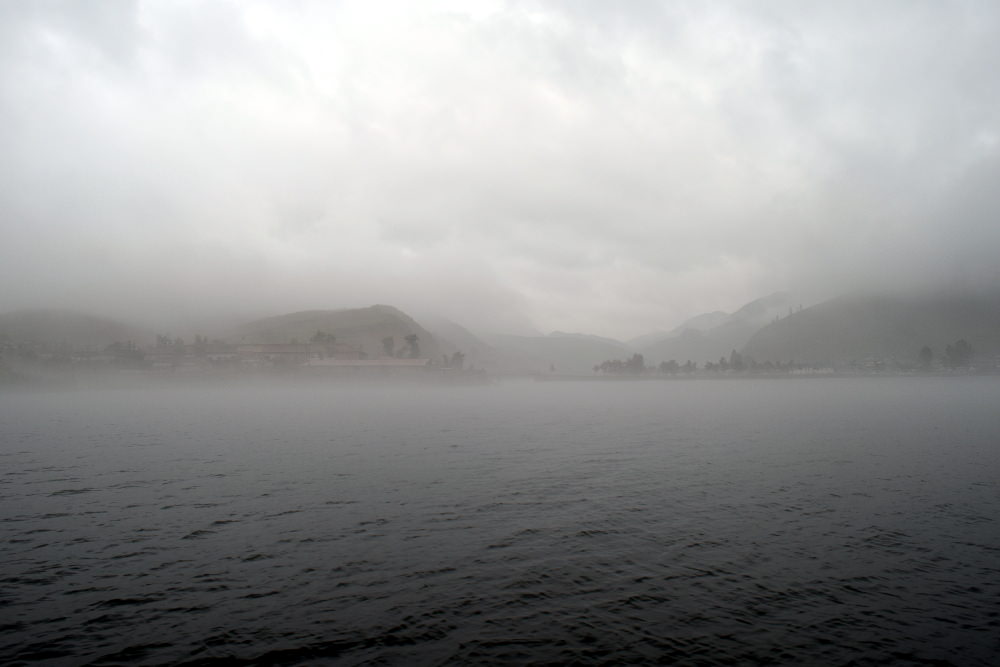 First sights of North Korea - after riding through some thick fog, the DPRK suddenly appeared in front of us.

We could clearly see locals getting along with their daily lives, riding their bikes over the town bridge, farming... A little girl by the river side waved at us happily as we rode by. We eventually passed by some factory buildings and saw those features that make the DPRK so distinctive; giant portraits of the leaders Kim Il Sung and Kim Jong Il, an eternity monument marking the immortality of the leaders in the hearts of the Korean people, giant concrete slogans painted in white on the hillsides... Despite only having been there recently and going in every month with our travellers, seeing the DPRK from China, especially rural and industrial areas of the country, makes it always seem to be a faraway and enigmatic country. Once in Korea though you immediately remember how friendly and normal people in the DPRK are and how our preconceptions of the country influence the way we perceive it.

The boat reached its final point before turning around. As we headed back into the fog and started to approach Hekou we took our few last glimpses at Korea... until our next tour that was. 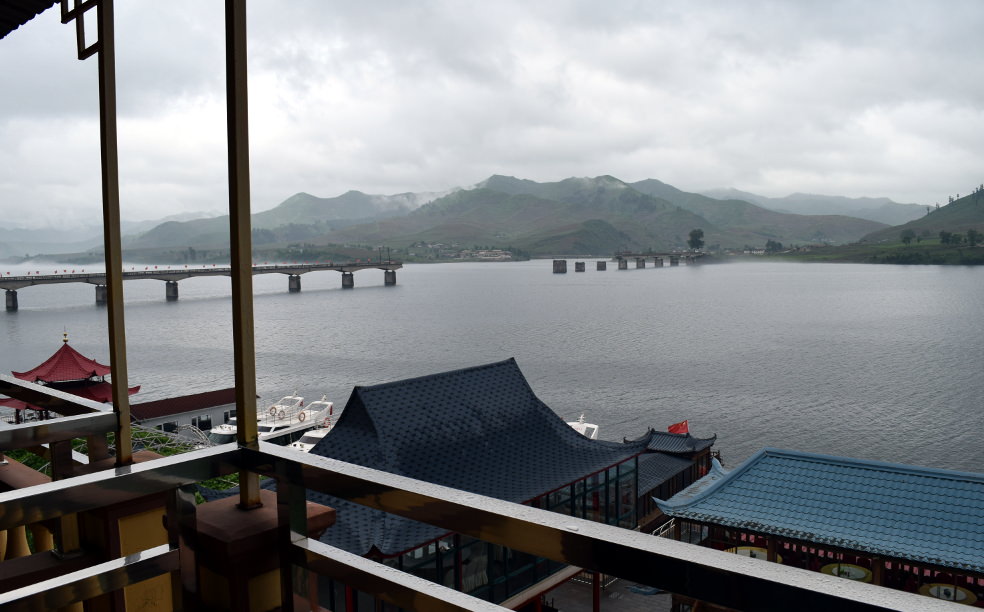 Hotel Room Views - the day had cleared up a little when we took this picture from the local hotel room.

If you’d like to wake up to this view do please contact us for information regarding our Dandong & Hekou Extension Tours!