IMPORTANT: Please note that it is very important for travellers to understand that the figures of the leaders of the DPRK are highly respected by the Korean people. Under no circumstances should travellers ever show any sign of disrespect toward the Korean people, the Korean leaders, the country or the regime. Koreans are in general very friendly to foreign travellers and their curiosity and friendliness is almost tangible. However, they are too a proud people proud of their country, leadership and origins.

At the end of the Second World War in 1945, then General Kim Il Sung (President Kim Il Sung) returned to Korea. His son, Chairman Kim Il Jong, still at a very young age, was to rejoin him in Pyongyang later that year. 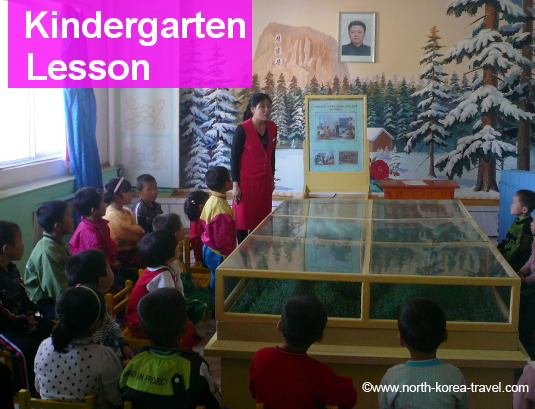 In the image above you can see a history lesson at a kindergarten. The image in the background shows the cottage where Chairman Kim Jong Il was born in Mt. Paektu and if you notice the board in the front you can see the image of Kim Jong Il lecturing his classmates.

Chairman Kim Jong Il was extremely involved in politics, being member of the Democratic Youth League, promoting political discussions in school amongst schoolmates and organising extra-curricular activities such as factory visits.

Please click on the link Leader Chairman Kim Jong Il to go from our section on Leader Kim Jong Il's early life to see information of other life periods of one of the DPRK's leaders life.