Kumsusan Palace of the Sun

The Most Sacred Place in the DPRK

The Kumsusan Palace of the Sun is the most sacred place in the DPRK. It is where the Leaders President Kim Il Sung and Chairman Kim Jong Il lie in state. It is not a tourist destination and very specific rules must be followed when going there. 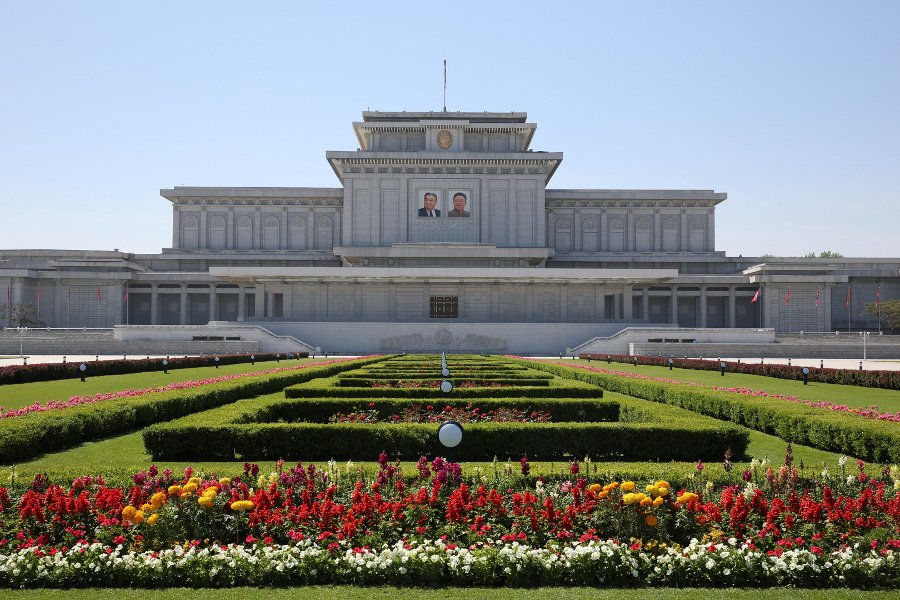 Important: Not to be Called a Mausoleum

We will brief you carefully before the tour regarding how to behave here. If you plan to go to the Palace of the Sun and would rather find out what this place is like when there, then DO NOT READ THIS PAGE as we will describe what it is like in detail here and reading this page will spoil any surprises. 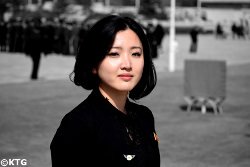 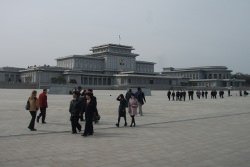 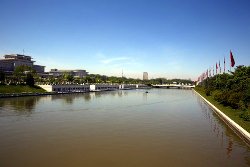 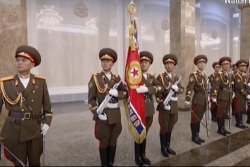 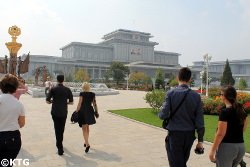 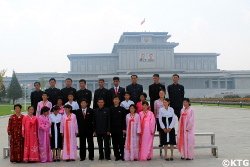 Location of the Kumsusan Palace of the Sun

The Kumsusan Palace of the Sun is located in the North of Pyongyang about a 15 - 20 minute drive away from the city centre. 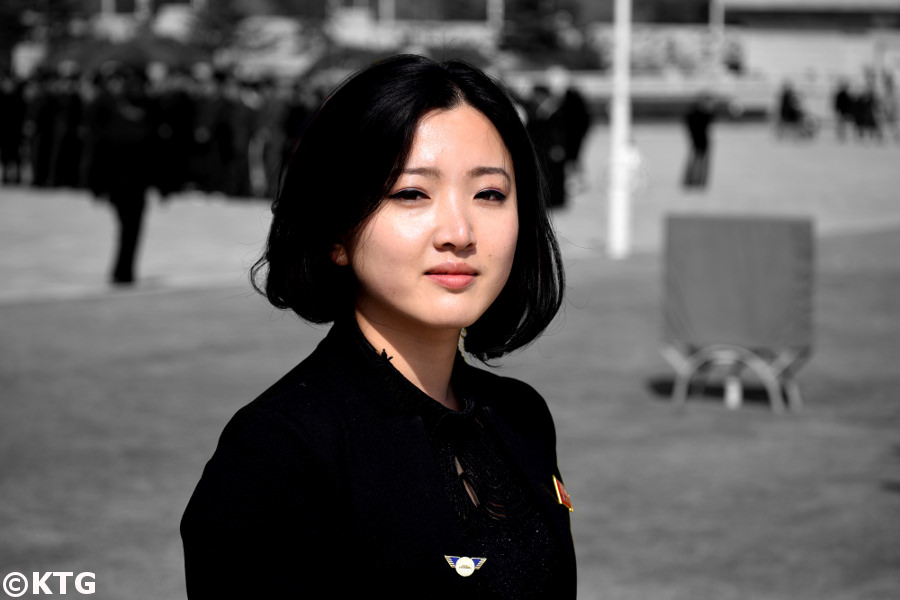 Photograph taken on our March tour in 2010. Back then it was called the Kumsusan Memorial Palace. You can see that they did not have the portrait of Chairman Kim Jong Il. This was only added after his passing away.

When Chairman Kim Jong Il passed away in 2011, the Palace was closed. It was then renamed the Kumsusan Memorial Palace of the Sun in February 2012 and was reopened to the public in December that year. 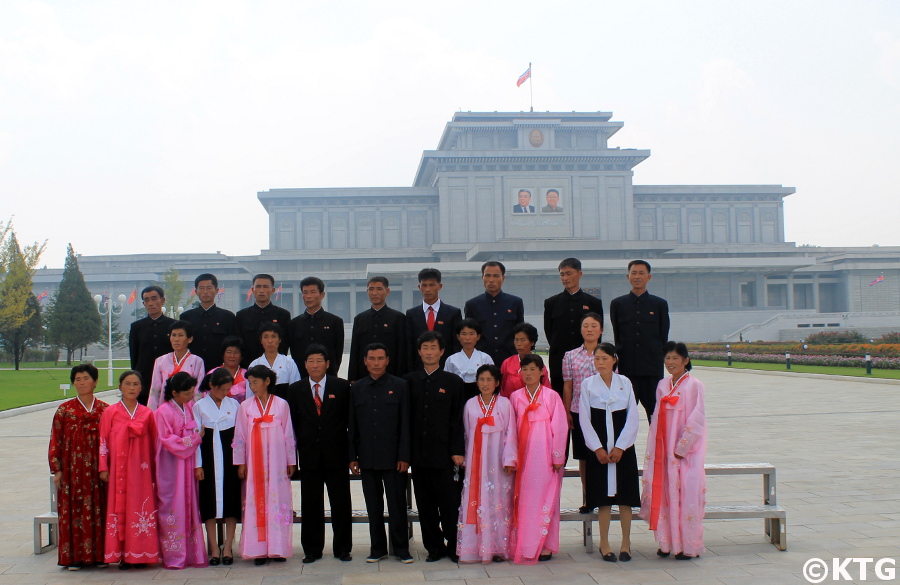 This grandiose building is the largest of its type and has halls that are up to one kilometre long. People abroad tend to call it the mausoleum of the Leaders but this is disrespectful to Koreans and they do not refer to it as a mausoleum.

The Kumsusan Palace of the Sun is only opened to foreigners on Thursday and Sunday mornings and on special occasions such as the birthday of the Leaders. 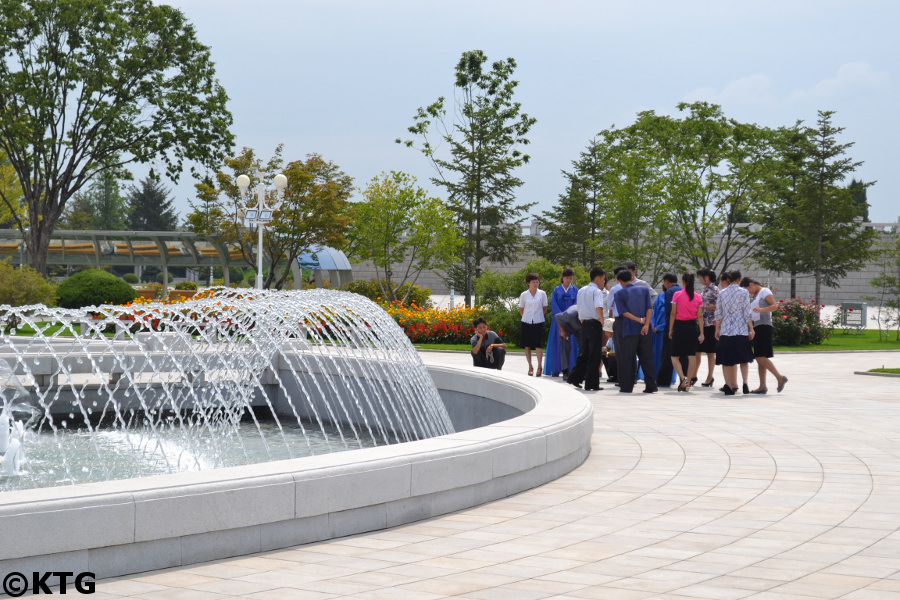 The evening before going our Korean guides will tell us that this is the most sacred place in the DPRK and will remind us that we are to wear formal attire when going there.

Morning of the Visit

We leave our hotel between 8 and 8.30 am. The drive there takes around 15 to 20 minutes from downtown Pyongyang and we must be there before 9 am. Once we arrive and if early we go to the waiting hall outside the Palace. Upon arrival our guides will go over the rules in the Palace and will ask us turn our phones off. 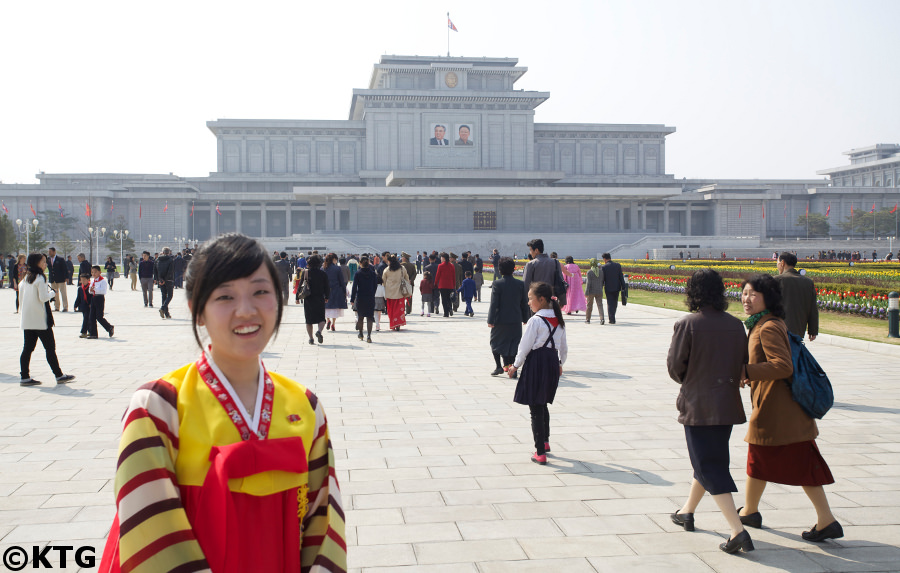 Our Korean guides will let us know when we are ready to line up. We have to line up in an orderly manner, each line consisting of 4 people. Groups are all lined up in a specific order.

The local staff will check a list where each group and the number of people in the group is listed. The staff are from the Ministry of Foreign Affairs. They will check each group one at a time, see that the numbers in the group match the list and that everybody is appropriately dressed. We are then instructed to proceed into the building.

Inside the Kumsusan Palace of the Sun

We cannot take pictures or film inside the Kumsusan Palace of the Sun. You may want to check the following Youtube video to have an idea of what it looks like inside. If you do plan to go in person, we strongly recommend you to stop reading and to wait and see what the most important place in the DPRK is like in person.


Once in the building we go over a shoe sole cleaning machine. It consists of a damp cloth we stamp our feet on, then some brushes which rotate under our shoe soles and then a dry cloth that dries them. This takes us to the cloak room. 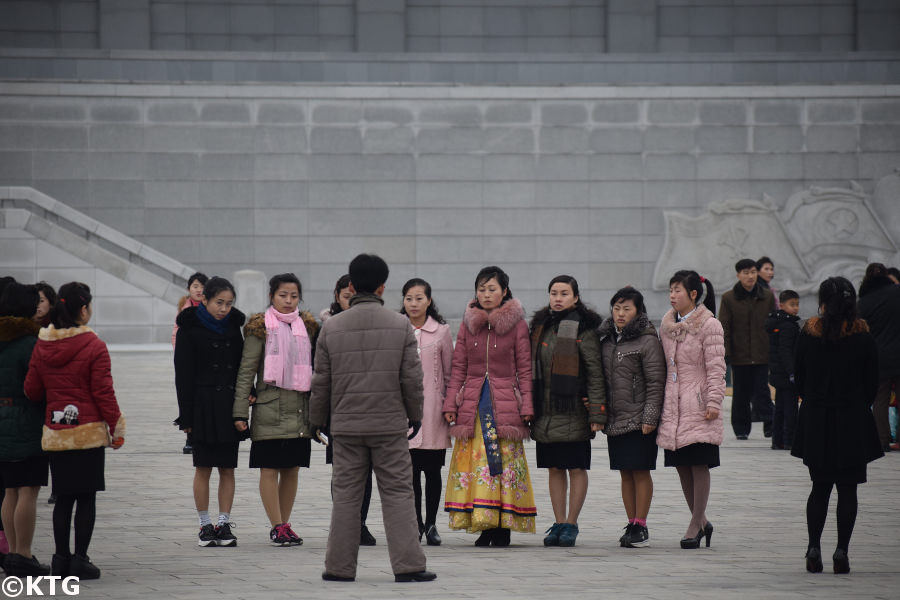 At the cloak room we leave our coats, any cameras, chewing gum, wallets, hotel room keys, etc. If you may need to take in any medication in case of emergency then that is fine but you should let our guides know beforehand. Jewellery is ok too as is too paper cash but not coins. For your reference, there is nothing to buy at the Palace. Other than that, we are asked to take absolutely nothing in. In fact our guides will recommend us to leave our wallets, phones, etc on the bus, where the driver will be throughout. Please note that after our visit in the building we go back to the cloakroom to collect our belongings and then head to the square of the Palace where we can take pictures. So if your only device to take pictures is your phone then remember not to leave on the bus but to take it to the cloakroom.

Once our belongings have been handed in, we line up again in our groups and again 4 people by 4 people. We then take an escalator to a section where we will be scanned, one by one. Men go to one line, women to the other. After the body scan process, we regroup and line up again, 4 by 4, and the proceed to the travelator. As you look out of the windows you will see the Palace on one side and a moat and grape vines on the other. 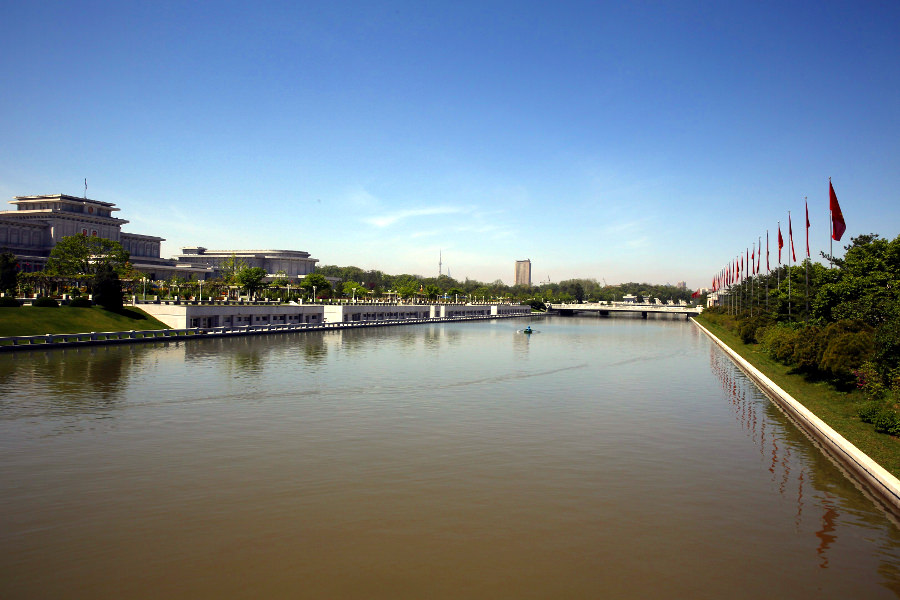 As we walk through the long, marble corridors in an orderly manner, we will see armed, tall DPRK soldiers in high leather boots standing perfectly straight guarding the Palace. We occasionally do bump into groups of soldiers marching quickly and in flawless unison inside the Kumsusan Palace of the Sun. 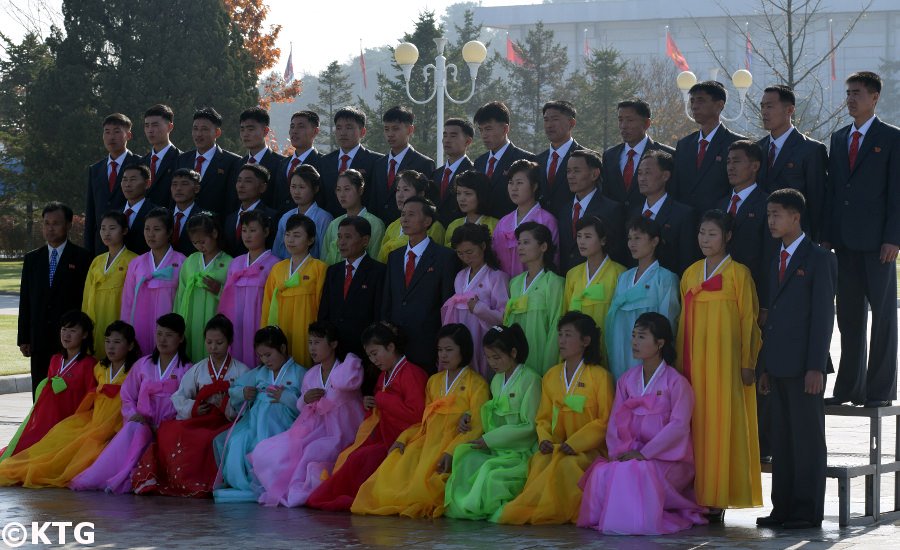 We next visit two giant, coloured statues of the Leaders. We are asked to wait at the entrance of the hall where these two statues stand, at all times in our lines consisting of 4 people. Then, when indicated, we proceed to move line by line toward the statues. The first line stops by a black line on the ground, this is the point where the first line of 4 people stops and bows. When they stop, all the lines behind them stop, each line keeping the same distance from one and other. But only the line that is at the front bows. Once that line is done bowing they keep walking, this time one by one, out of the hall, and the line that followed them moves on to the black line to bow. 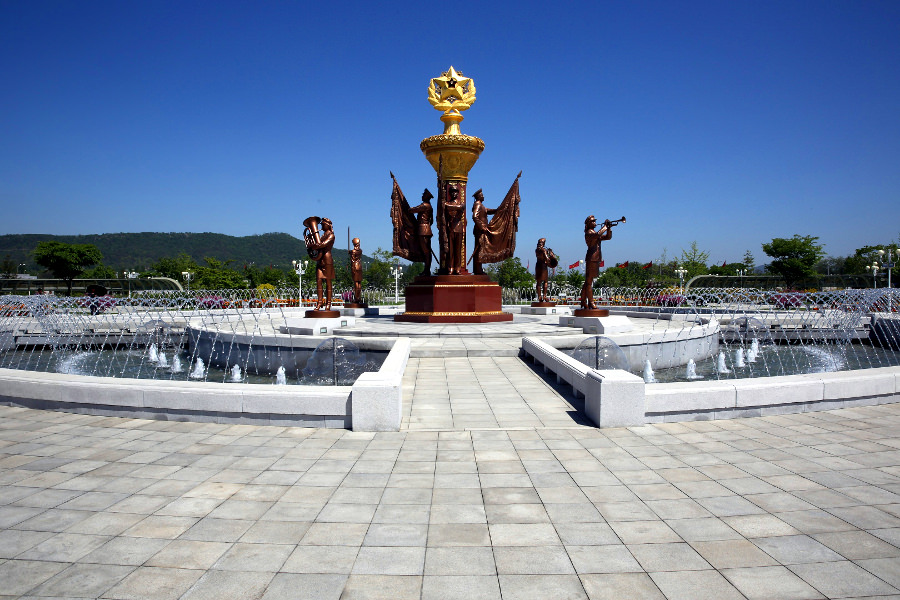 Another area of the Kumsusan Palace of the Sun that we see is the Hall of Lamentation. Here the local guide will softly explain how the Leaders cases were placed here when they passed away. We visit too rooms with medals, awards and gifts given to the Leaders. These include awards given by other world leaders as well as pictures with them. 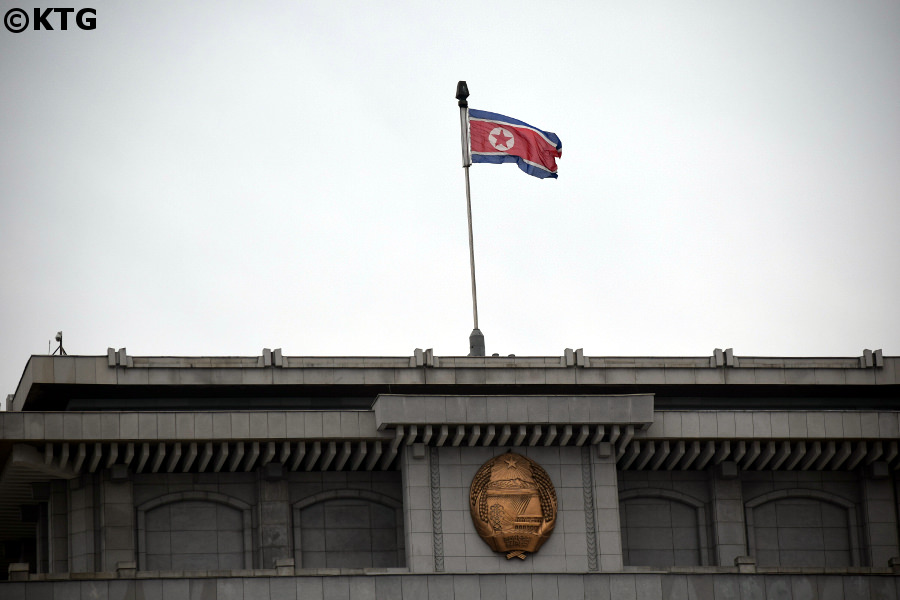 Visitors are taken too to a hall showing giant maps explaining where President Kim Il Sung travelled to by plane and by train. These maps have red and blue lit lines. The red lines show routes taken by train and the blue ones show the ones taken by plane. Information displayed shows total distance travelled. The train used by President Kim Il Sung is in this chamber. You then see a chamber with the same information and maps for Chairman Kim Jong Il. There they have the train where he passed away. You can see his office, desk and computer in the train. Chairman Kim Jong Il passed away on his train while on a visit to a fish farm. 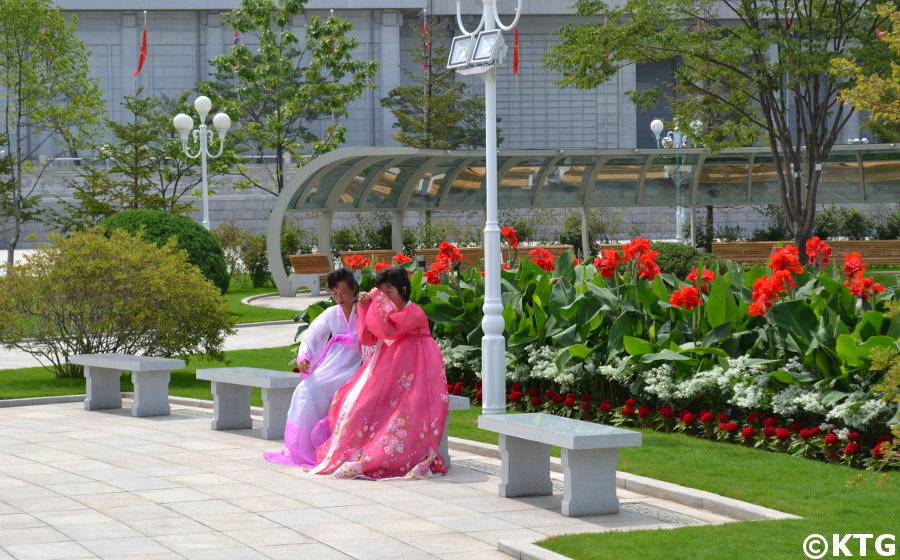 Other transportation vehicles visitors shown include two Mercedes Benz and a golf cart used for on the spot guidance and, last but definitely not least, Chairman Kim Jong Il’s yacht on a plastered mock-up sea.

The most important part of the trip is of course seeing the Leaders lying in state. The bodies of each Leader are in separate chambers. Before approaching each chamber we line up one by one and go through an air blowing device that blows high pressure air to the right, left and top of our bodies to ensure that we carry in no dust or dirt into the chamber. Once we enter the chamber we will see that it is dark, just dimly lit with a neon red light around the hall at the top. The atmosphere is sombre and funeral like. It is very common to see locals crying here. We approach the glass coffin, again in lines consisting of four people. We first bow at the feet of the body of the Leader, then walk around the body, stopping and bowing at its right side, walking behind it and then stopping and bowing again at the left side of the body. We do not stop and bow behind the head. 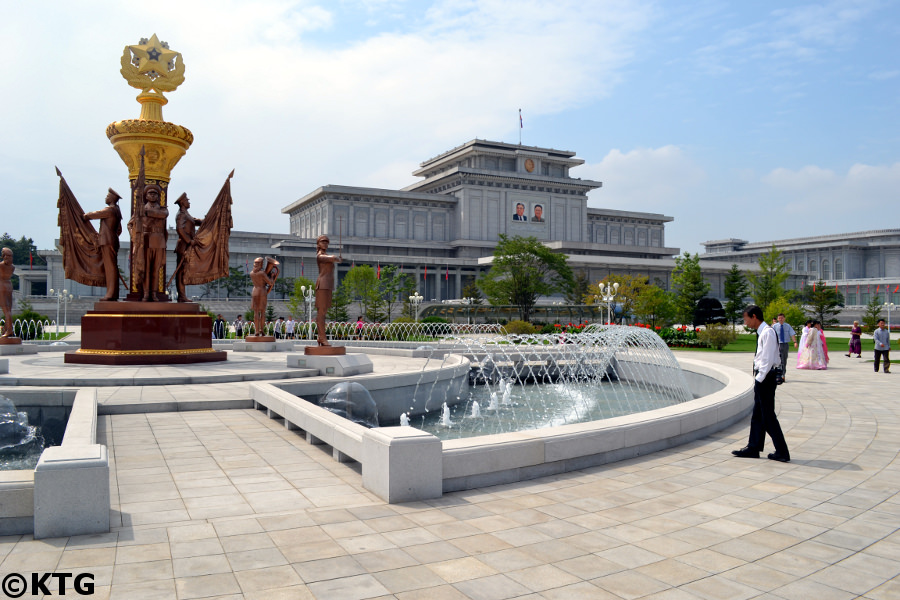 When visiting the chamber of the other Leader we go again through another air blowing machine and the exact same process is repeated.

After the visit we head back to the cloakroom, pick our cameras, and head to the square of the Kumsusan Palace of the Sun where we can take pictures.

Rules regarding the Kumsusan Memorial Palace of the Sun

We cannot stress enough how important this place is to Koreans. It is not a tourist place and some straightforward but extremely important rules must be followed. Please note that we will brief you before the tour regarding this.

Behaviour in the Kumsusan Palace of the Sun 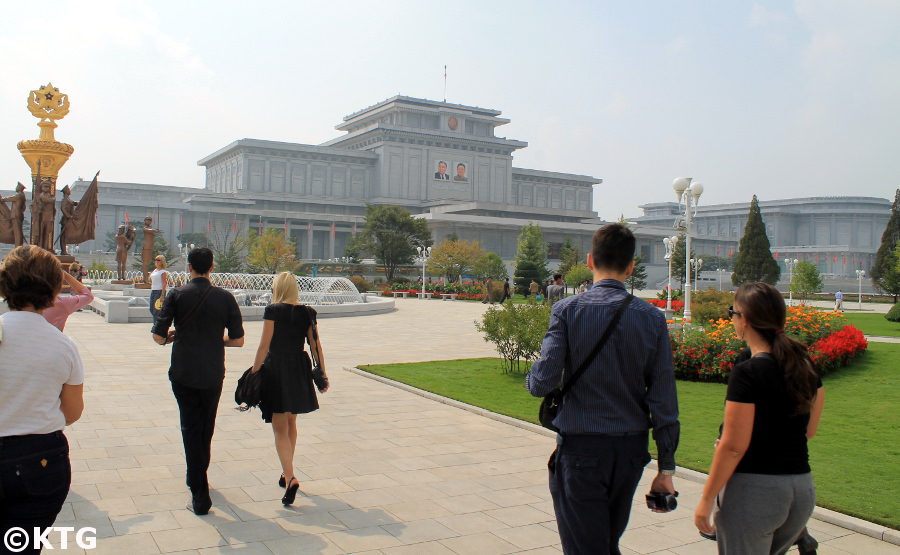 We are required to dress in formal clothes when visiting the Kumsusan Palace of the Sun. It is up to the local staff members to let travellers in or not, not to our local Korean guides

Please note that children under 17 cannot enter the Palace. We usually a trip to Pyongyang Central Zoo for children as it is close by to the Palace of the Sun.

Koreans go to the Kumsusan Palace of the Sun. It is common to see people from the provinces visit and it is frequently easy to see their sheer surprise when seeing Westerners. Remember that for those coming from rural areas and smaller cities, it may be the first time for them to see foreigners. As we cross our paths on the travelators you can see them look at us in amazement and sometimes discretely nudge the person next to them so they can have a look. People usually come here in their work units.

There is actually a tram for locals taking them to the entrance of the Palace.

When we go on a national holiday we usually see high ranking officers as well as foreign diplomats.

Go from our Kumsusan Palace of the Sun section to our pages on places that can be visited in the DPRK. Please note that this place is not a tourist place.