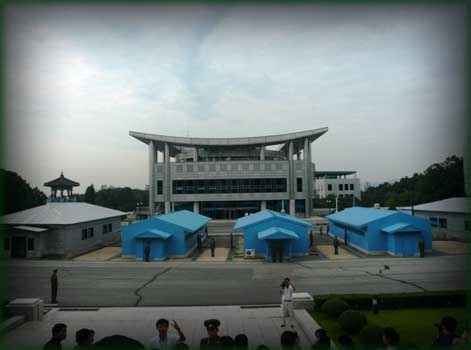 Demilitarised Zone North Korea (DMZ) - moment before entering the Military Armistice Commission Hall. South Korean soldiers can be seen in the background. This place is probably one of the most sensitive in the world which is why you must carefully pay attention to what the guide says and follow their instructions.

North Korea has an active military personnel of over 1 million people, making it the 4th largest military on Earth. Its reserve force is of almost 5 million people and it has the highest ratio of active soldiers to citizens in the world, with almost 50 active troops per 1000 citizens, over ten times the US ratio. Please click here for more information on the North Korean military.

Please click here to go back and see more pictures of the Demilitarised Zone North Korea.