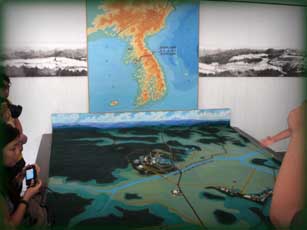 DMZ North Korea - in the image above a North Korean soldier explains the way the demarcation line runs.

The DMZ is 250 km long and 4 km wide, running roughly across the 38th parallel from the east coast to the west coast of the Korean peninsula. People are not allowed in the DMZ (apart from in Pamunjom and on the Donghae Bukbu line on the east coast) and as a result this buffer zone has become one of the richest wildlife reserves in the world. Animals that were about to be extint, such as the Korean wildboar, many birds such as the black-faces spoonbill. Some scientists even believe to have found traces of a Korean subspecies of the Siberian tiger.

Please click here to go back and see more pictures on the DMZ North Korea.